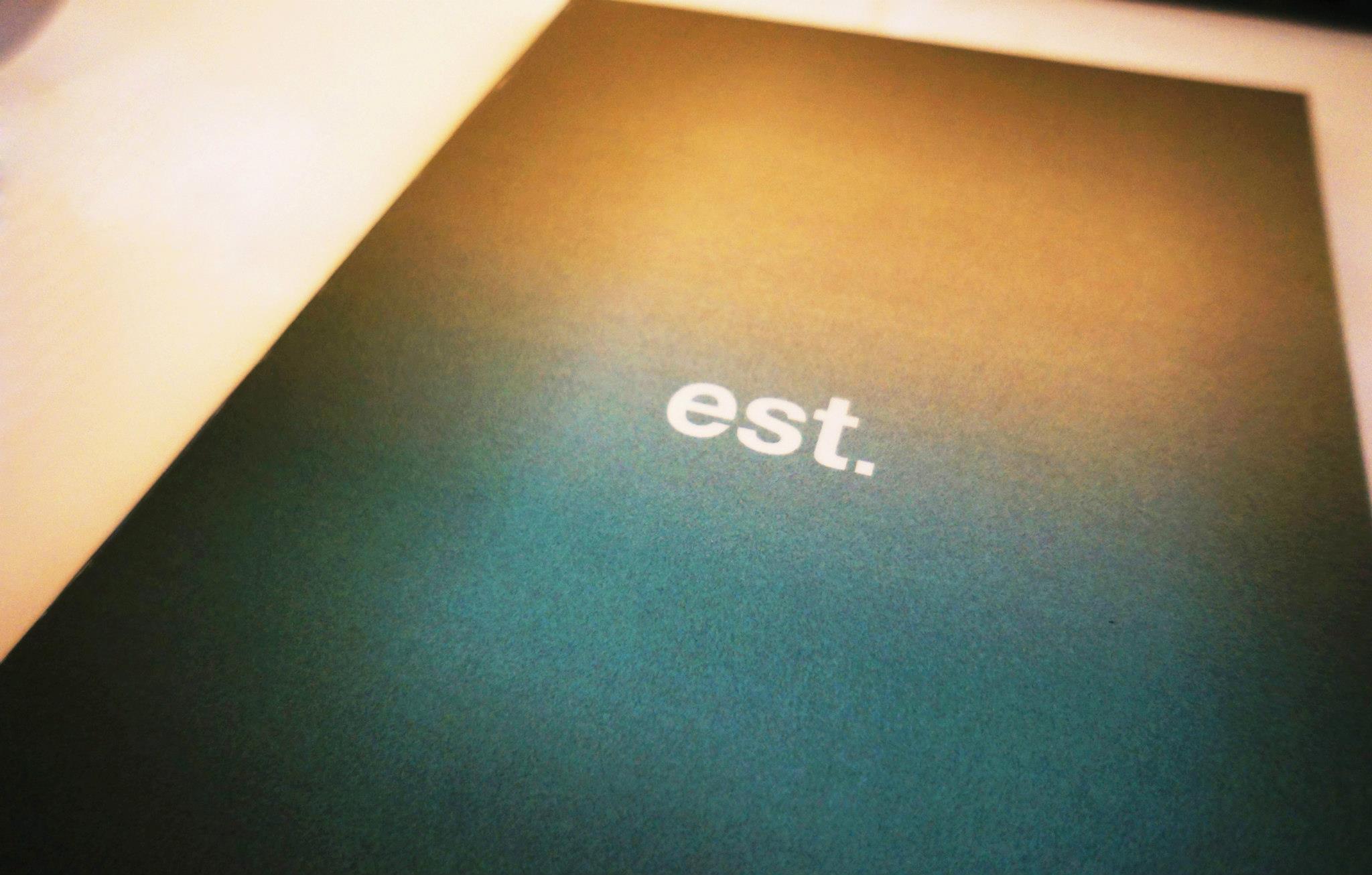 Est. is the first three chefs hat restaurant to be reviewed on this blog! I’ll try and keep this one short even and let the pictures speak for themselves 🙂 For those who don’t know, Est. is part of the Merivale chain which has a number of popular restaurants and bars (Such as El Loco) in Sydney.

The restaurant is based on top of the Establishment bar and part of one of two major complexes run by Merivale (The other being Ivy). The cuisine would be best described as Modern Australian fine dining, less unique than Quay or Tetsuyas but definitely worthy of the chefs  hat awards. 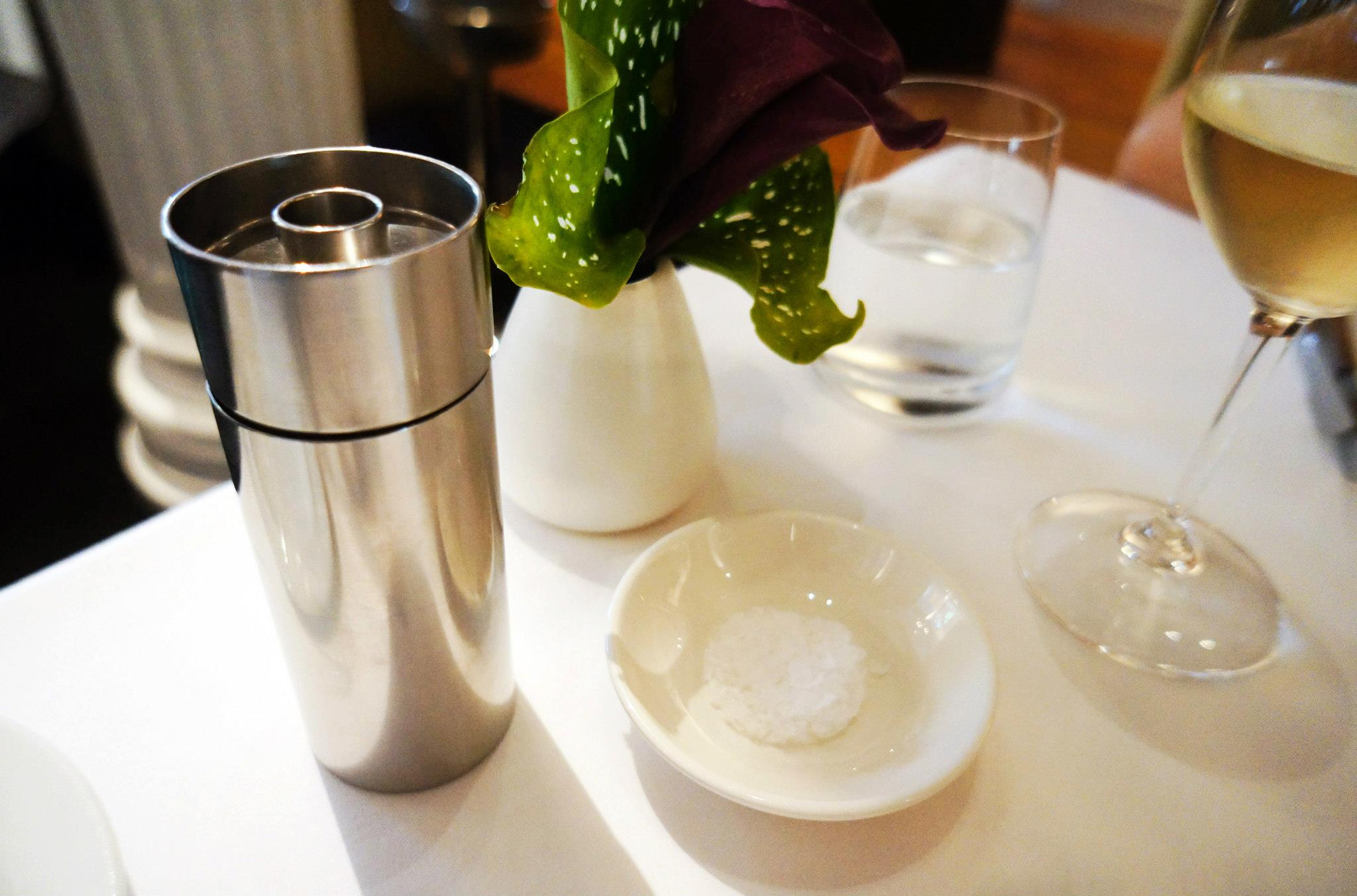 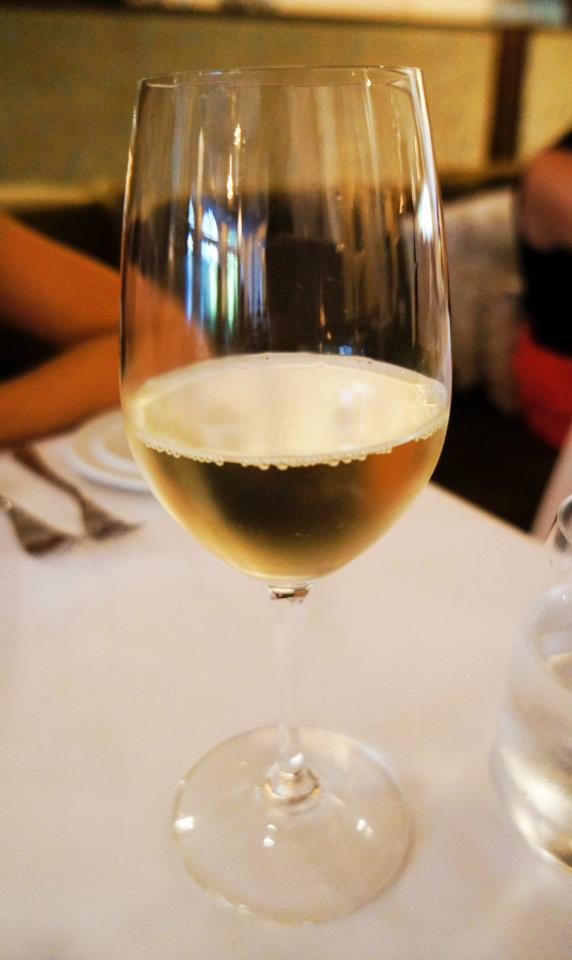 We opted for a half bottle of white wine, Miss K isn’t a big drinker so half bottles are generally the best bet for us when we go out. This bottle in particular was light and easy to drink, I’m not exactly a wine connoisseur so I can’t comment much more, perhaps someone else can? 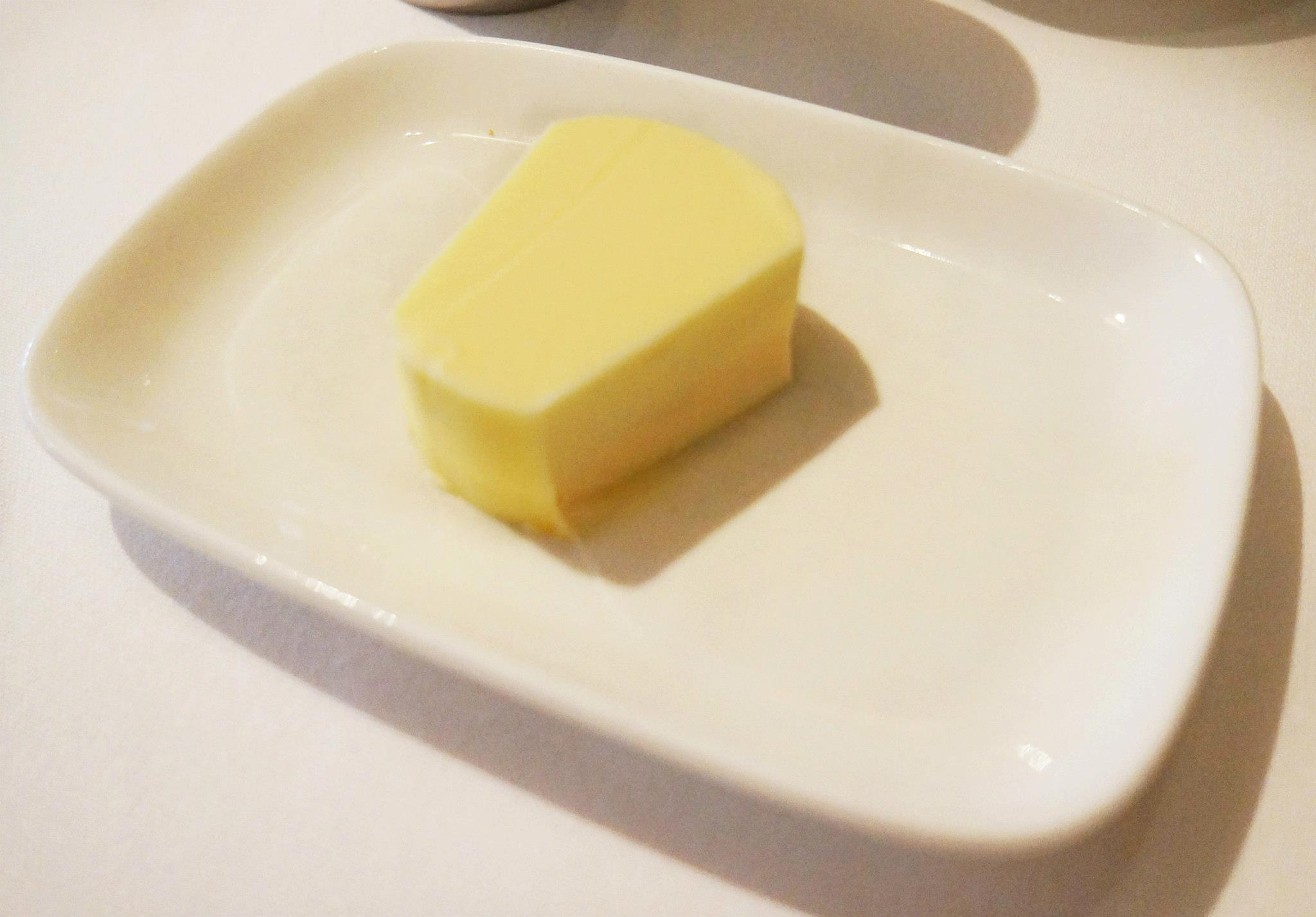 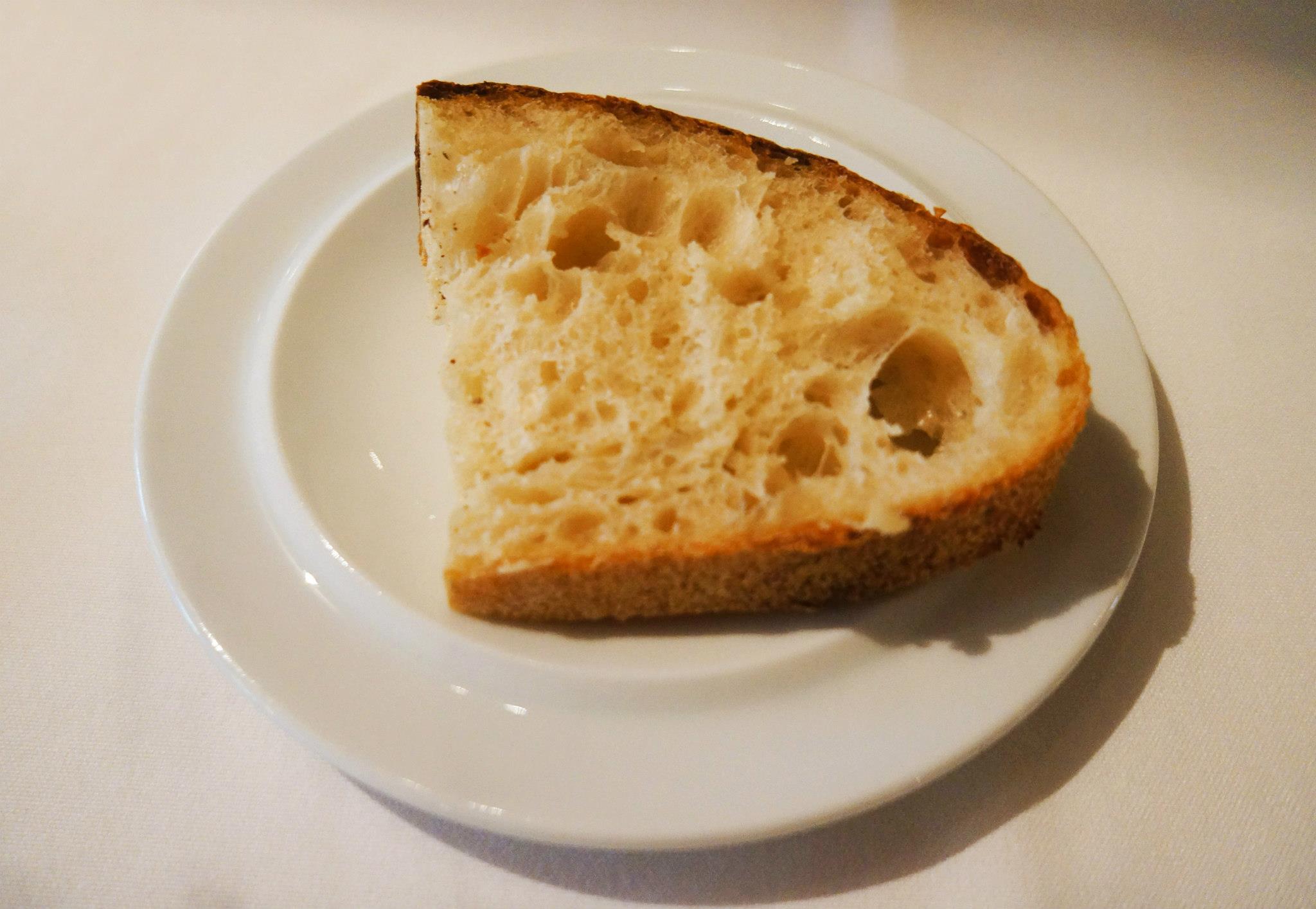 After deciding on our meals the chef came by with a plate of assorted bread we were able to pick from, definitely a nice touch and the choice of freshly baked bread was nice. The service here is impeccable, waiters come when you need them and they don’t bother you when you’re eating. 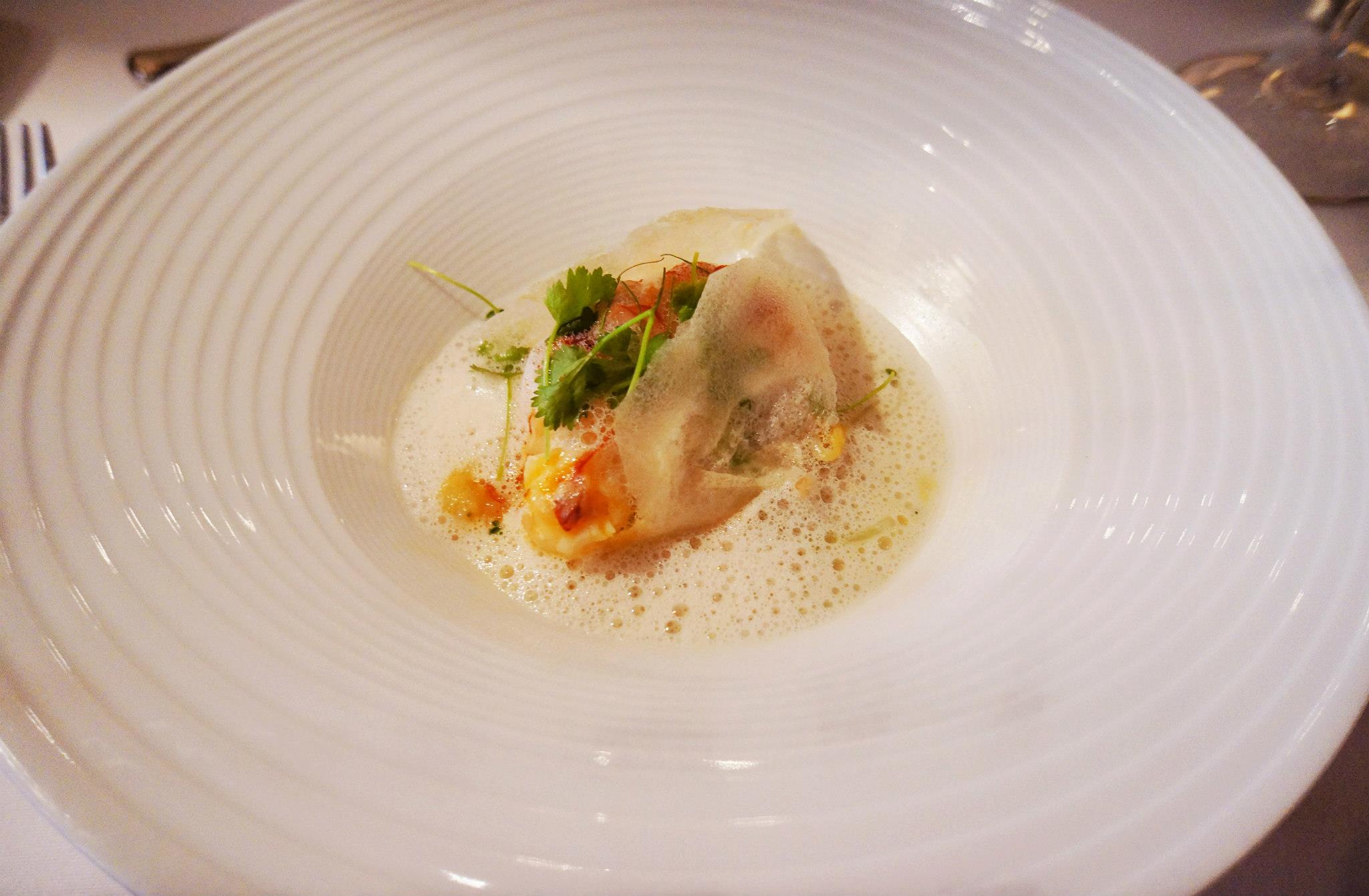 I hadn’t had any sort of lobster in years until I ordered this as an entree. It was originally one dish we were going to share but the waiters at Est. split the meal into two dishes for myself and Miss K, definitely a thumbs up for service. After my taste I knew Est. was going to be one really good meal, the Asian flavours of the dish combined together so well and the lobster was perfectly tender. I could have happily eaten the whole lobster for my meal, it was that amazing! I wish I could describe the taste but words won’t do it justice! 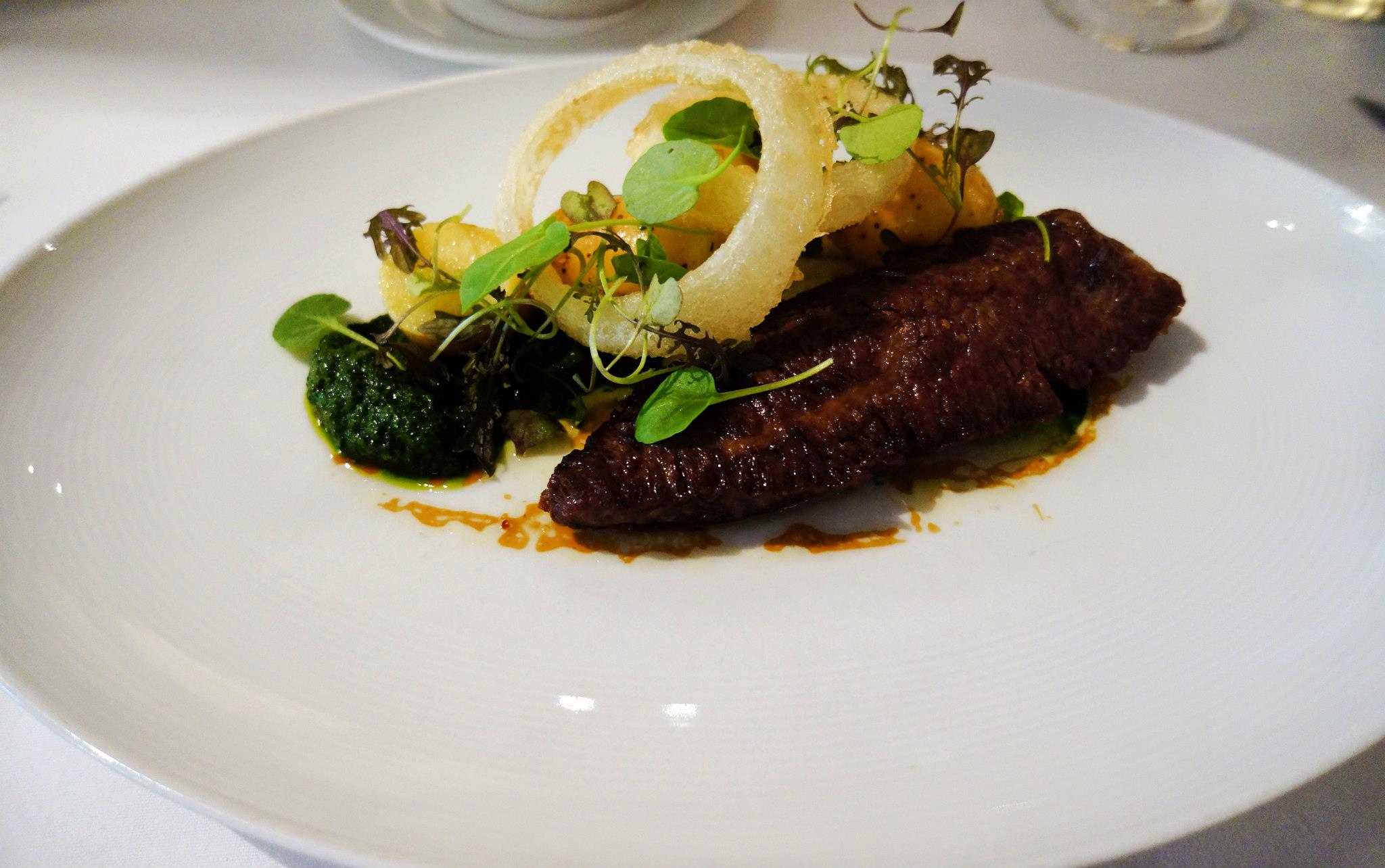 I forgot to mention that the entrees and mains were served in unison, two waiters would appear and drop the dishes at the same time explaining to each of us what the dishes were. I chose the Wagyu skirt for my main and definitely did not regret it, this was the first Wagyu I’ve ever had in Australia that compared to those in Japan. Perfectly cooked and accompanied with great sides, the meat was tender and cooked exactly to medium rare as I requested, I particularly liked the parsley sauce which I believe was mixed with lemon or lime. 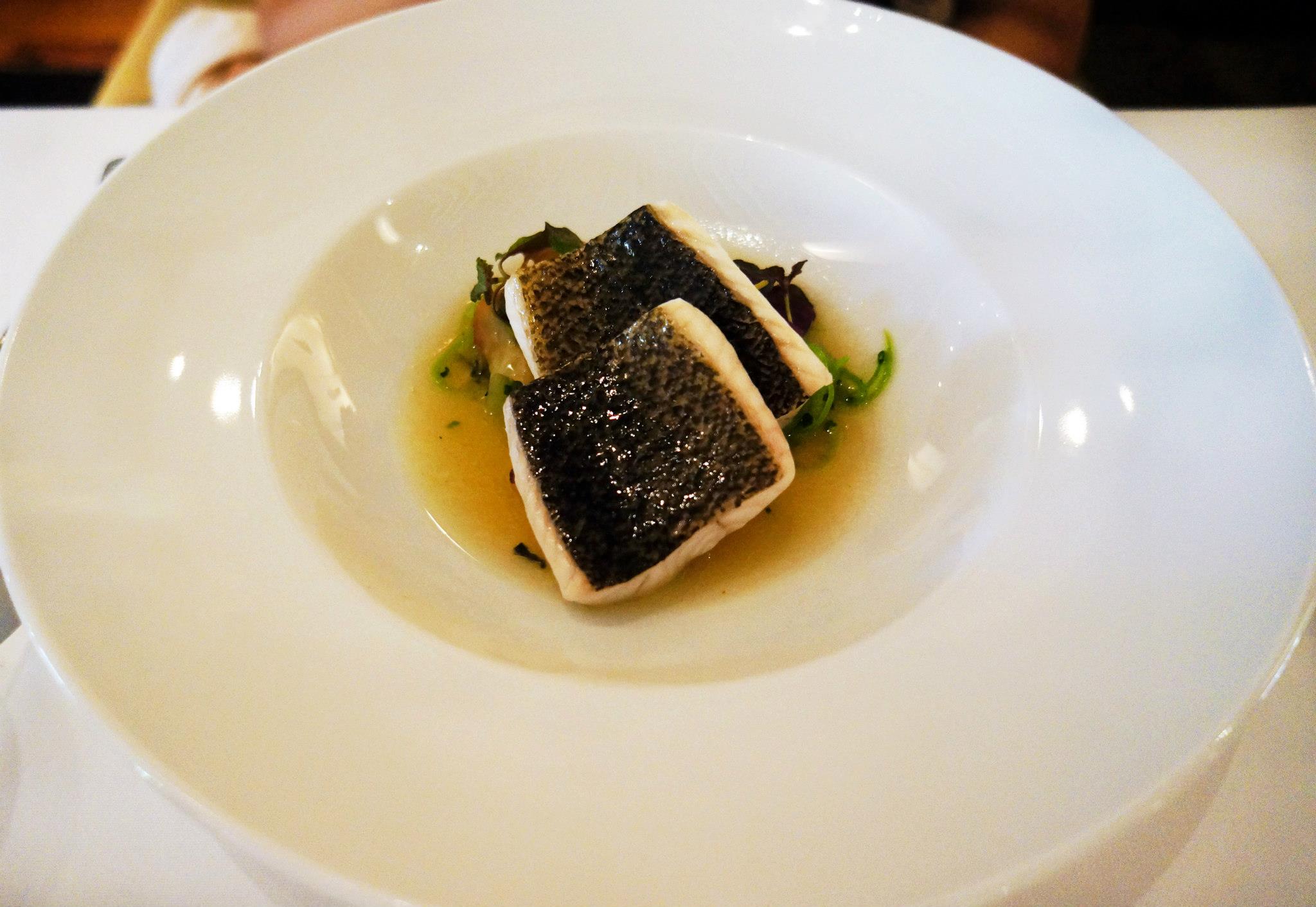 I’m sure you noticed by now that the presentation of the dishes are great, unfortunately this photo doesn’t do the dish justice. The fish was served without the sauce/soup which was poured onto the dish as it was served to Miss K on the table, a nice touch and definitely interesting. I have to say this dish was another interesting fusion of Modern Australian and Asian cuisine. The fish was cooked perfectly and the flavours again went really well together which seems to be a strong point for Est. in all their dishes. 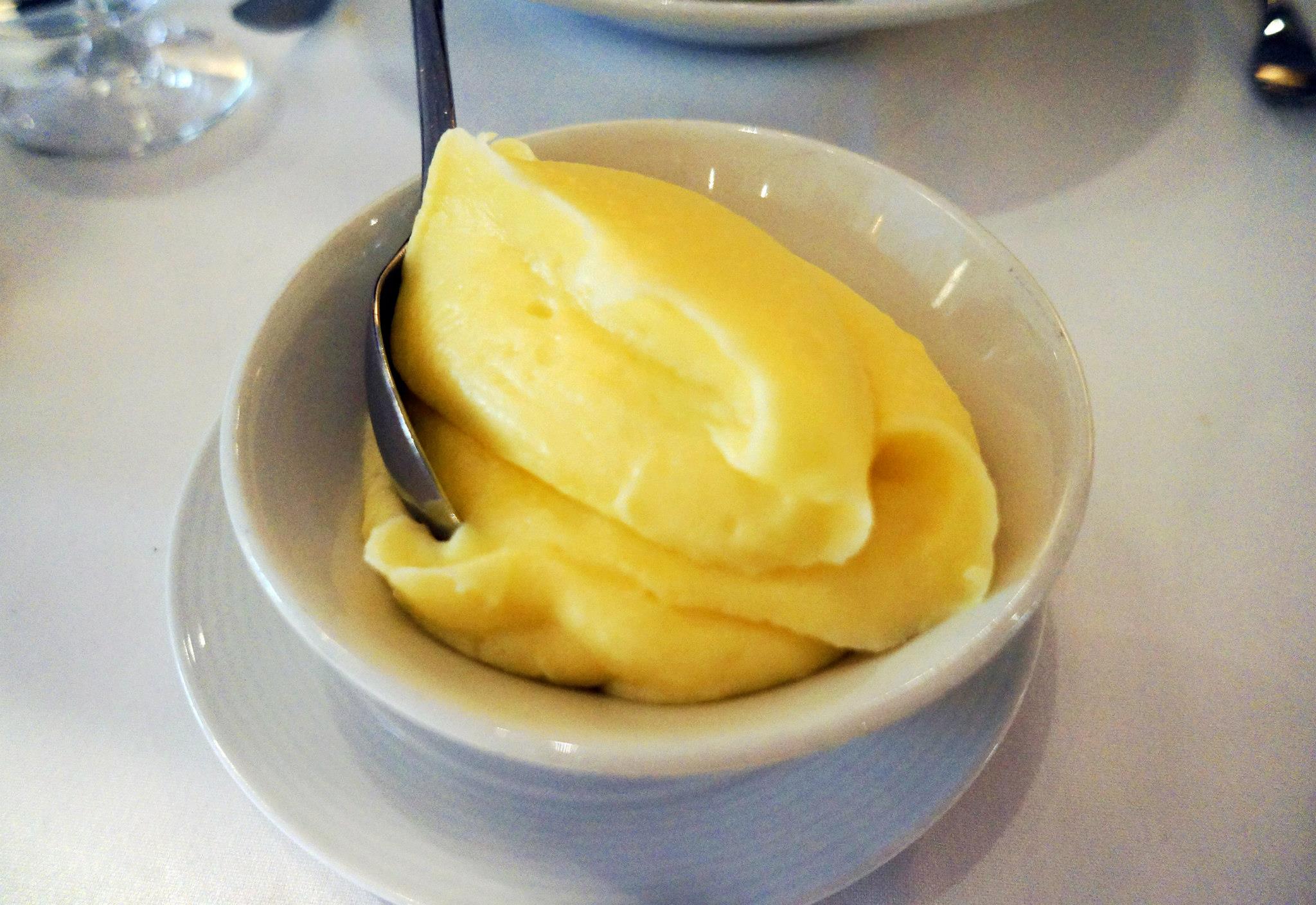 I just needed to comment that the side of mash potato we ordered was delicious, can’t say it was ‘unique’ but it was definitely good creamy mash! 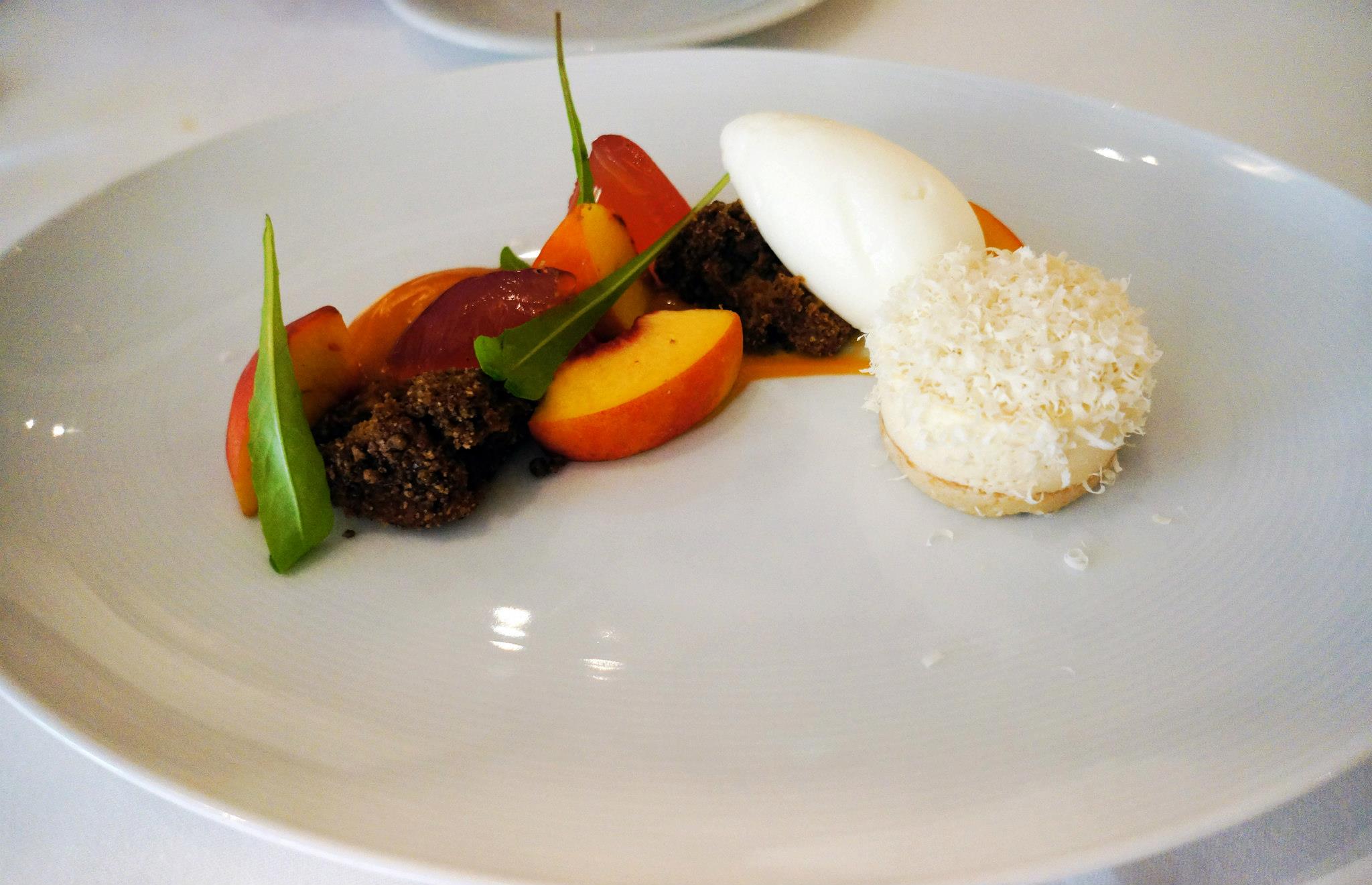 Dessert was an interesting one, I don’t have the exact name but this is what I recall was in the dish. This was probably the best dessert I’ve ever had in a restaurant, my prior favourite was either the Pear Sorbet at Movida or the deconstructed cheesecake from Seaduction. The ice cream was icy cold and tasted AMAZING and my favourite part of the dish. The coffee crumble and cake were also delicious, the fruits were sweet and fresh, I kind of expected the peaches to be sour but I was wrong! 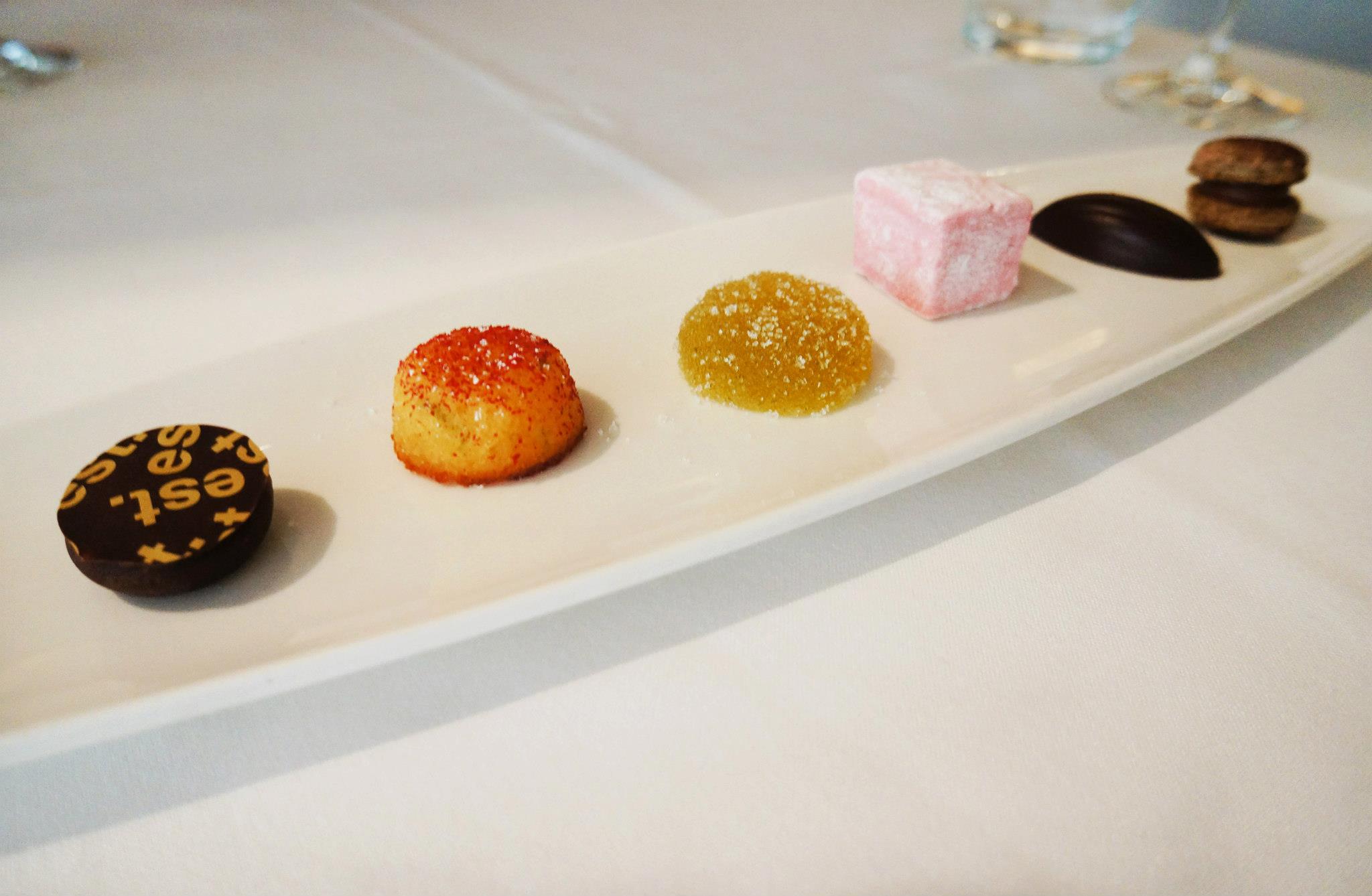 Finally to finish off we were presented with assorted Petit Fours, this was complimentary as I didn’t order the dish so definitely a nice way to finish off our meals. I won’t say any of them were ‘exceptional’ in any way but they were delicious! We had a mix of chocolates, macarons, turkish delights and sugar coated jelly.

Overall the price point for Est. makes it an enticing visit, I’m sure it’s not as exceptional as Quay or Tetsuyas but it is definitely up there with some of the best in Sydney. Since the meals were so cheap in comparison I would even consider a revisit some time in the near future!