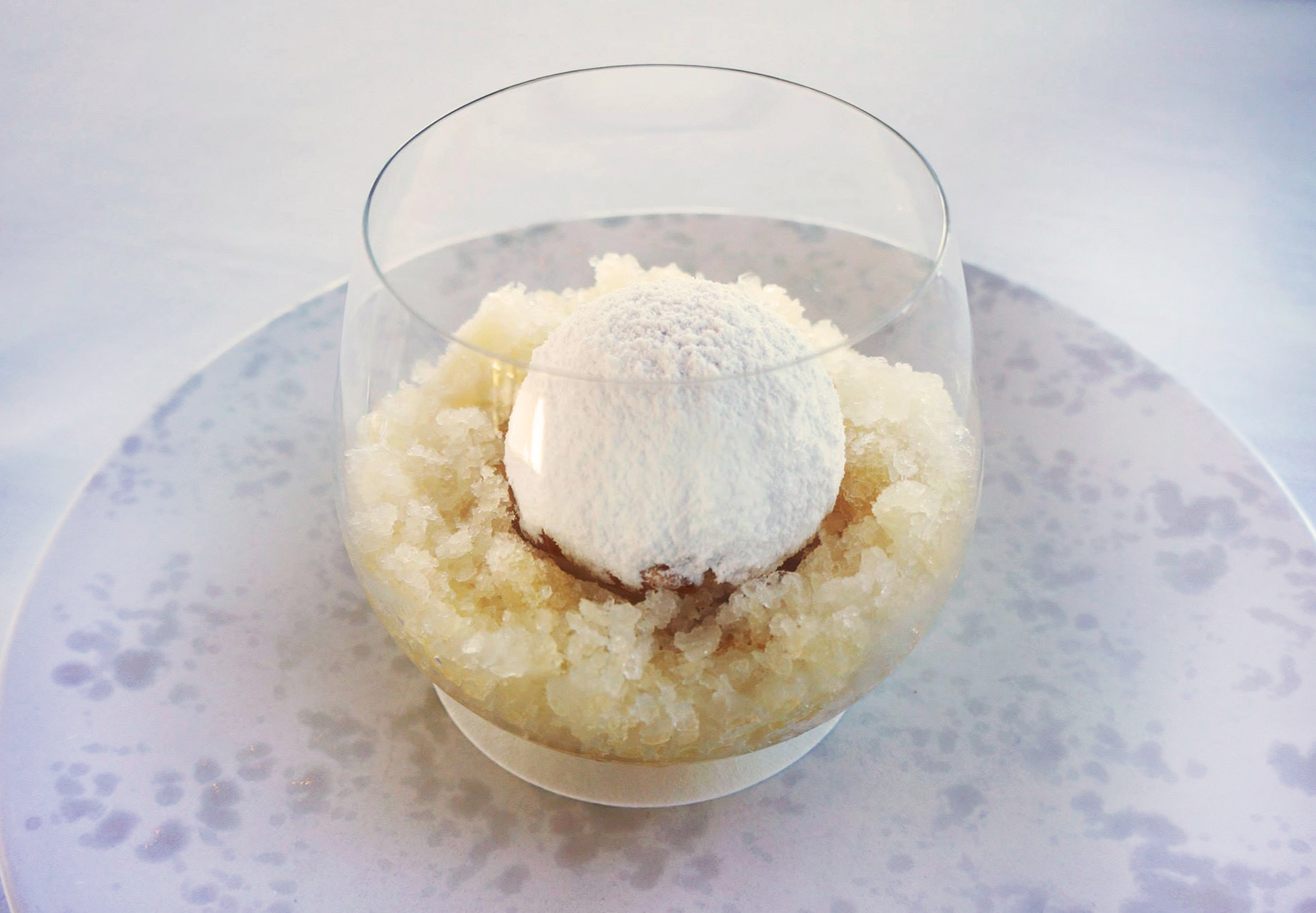 Yep we finally visited Quay Restaurant! That signature snow egg in the thumbnail is one of the most iconic dishes in Australian fine dining and Miss K and I finally got to experience it after months of waiting 🙂 I booked the lunch some time in May for a September visit because dinner was just too difficult to get a booking for on certain nights, luckily this also meant the lighting was very bright when we dined and the dishes were presented beautifully in the tower section of the restaurant. The restaurant itself is situated on the second level of the Overseas Passenger Terminal with views across Circulay Quay and  Sydney Harbour.

As most of you probably know, Quay Restaurant is arguably the best restaurant in Australia (Attica may have stolen that crown) and is definitely the top in Sydney. The restaurant made a massive foray into the public eye back in 2010 when Peter Gilmore’s signature dessert, the Guava Snow Egg was featured in the Masterchef finals. Since then the demand for bookings at this establishment are next to impossible to secure unless you book a few months beforehand, especially on Fridays and Saturdays – credit cards guarantees are required. 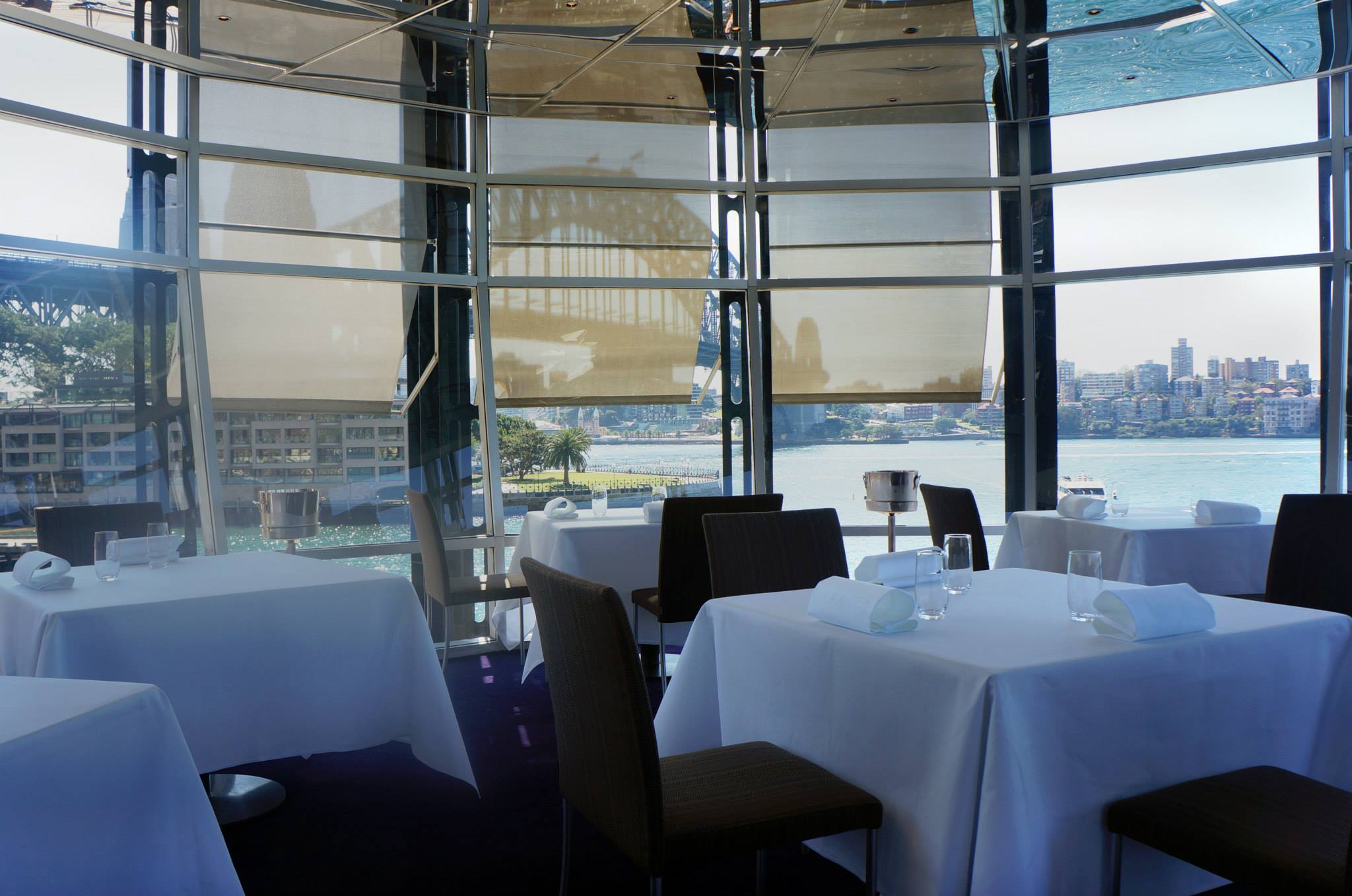 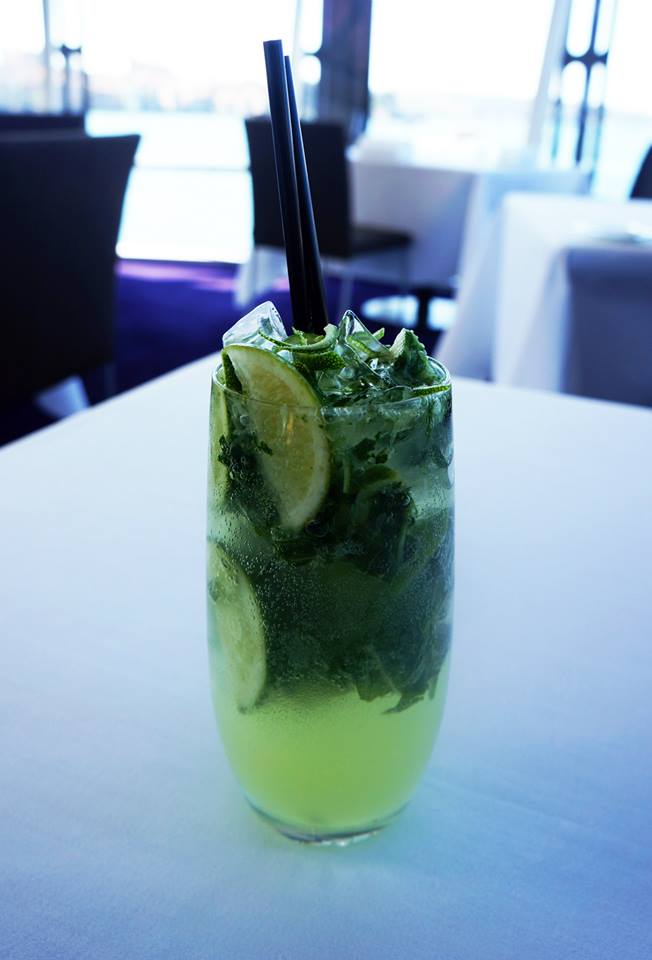 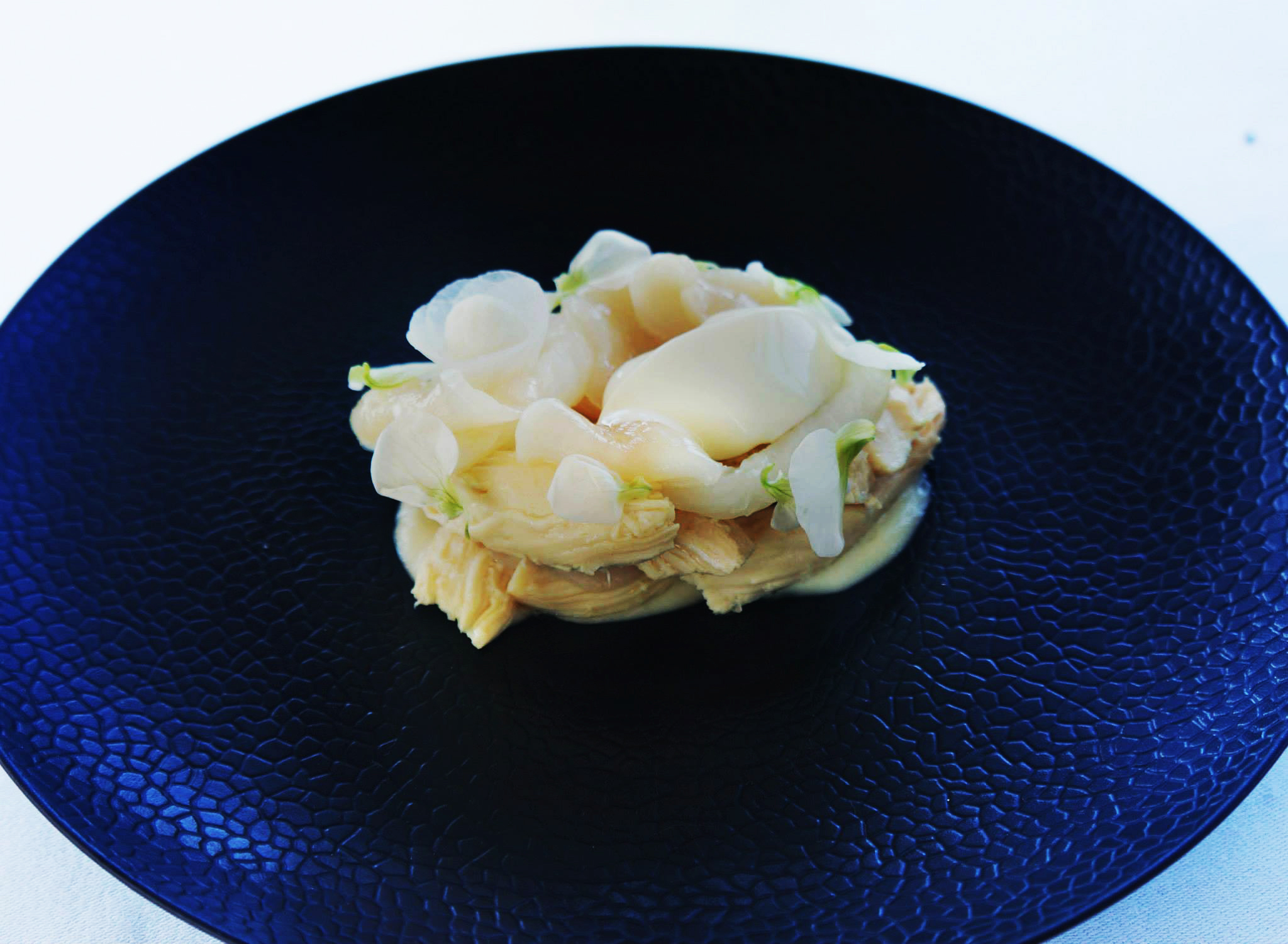 Miss K and I decided to go with the four course lunch menu over the degustation as we liked to be able to choose the specific dishes to taste. The first choice by me was the fragrant poached chicken which actually turned out to be one of my favourite dishes. I’ve seen photos of this beautifully presented dish quite a bit over the years and it seems to be a popular item on the menu because of it’s accessibility being a simple chicken and scallop based dish. Since this was my first dish I wasn’t quite sure what to expect but was pleasantly surprised to find that it had a subdued yet perfect mix of seafood, sweetness and smooth texture – the flavours were very refined and tasted amazing. Trivia: The little flower shape on the top left is actually made out of individual 6-8 pieces of circular radish, how’s that for excellent plating? 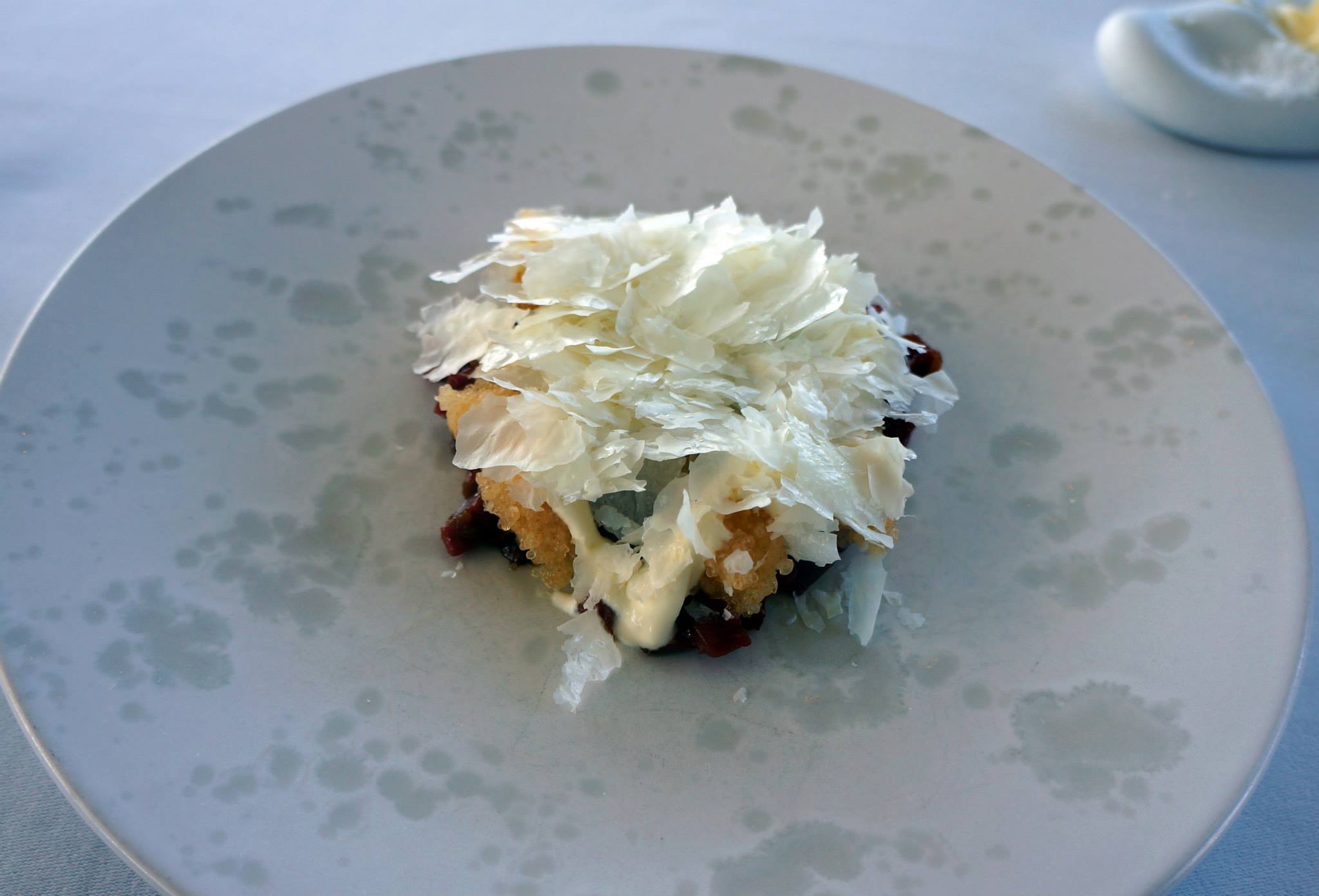 Miss K got this dish as her first entree course because of the smoked wagyu and horseradish juice. The dish came out quite interesting and not quite how I expected it to look, having tried a bit of the dish my comments are that the wagyu and cream go quite well together but I’m not quite a fan of the dory roe. Miss K really enjoyed the dish and mentioned that the best part of the dish is how the wagyu almost literally melts in your mouth along with all the other ingredients to create a little taste sensation. 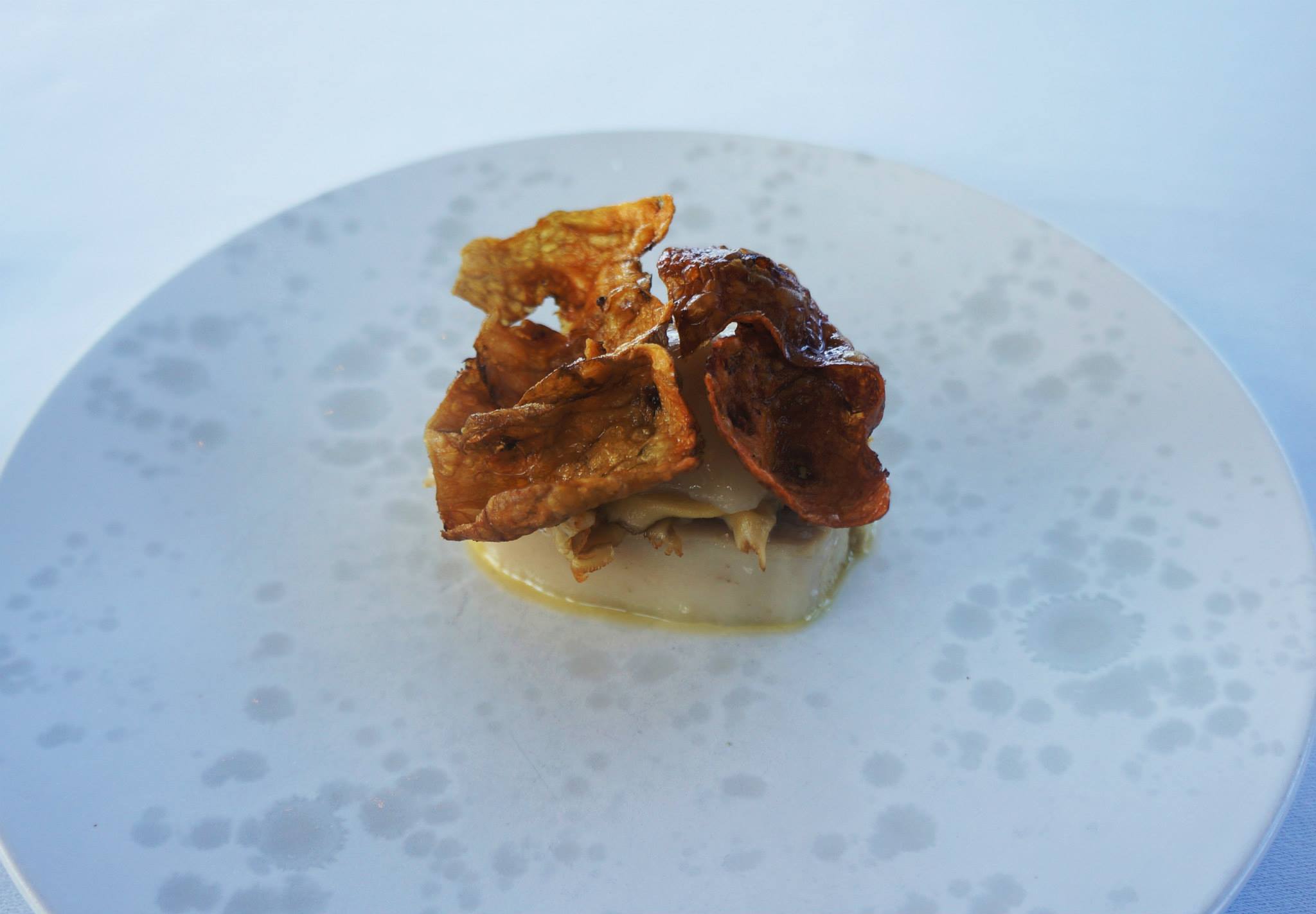 This dish was the second course picked by myself to follow the chicken. All of the ingredients were very appealing for me so I decided to go with this dish and see how it was made, it turned out to be very good albeit a little fatty. The dish is basically a piece of pig cheek covered with the mushrooms, raw scallops and artichoke leaves, each bite was quite a sensation because of how soft the meat was and how good it all tasted together. The meat itself seemed to sport quite a few chunks of fat in it but the taste well and truly made up for that. 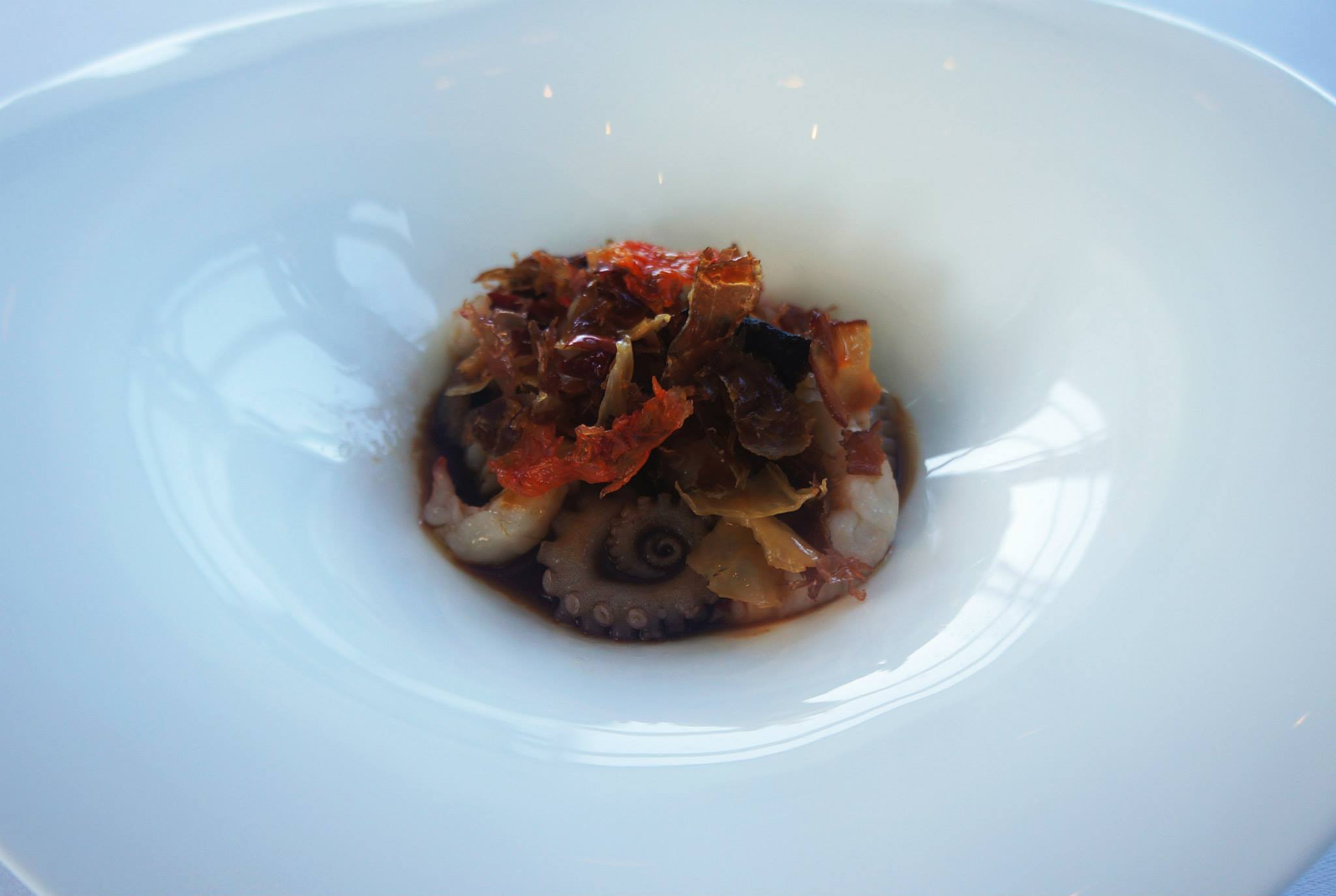 Miss K and I were both quite curious about what the XO Sea dish was all about because there was no description of what was in it. After chatting to the waiter we found that it was actually a seafood dish based on the traditional Hong Kong style XO seafood sauce. We decided to go ahead and order this dish for Miss K just to see how it turned out, Miss K seemed to really enjoy the Asian influence and strong seafood taste. I personally didn’t enjoy it at all since I’m not a large fan of seafood and the smell and taste was very overpowering. 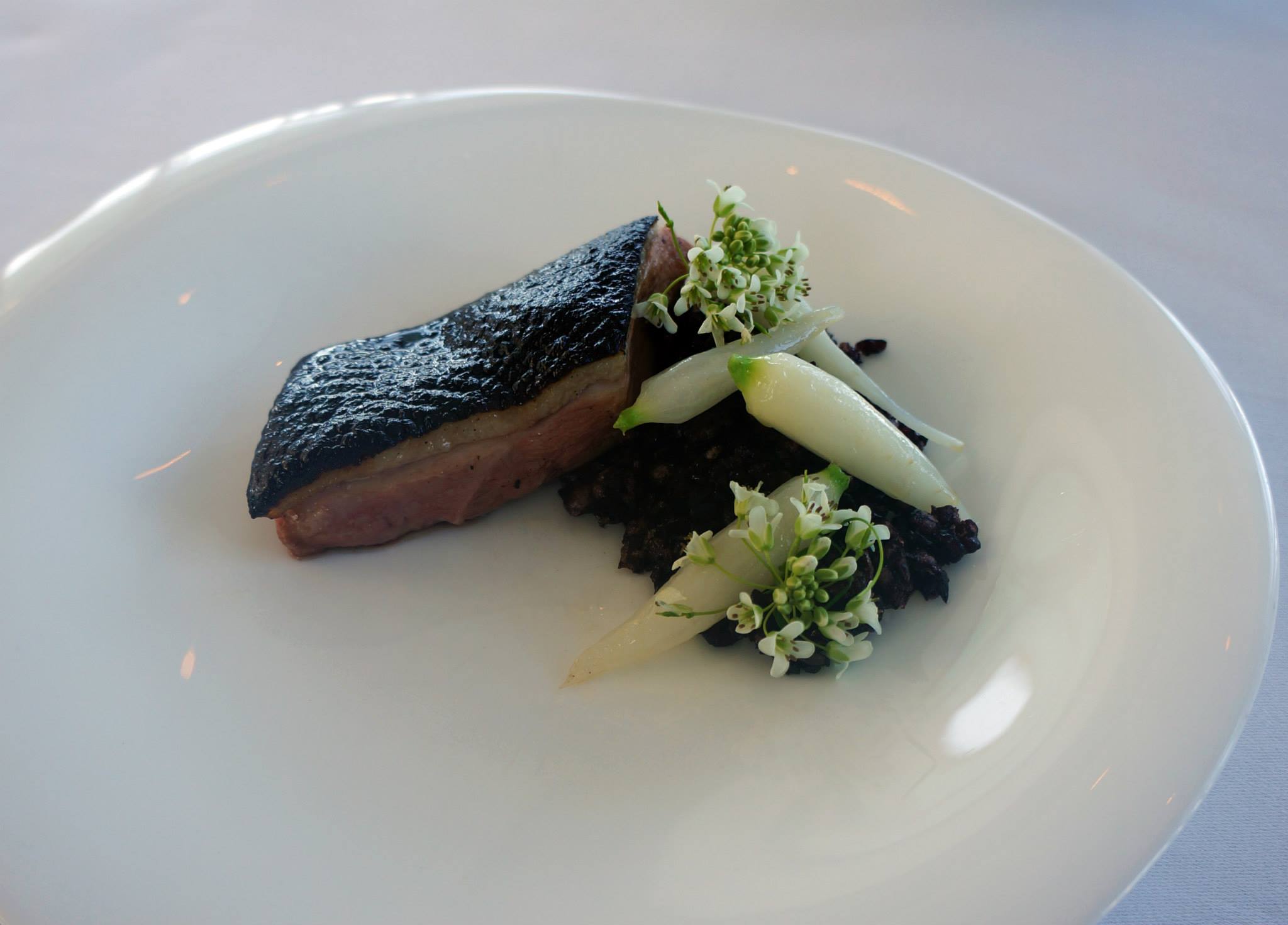 The last of my main meal courses was the roasted goose, I decided after going for traditional pork and chicken dishes I should give something different a go. The roasted goose caught my eye as an interesting alternative and also proved to be quite a delicious and interesting looking dish because of the black skin and rice. The meat itself was tough and had a slight game meat taste as I expected though this was heavily offset by the sharp and distinct flavours which were quite similar to duck meat, the rice was tough but had a rustic wholegrain taste. 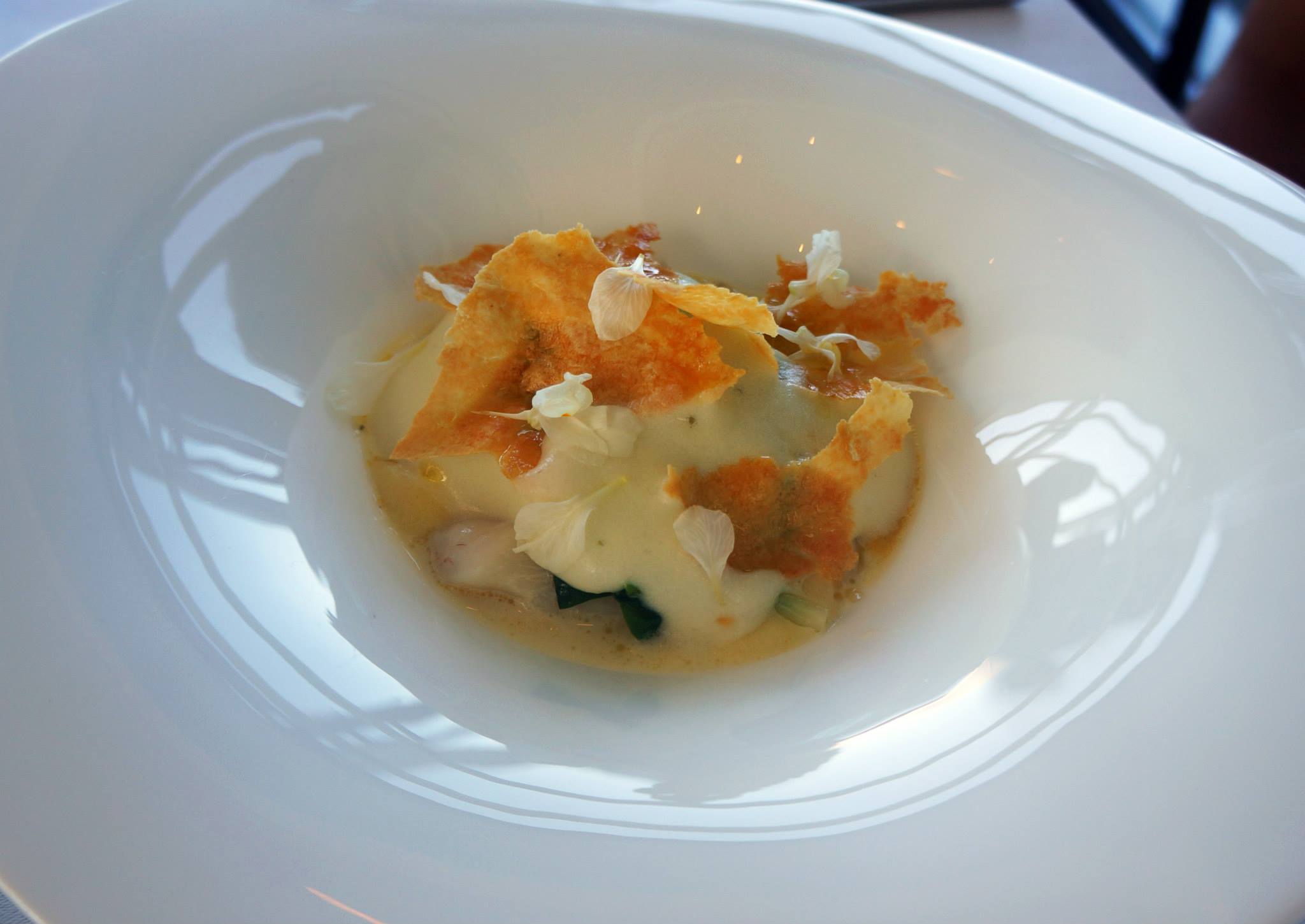 Miss K decided to go with the fish for her last meal course and was very happy to see that the presentation looked deliciously creamy. The fish itself was quite soft and was very difficult to distinguish from potato cream but combined together it made a very light and luscious dish with every spoonful. Miss K mentioned that she particular liked the mountain spinach which she believes was poached in some sort of broth as it tasted great on its own, she also mentioned that the potato cream was very tasty and very smooth. 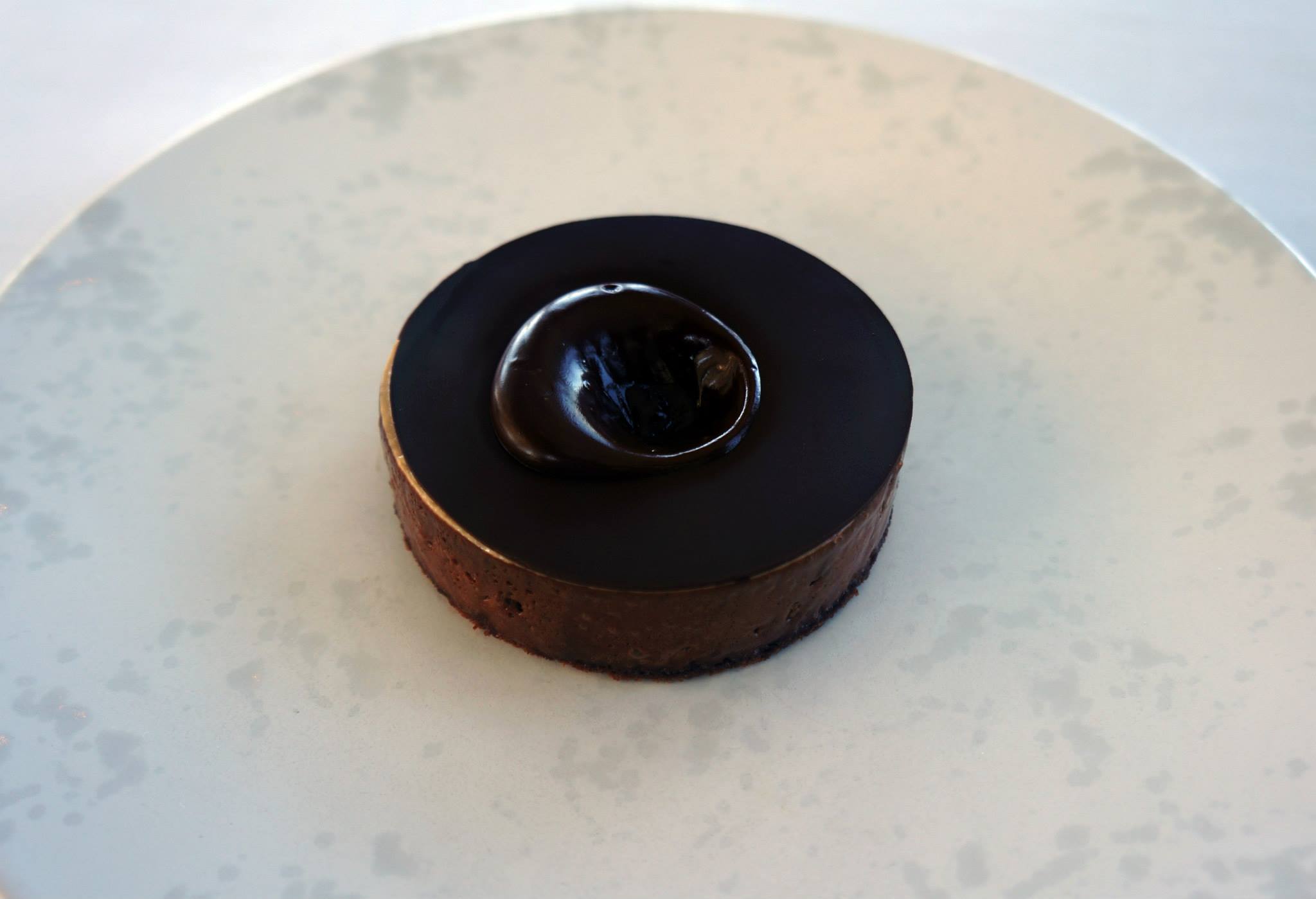 To finish our meal we decided that we were most certainly going to share our desserts as neither could sacrifice either of the desserts we were about to order. The dessert I started off with is one of the signature desserts that is the Eight texture chocolate cake, this dish is made with eight different kinds of chocolate placed on top of each other and presented by the waiter drizzling chocolate sauce into the center and letting the cake collapse in on itself to create a circular shape. The chocolate cake is delectable and is a multi-layered sensation of light chocolate tastes whilst not being overpoweringly sweet. 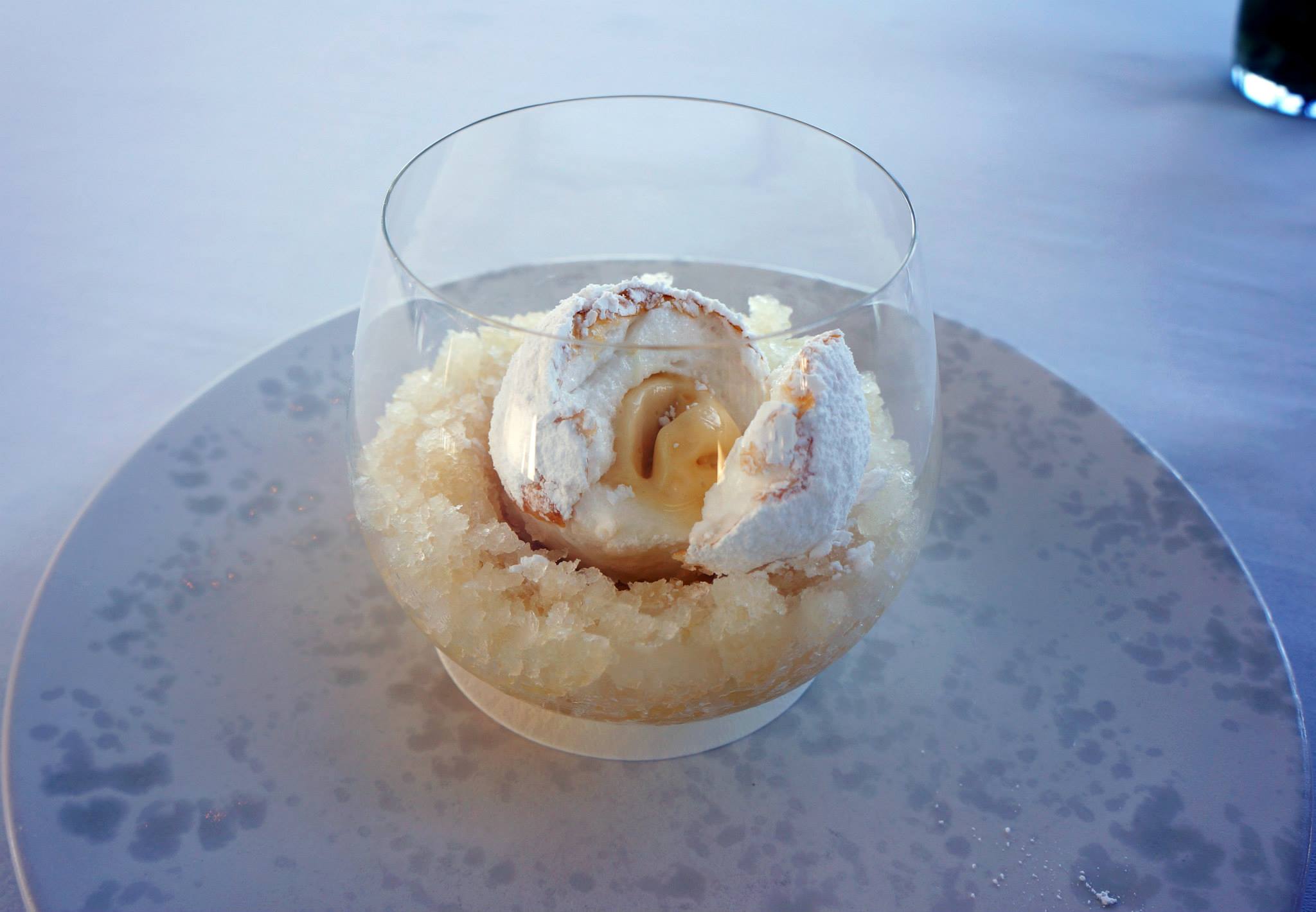 The dish that everyone has asked us about is the legendary Snow Egg. Quay rotates different variations of this dessert throughout the week and the Jackfruit snow egg was available when we dined, the original dish featured was the Guava snow egg but this doesn’t make it any less impressive. Those that don’t know the specifics behind the dish, it is basically a meringue ball filled with Jackfruit ice cream that is blow-torched with a sweet layer around it. The ball is served in a glass cup filled with a lightly flavoured fruit granita. I’m happy to say that the hype behind it is well deserved, it truly is one of the best desserts I’ve ever had and it’ll be quite difficult to ever top the perfect mix of ice and sweetness found in this dessert.

Overall I would definitely rate Quay up there as a legendary restaurant, the food is top notch and I couldn’t fault the service even if I tried hard to. The waiters were extremely friendly and helpful, always happy to stop for a chat with the diners and explain more about the dishes being served. I would love to come back some time in the future as the menu constantly evolves over time.