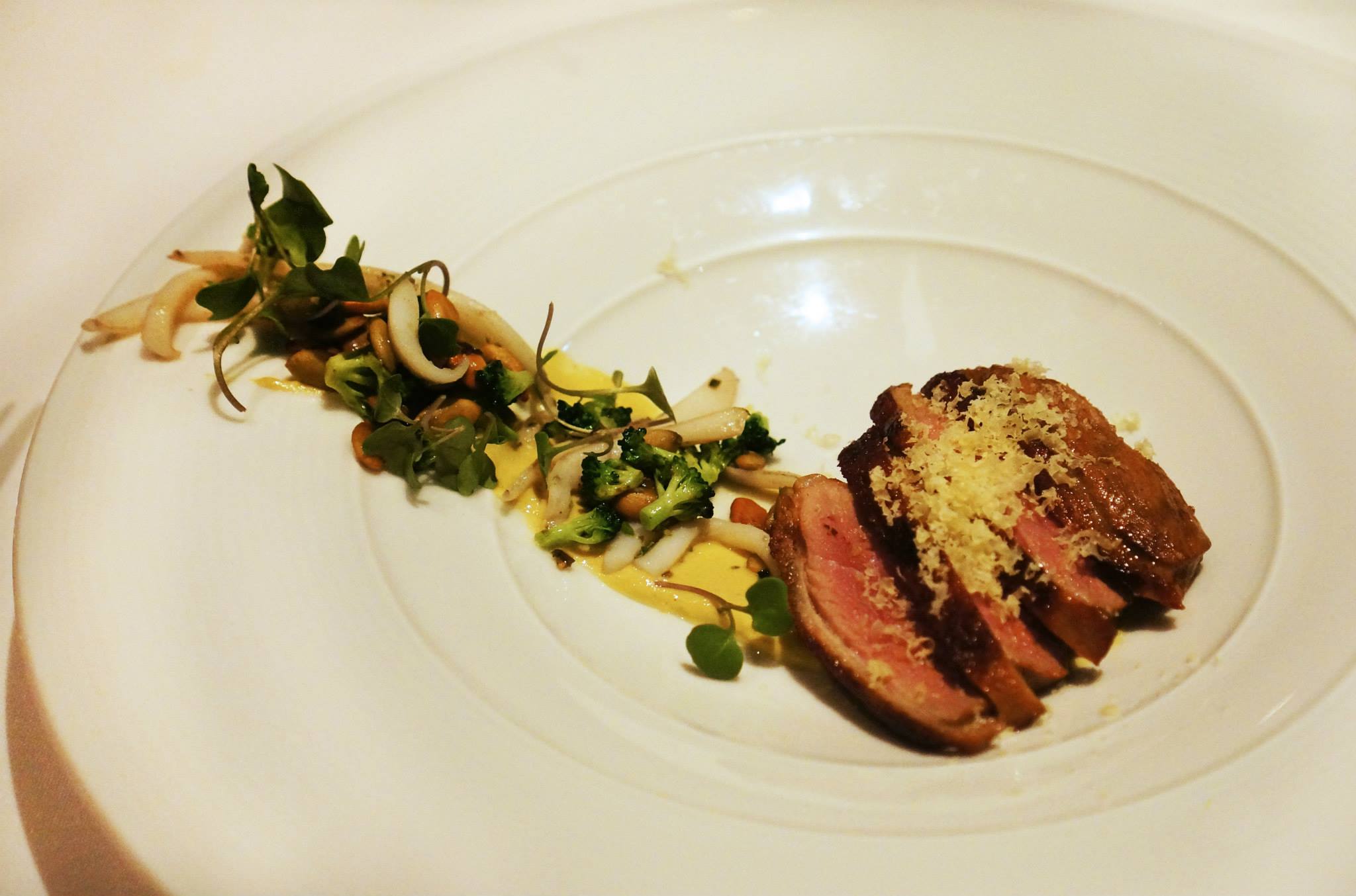 Mr C recently bought a Groupon deal for Foveaux Restaurant in Surry Hills which is a one chef hatted French restaurant that’s quite popular and has many good reviews. I was a bit skeptical to dine here as I had the impression that every French restaurant will serve escargot or foie gras as part of the meal which I’m not a fan of, but that should be okay as Mr C will be a gentlemen and them for me right? Well it turns out he actually wouldn’t but luckily there were neither of those in our dinner that night 🙂

As part of our groupon deal we got to pick two entrees and two mains, Mr C decided to go with the Smoked duck, broccoli, cuttlefish, duck cheese and umeboshi as his entree (above). This was the first dish to arrive and he was quite happy with the presentation and taste of the dish which had a very nice smokey flavour to it. The duck mixed interestingly well with the umeboshi fruits and cuttlefish which were scattered on the plate. 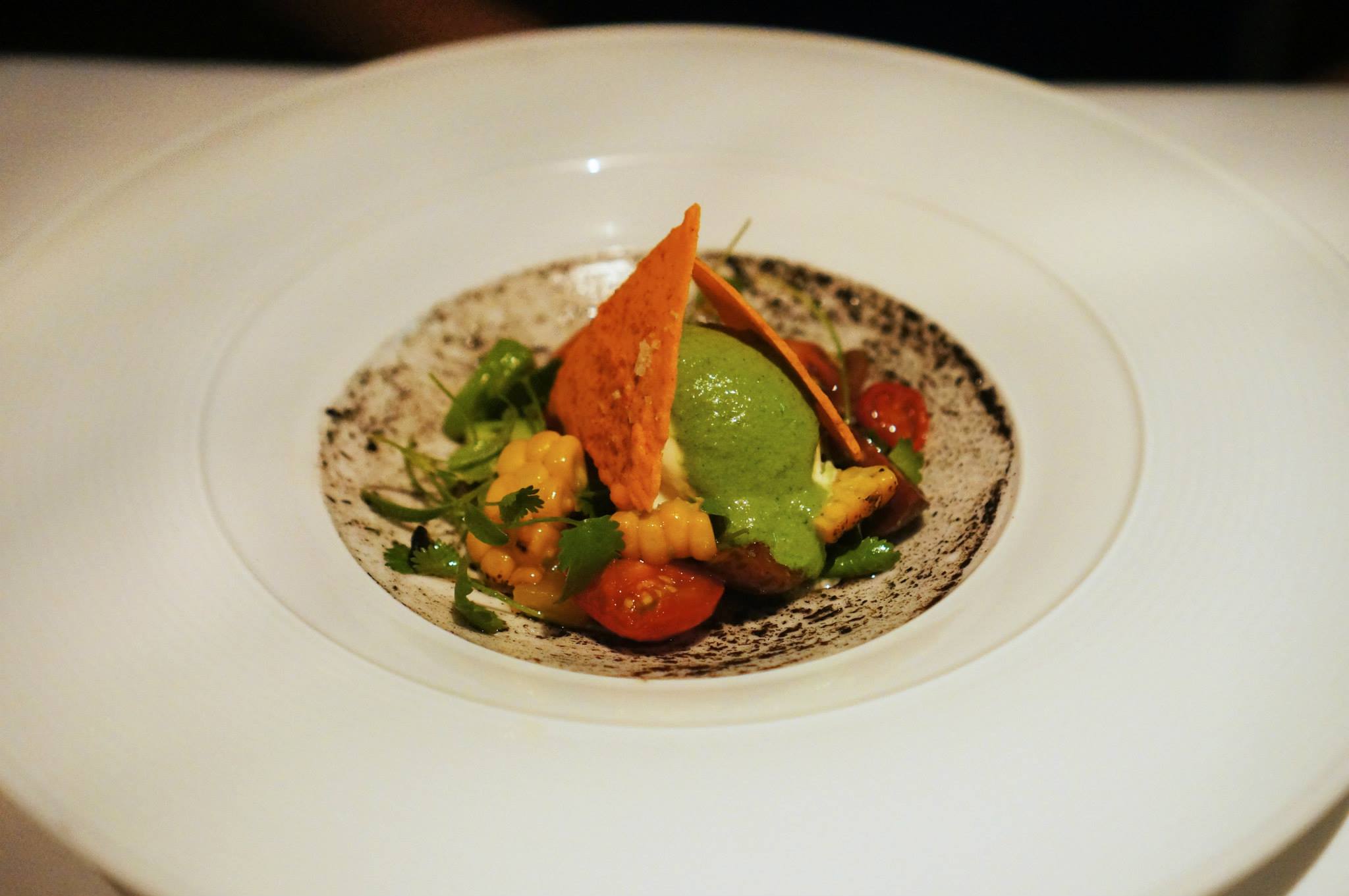 I was very excited to see my dish being served. The word sour cream ‘sorbet’ in the menu immediately captured my attention and I was so curious to see how it would turn out. I was amazed how nicely it was presented especially with the shadow-ish background effect (bean paste?) that made the dish stand out. When I saw the sour cream sorbet I wasn’t sure it would taste like normal sorbet ice cream, however when I had my first spoonful it was so remarkably icy and probably the best sorbet I have ever tasted. The texture was so amazing and was even better dipped with the nachos. It was very devastating to watch it melt though as it quickly dissolved after only a minute or two of sitting on the plate. 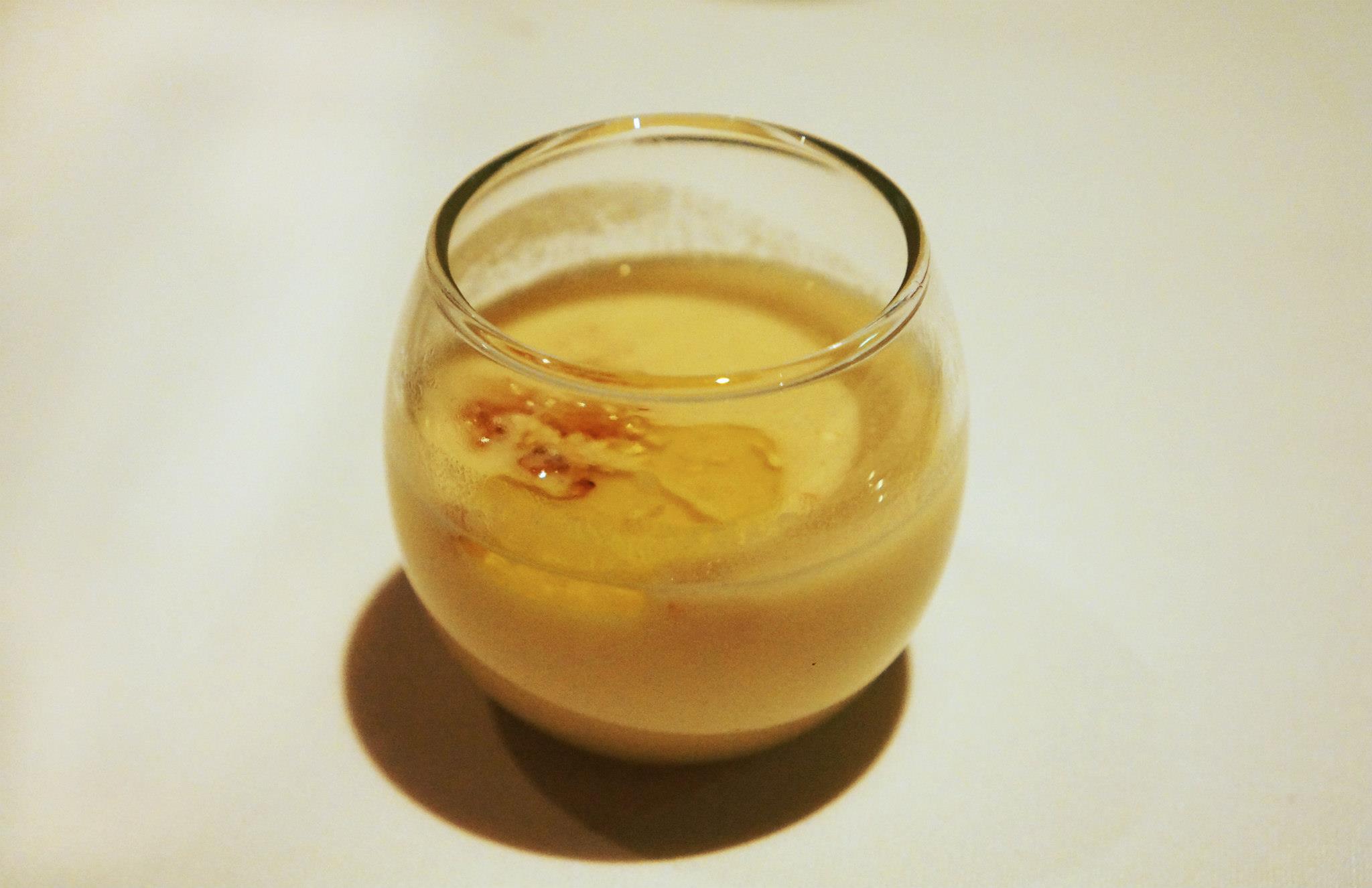 A complimentary starter which was simply perfect for a cold night that had me all warmed up and ready for the remaining food to be served. I thoroughly enjoyed this interesting chickpea soup, it had a strong truffle flavour to it as well as a creamy and rich texture. It was very cute to see it served in a candle-like jar, smaller than the size of your palm, if only other restaurants could invest more in interesting crockery. 🙂 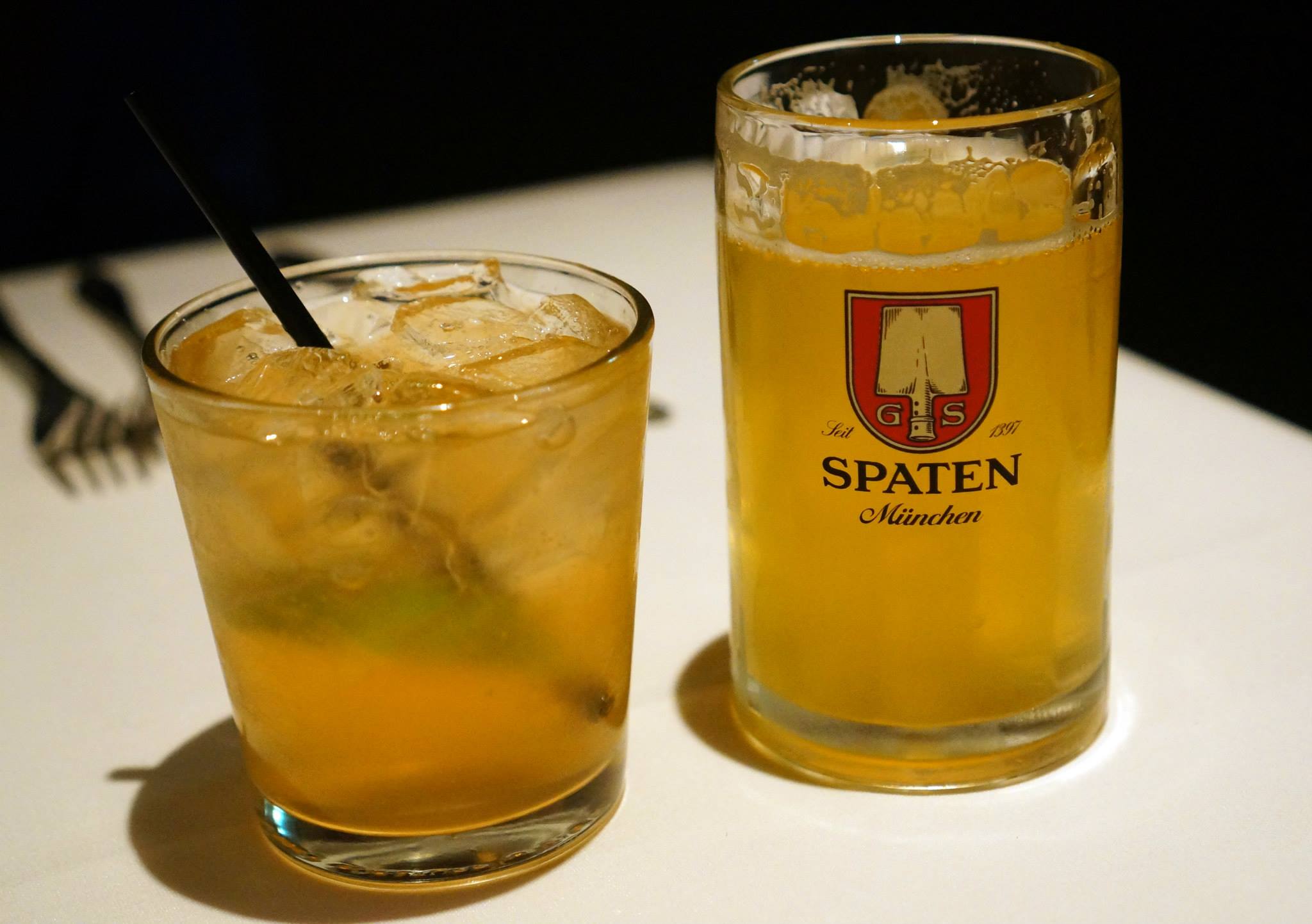 We ordered the usual lemon and lime bitters as well as a glass of beer for Mr C. It seems recently each time we get a lemon and lime bitter, it tastes better each time as well! The only downfall was that it was quite a small glass for $5 compared to other restaurants such Pancakes on the Rocks for $2.50 from the top of my head. Mr C happened to see a German beer on the menu so he went straight for that for his meal, he’s always been a bit of a fan for German wheat beers and definitely enjoyed this one 🙂 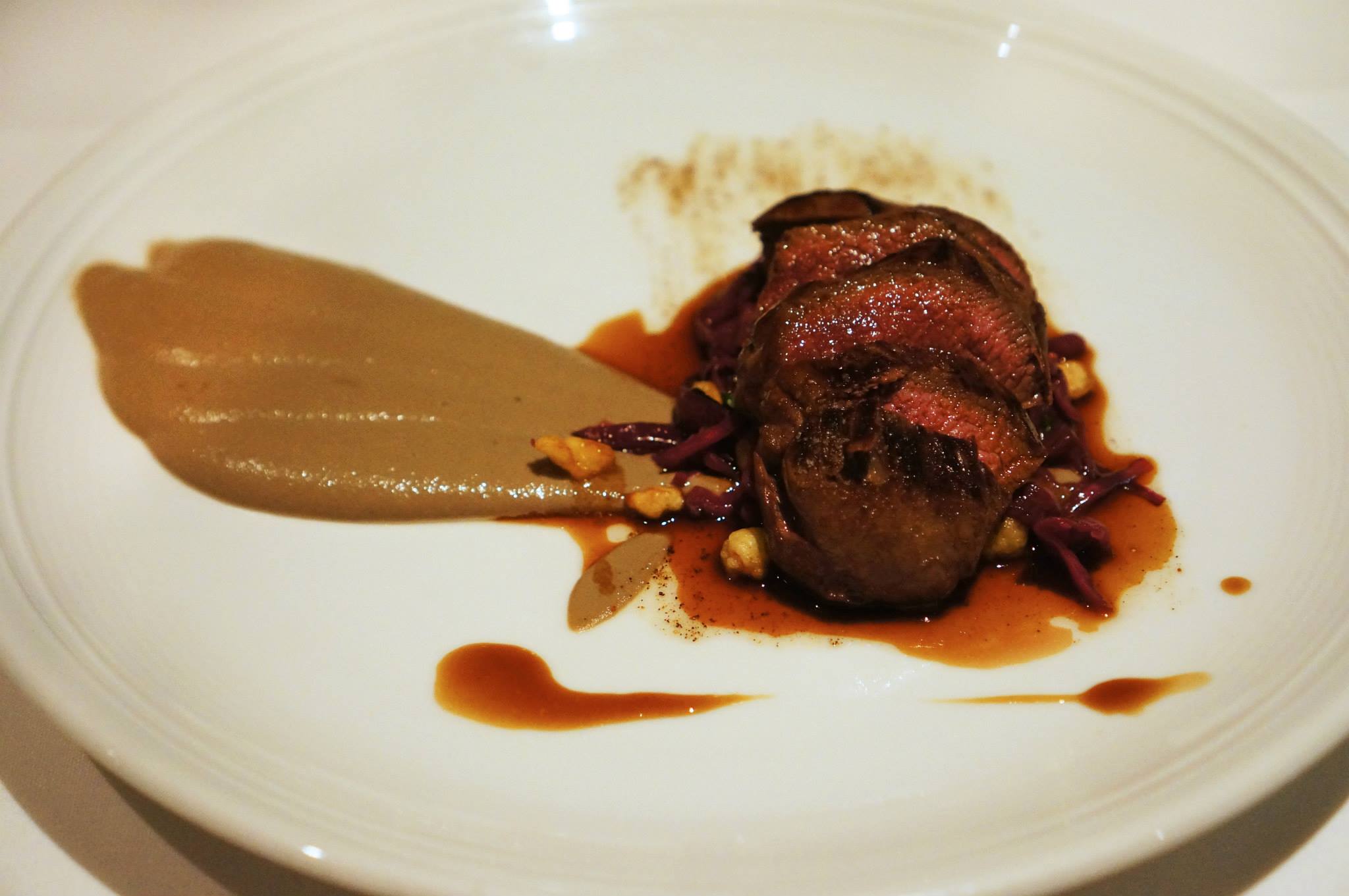 Mr C’s main course of the night was the venison with mushroom puree. The venison was cooked superbly medium rare with a smokey and sweet taste to it. I personally enjoyed it without the mushroom puree as it had the sufficient flavours to it already and the puree had a slightly off putting earthy smell to it which didn’t smell as good as you might imagine it to have. It wasn’t until a week or so after this meal that I found out venison is actually deer, I had a mind blank on the night and just assumed it was veal for some reason – now I feel horrible for even tasting it because deer are so cute 🙁 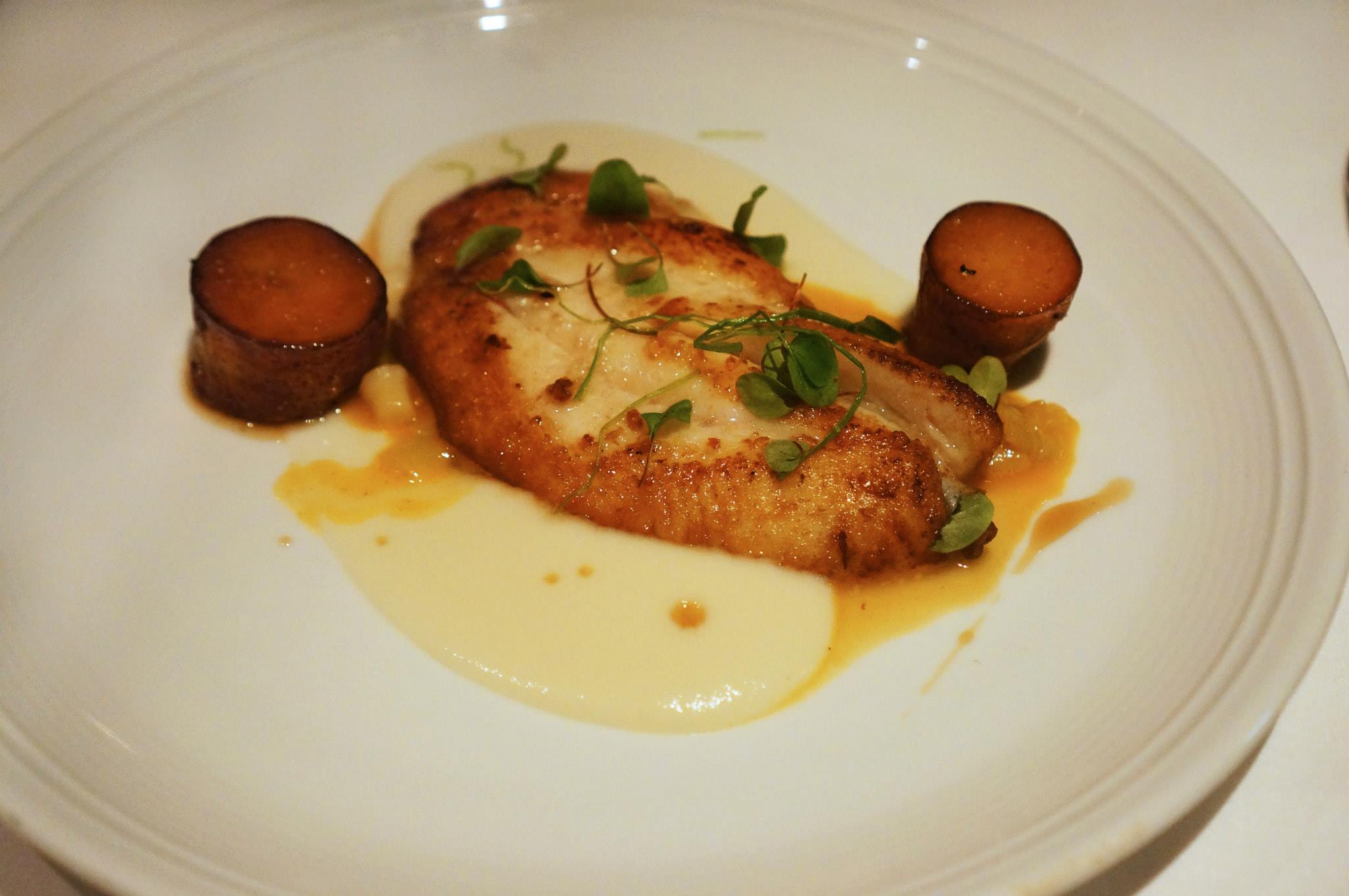 My main ended up being a fish dish as usual because I’ve always been a big fan of seafood. The best looking main on the menu was the Silver Dory because it had an interesting set of ingredients such as the fondant potatoes and kohlrabi puree which seemed quite similar to cauliflower. This ended up being quite a nice dish, the best part was fixing the soft fish with the puree to create a creamy mix of delicious fish and flavours.

I’m glad we ended up visiting Foveaux because the food was excellent and I ended up having quite a good meal despite the fact that I wasn’t sure if I would enjoy French cuisine at the start. Luckily the menu seems to be a fusion of Modern Australian as well so the dishes are much more palatable and more to my liking. Keep an eye out for future group buy deals because it seems Foveaux is always popping up on those sites and they offer quite a good deal – the cost of our dinner was about $70 for two which was very good value.