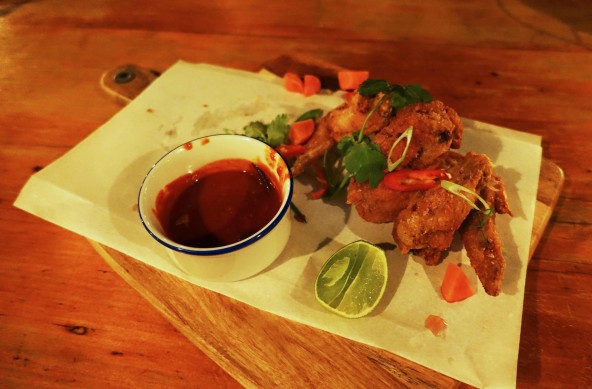 Hungry Wolf is a great little eatery located down south in Wollongong, it’s the sister venue of the hip and trendy Howlin’ Wolf whiskey bar which is right next door. I had the pleasure of visiting both a few weeks prior to check out the new food menu for the newly opened Hungry Wolf.

There are two options of chicken wings served at Hungry Wolf, one is the Korean spicy variety and the other is the traditional American style. Chicken wings are generally very hard to get wrong and they’re absolutely delicious, albeit a little messy and sticky because of the chilli sauce. 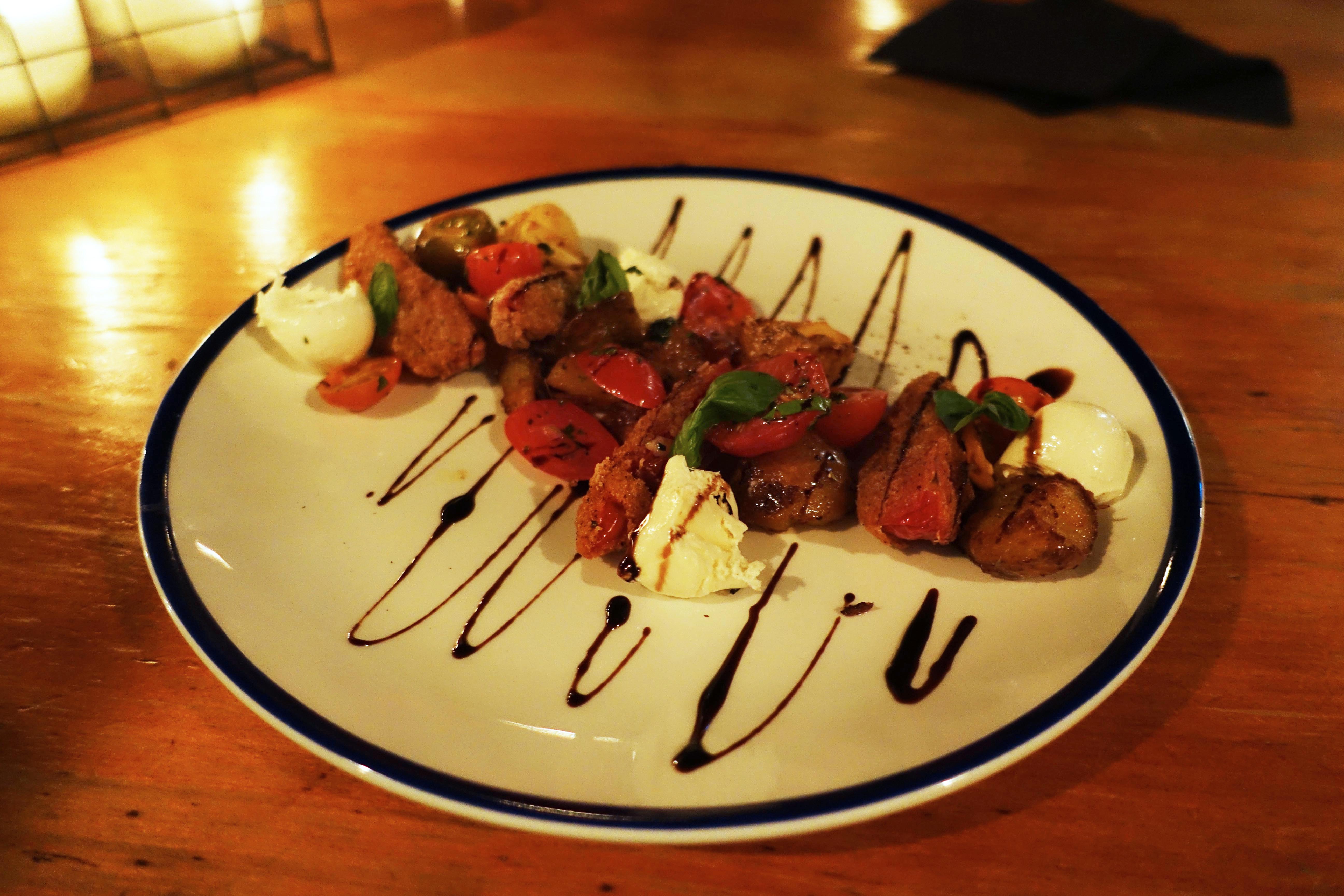 I was actually very pleasantly suprised to see that the food at Hungry Wolf defies the stereotype of bars not being able to serve great food. The fried heirloom tomatoes was a great example of high quality ingredients, the mozarella was flavoursome and the fresh cherry tomatoes were delicious. 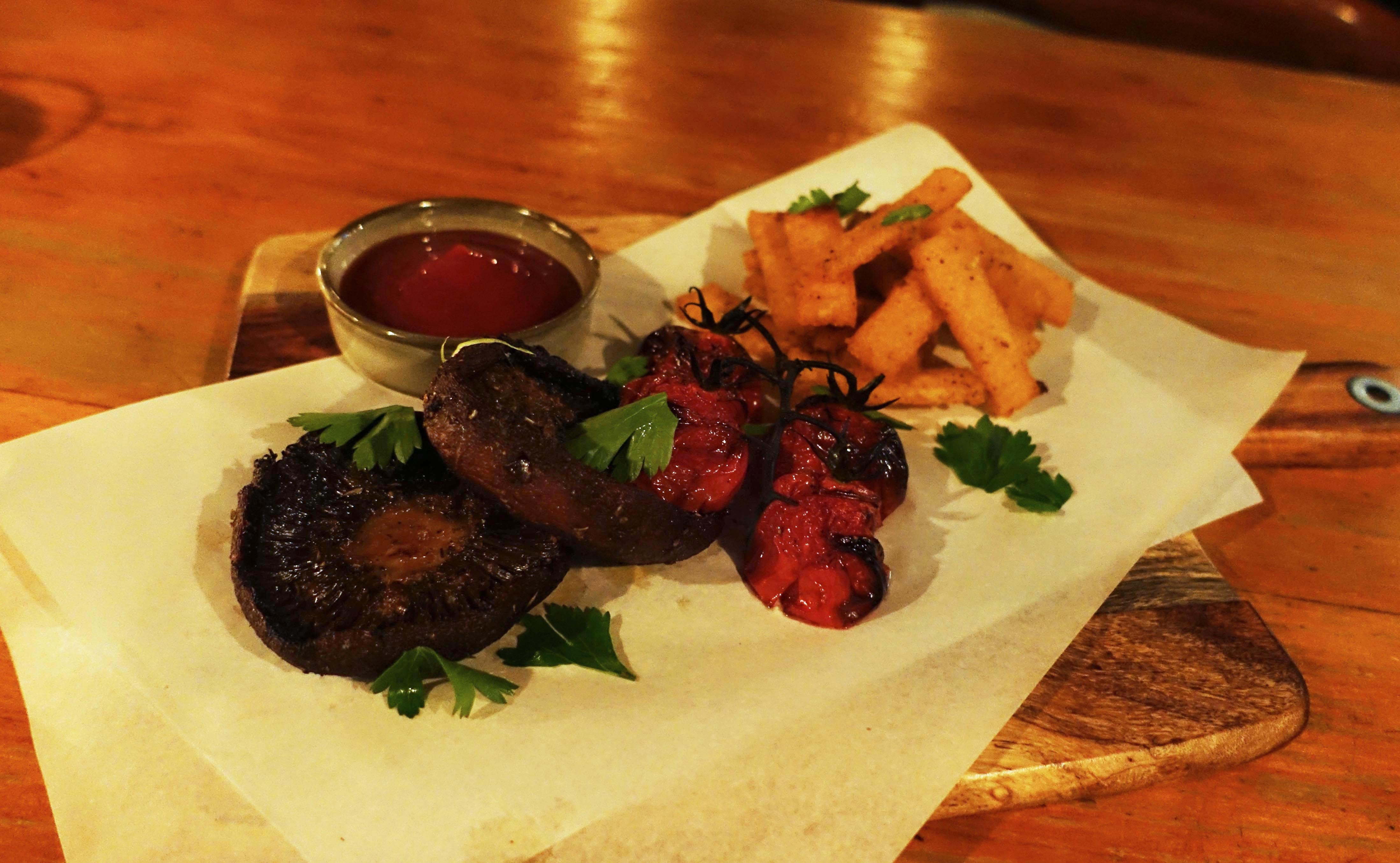 I always love a great mushroom so I was happy to see this arrive, the polenta was also quite nice and again I enjoyed a few morsels of cherry tomato served still on the vine. 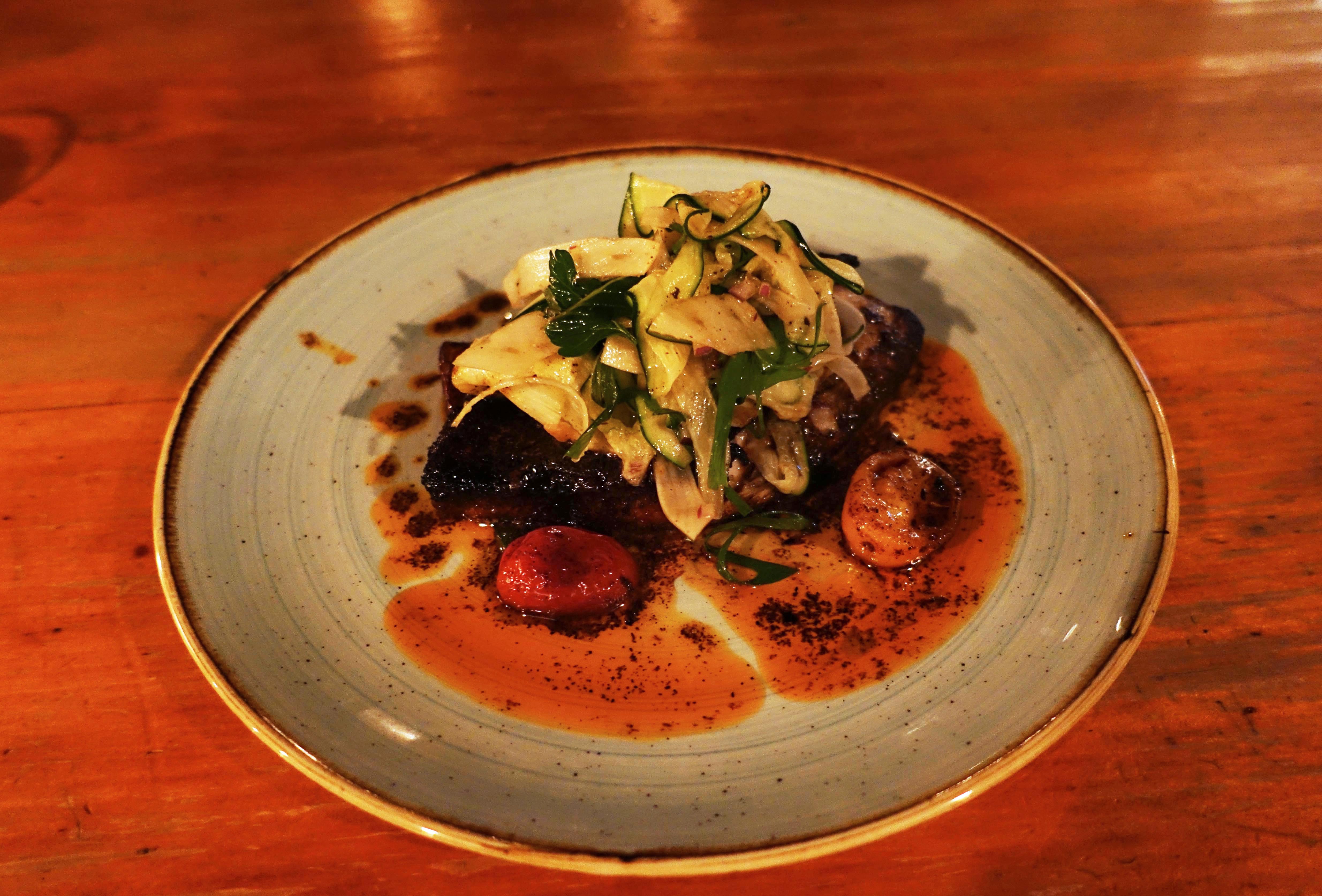 They definitely weren’t kidding when they named this dish blackened fish. Zucchini is one of my favourite vegetables and I always love a dish which uses it as the base green to accompany meats.

When I saw this arrive there was no doubt in mind that I would enjoy it, the pork belly was flavoursome and very tender and the crunchy crackling was absolutely divine. 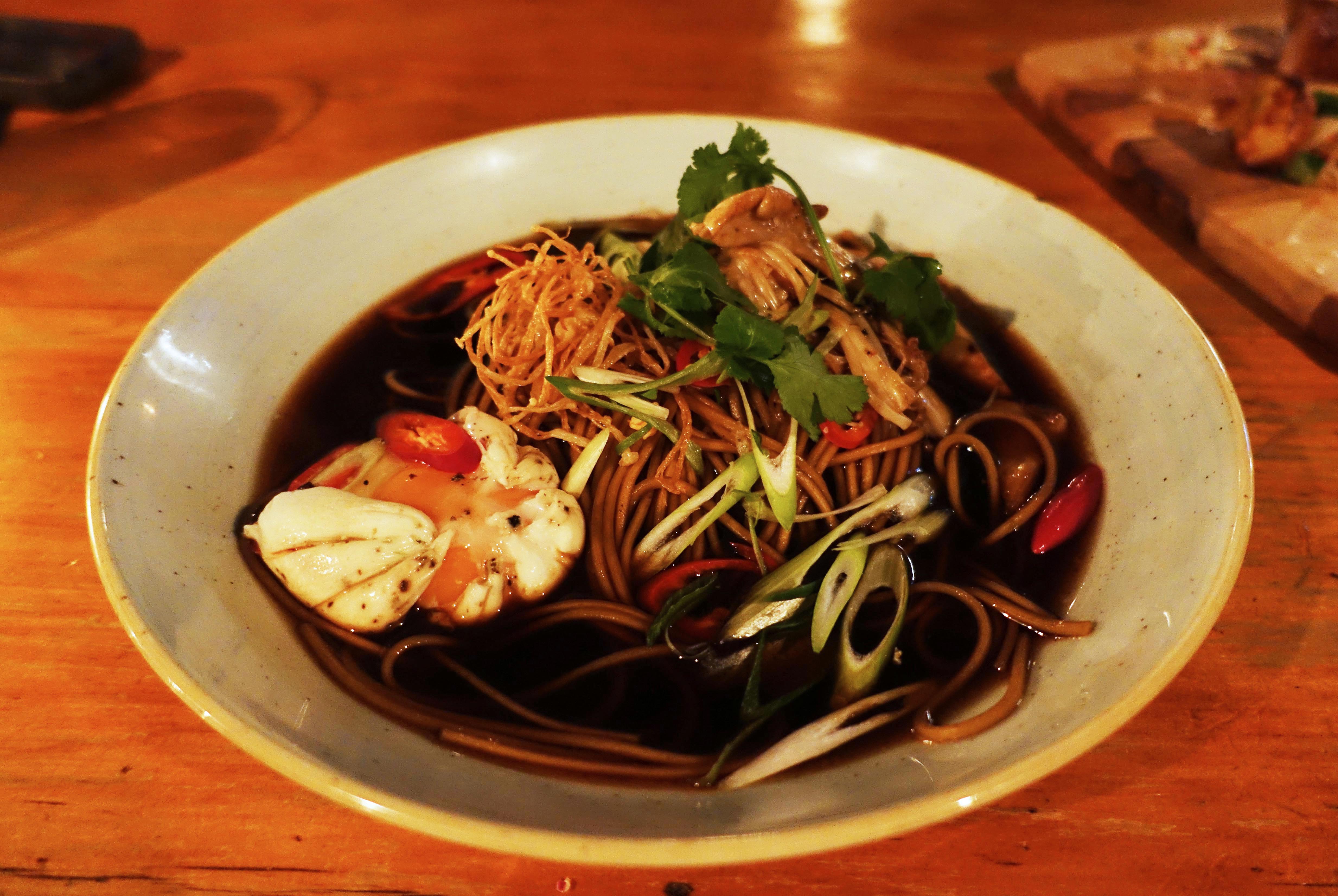 If I had to pick a dish I didn’t quite enjoy it would be the house ramen, I thought it was a little odd being on the menu and didn’t really fit in with everything else. That being said it wasn’t necessarily bad but it also wasn’t exactly ‘ramen’ in the traditional sense either 😉 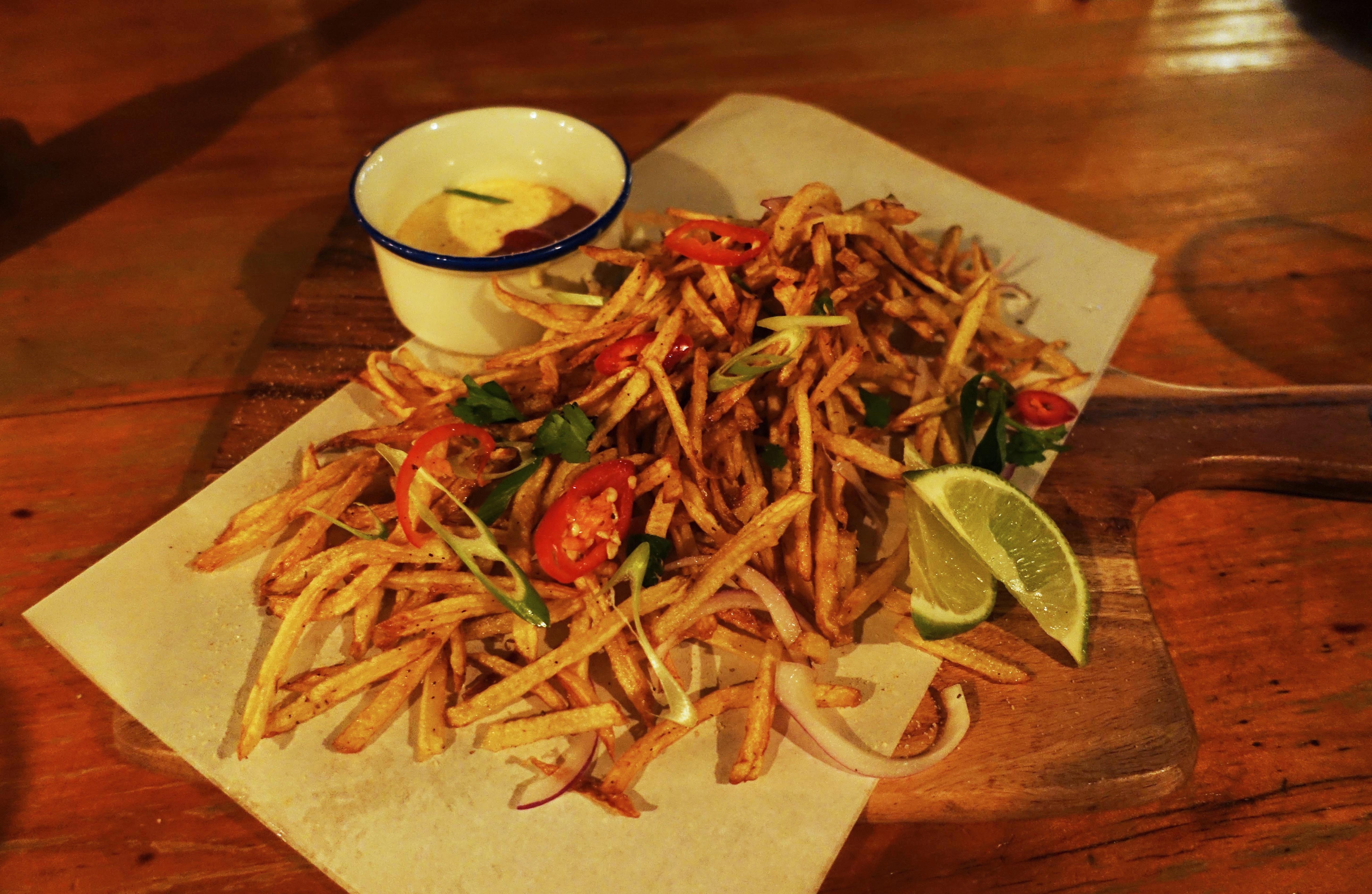 The fries served at Hungry Wolf are cut very thin and served with a delicious aioli and lime. So good. 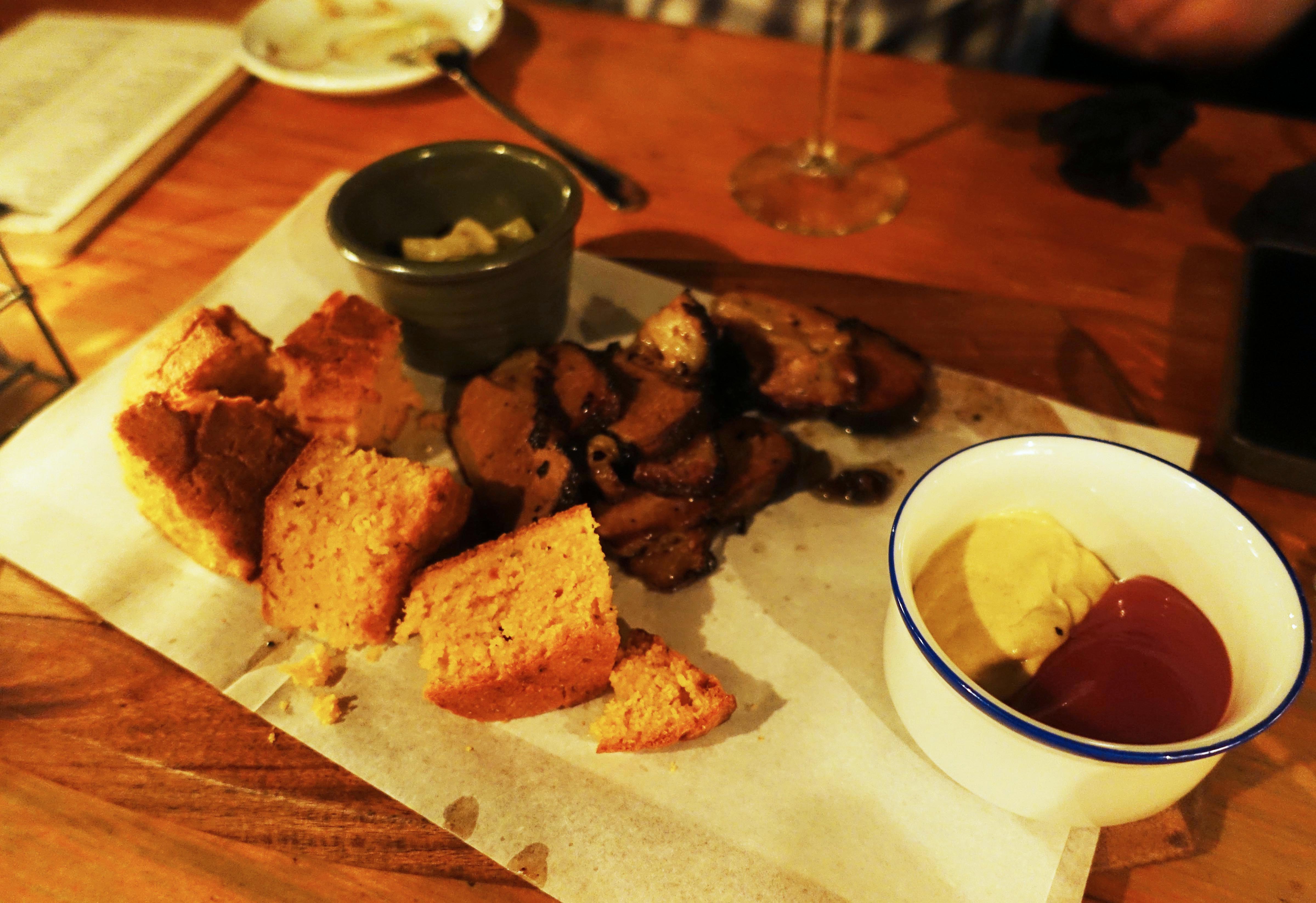 Oddly enough I’d never had cornbread before but I found it to be far too filling especially after having so many other dishes. The beef brisket on the other hand was absolutely delicious and very tender. 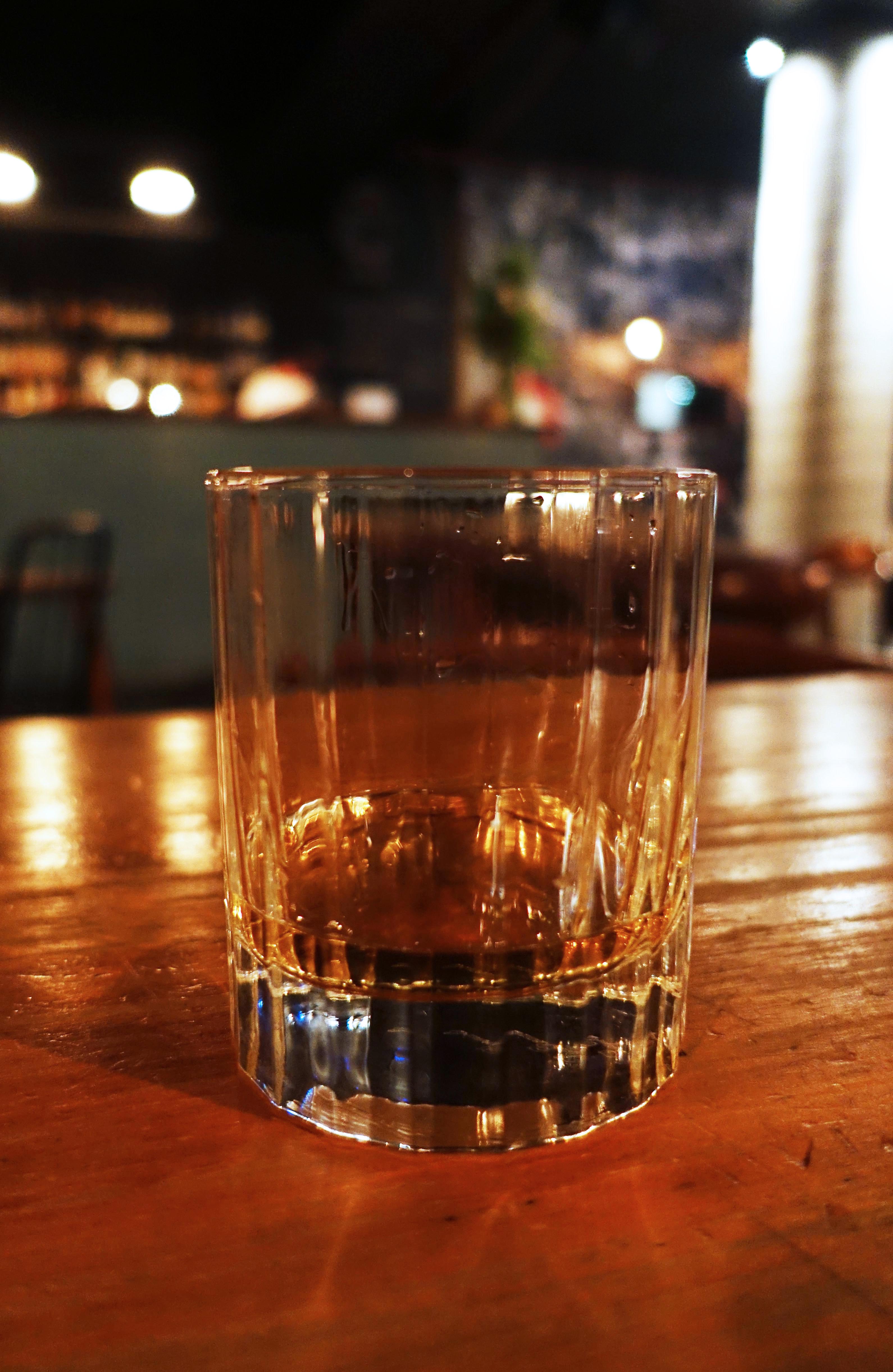 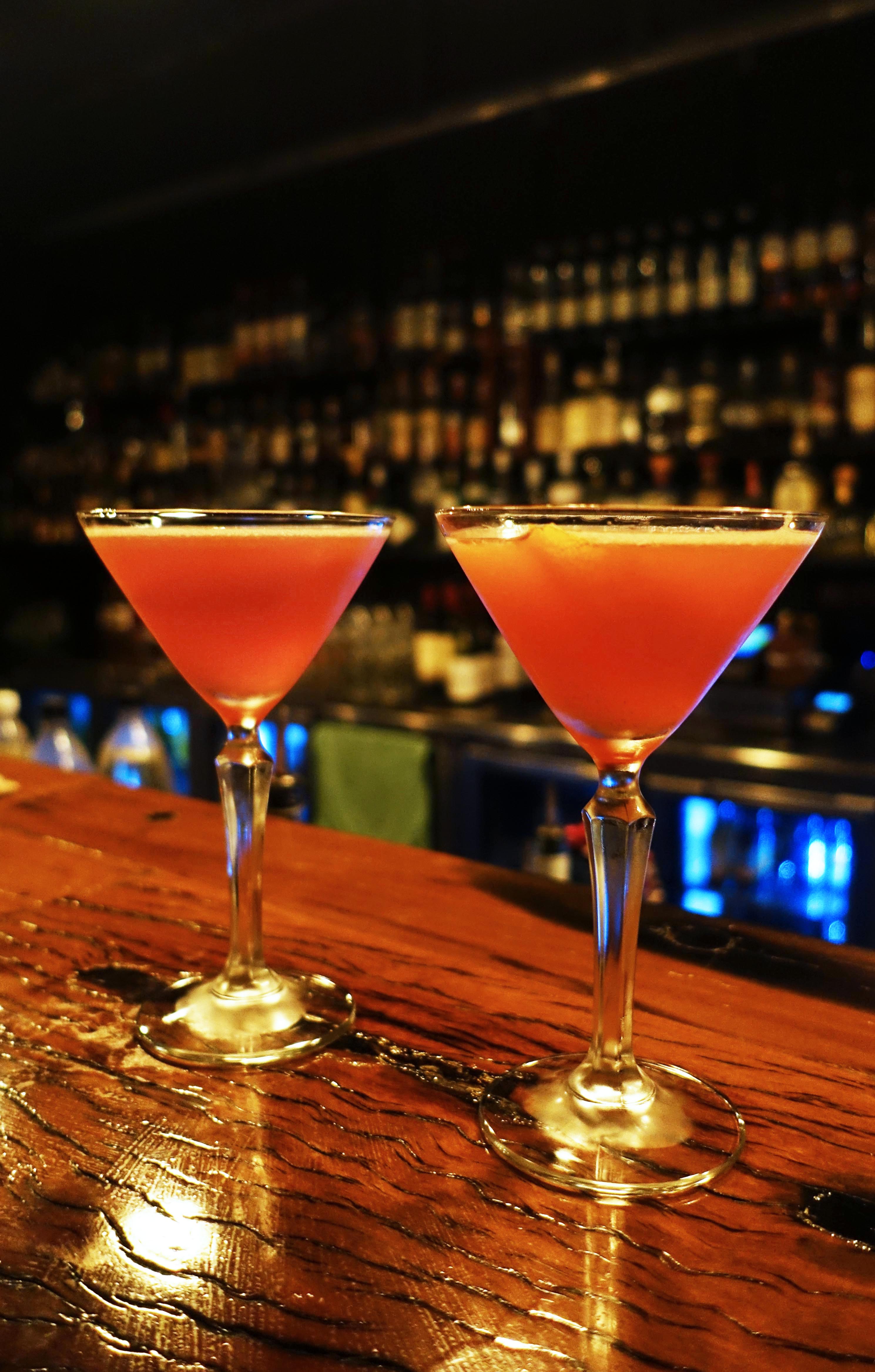 Since the event was being held within Howlin’ Wolf it was a given that the drinks would be flowing. Howlin’ Wolf specialises in whiskey and there is a whole page full of different whiskeys available to pick from, it’s actually very impressive and certainly not something I was expect from such a small venue in Wollongong.

The cocktails available on the menu are also really quite good and the ones I managed to try were a mix of some being based on gin and others on whiskey. 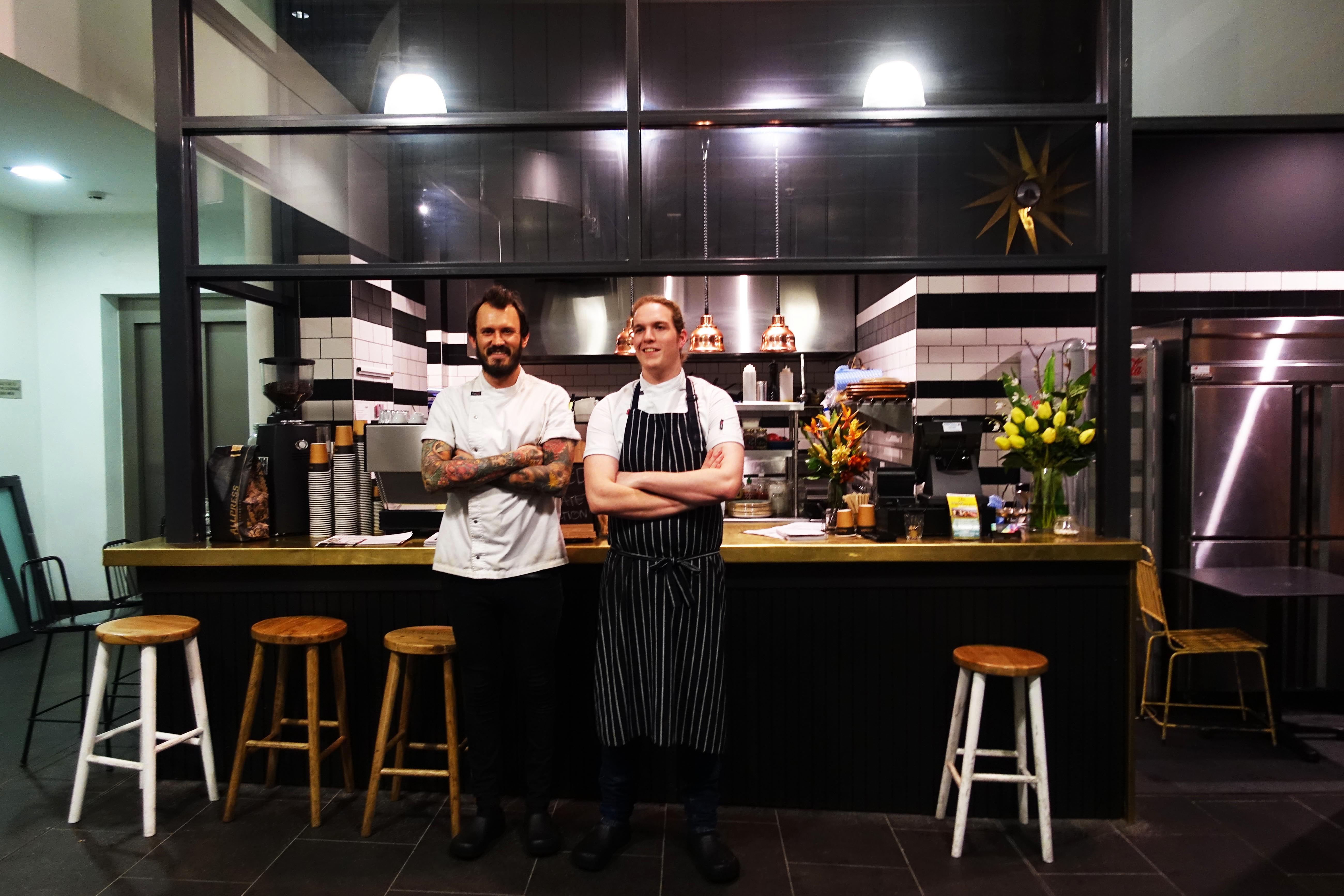 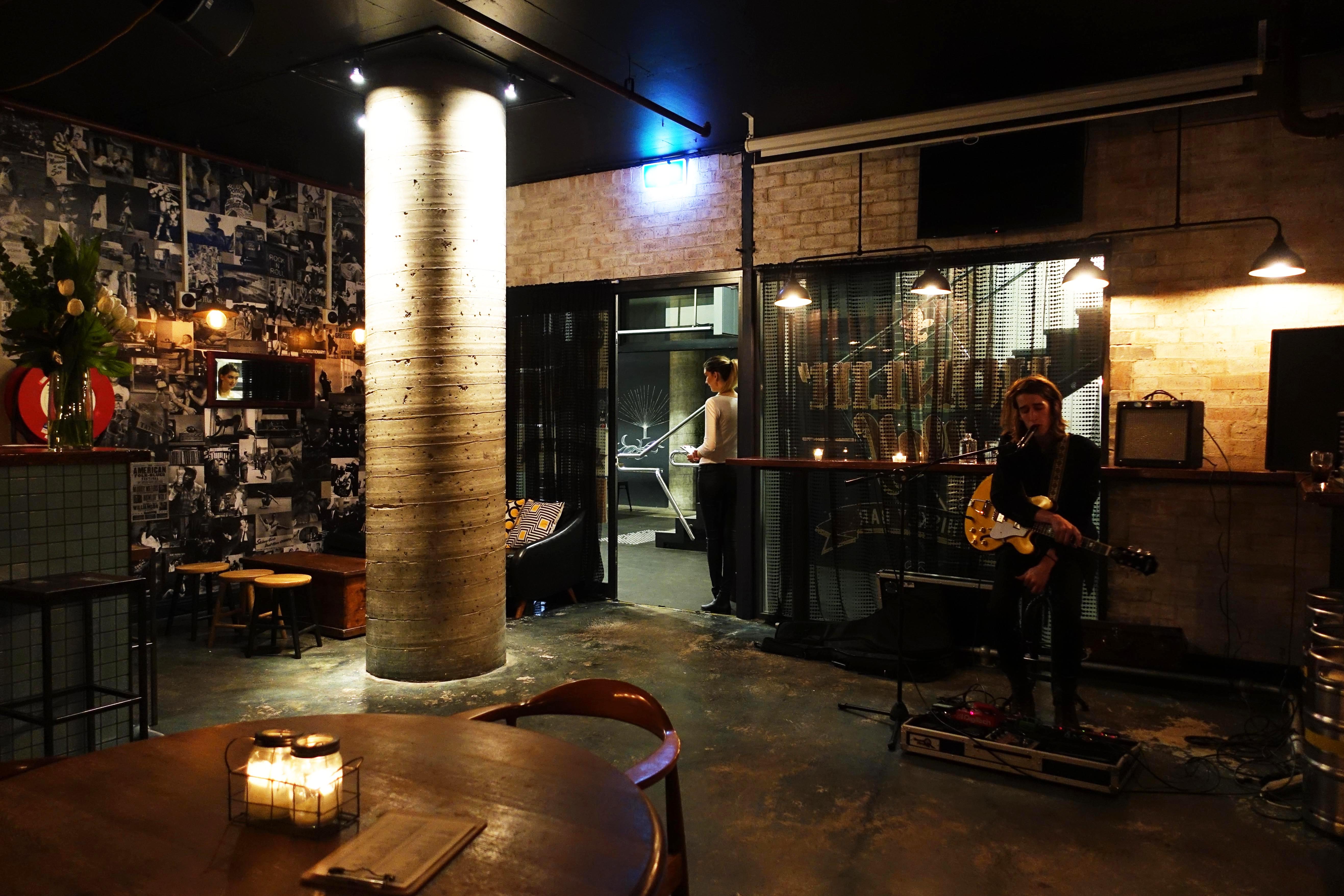 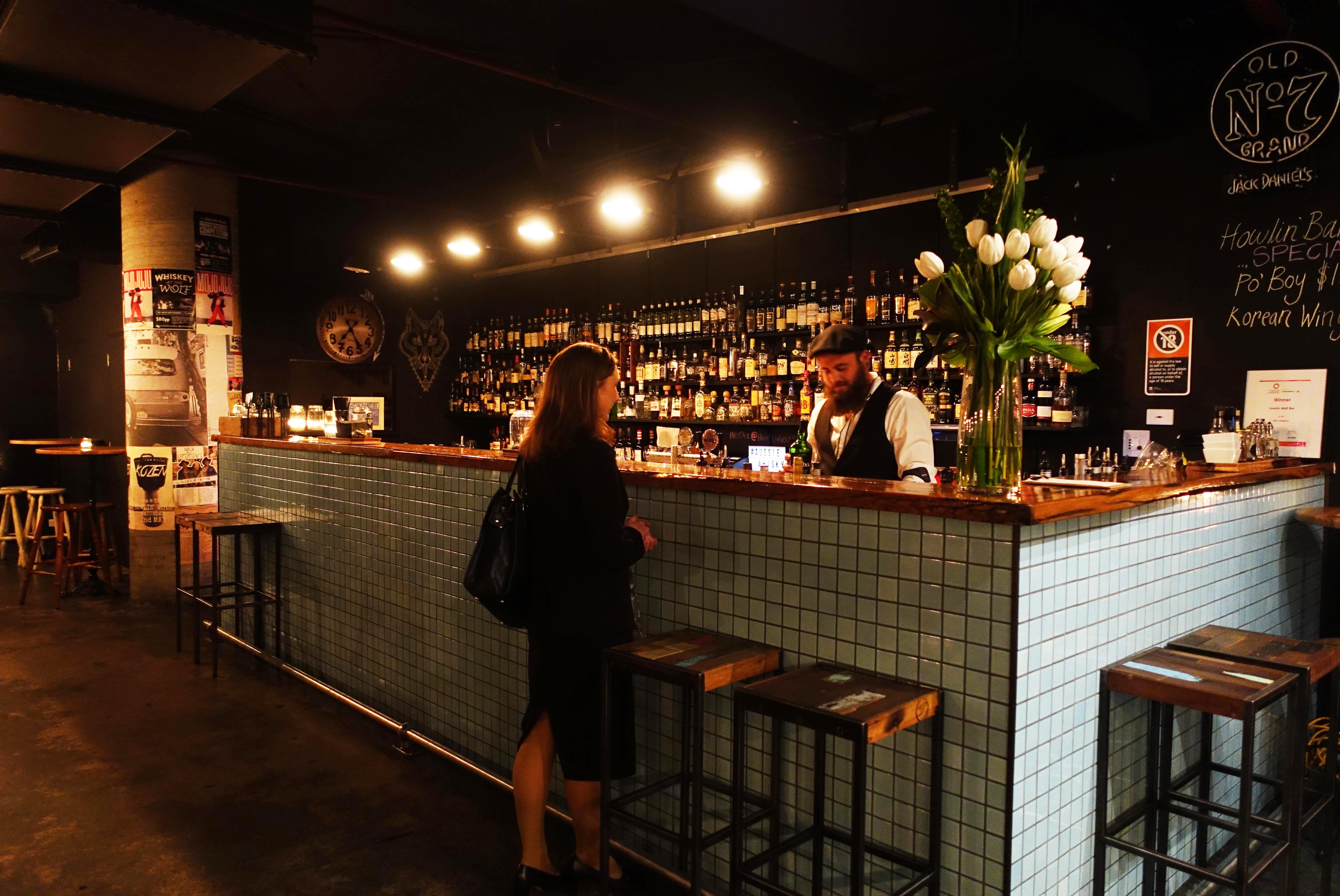 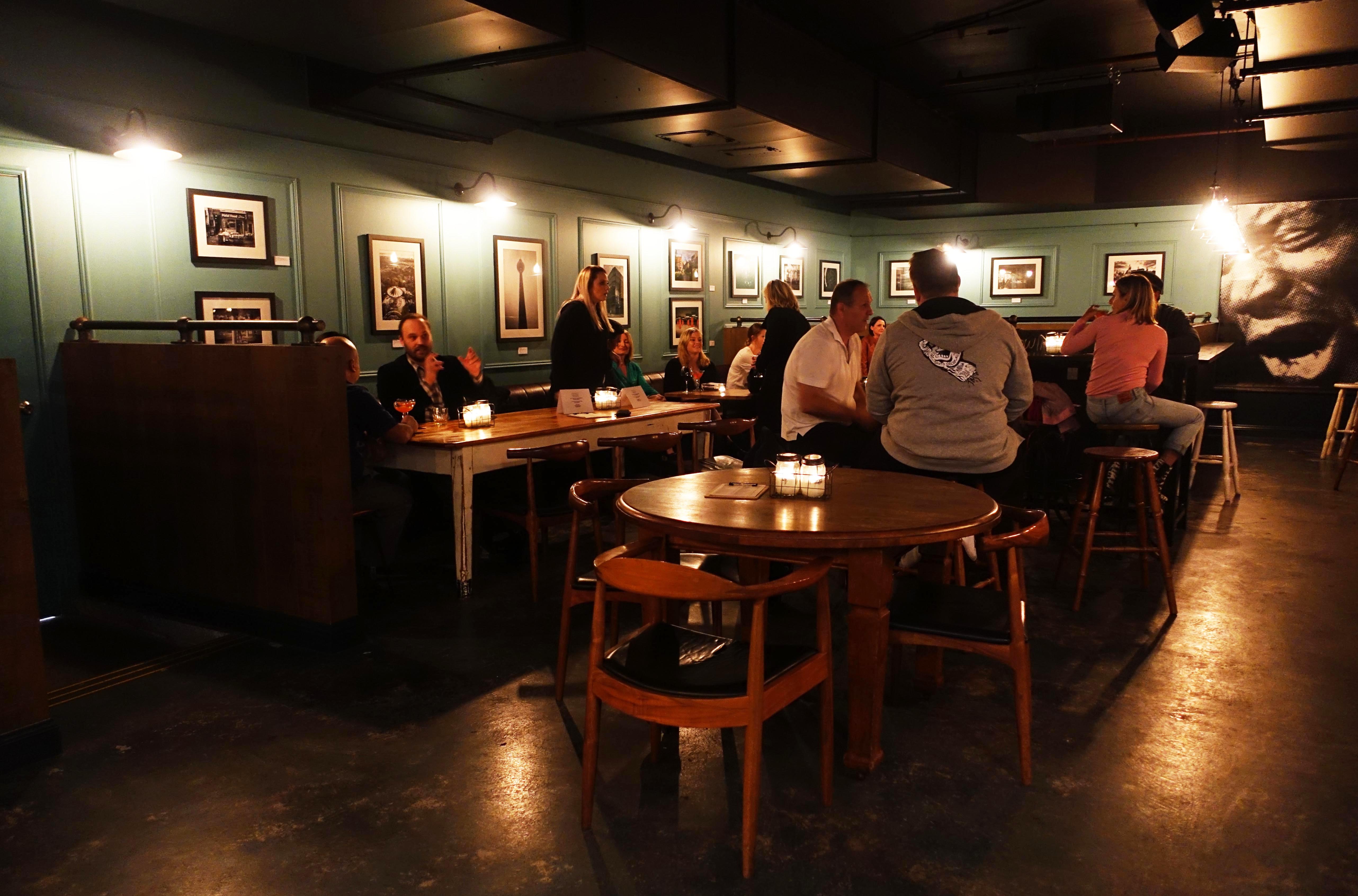 The Hungry Wolf kitchen is located literally opposite Howlin’ Wolf and during normal trading hours is surrounded by tables and chairs, I was very impressed at how much good food could be produced from such a comparatively small kitchen. Howlin’ Wolf on the other hand is a full fledged bar with a good amount of space (including booths) and also an area for live music.

The Food Diary dined as guests of Wasamedia & Hungry Wolf.