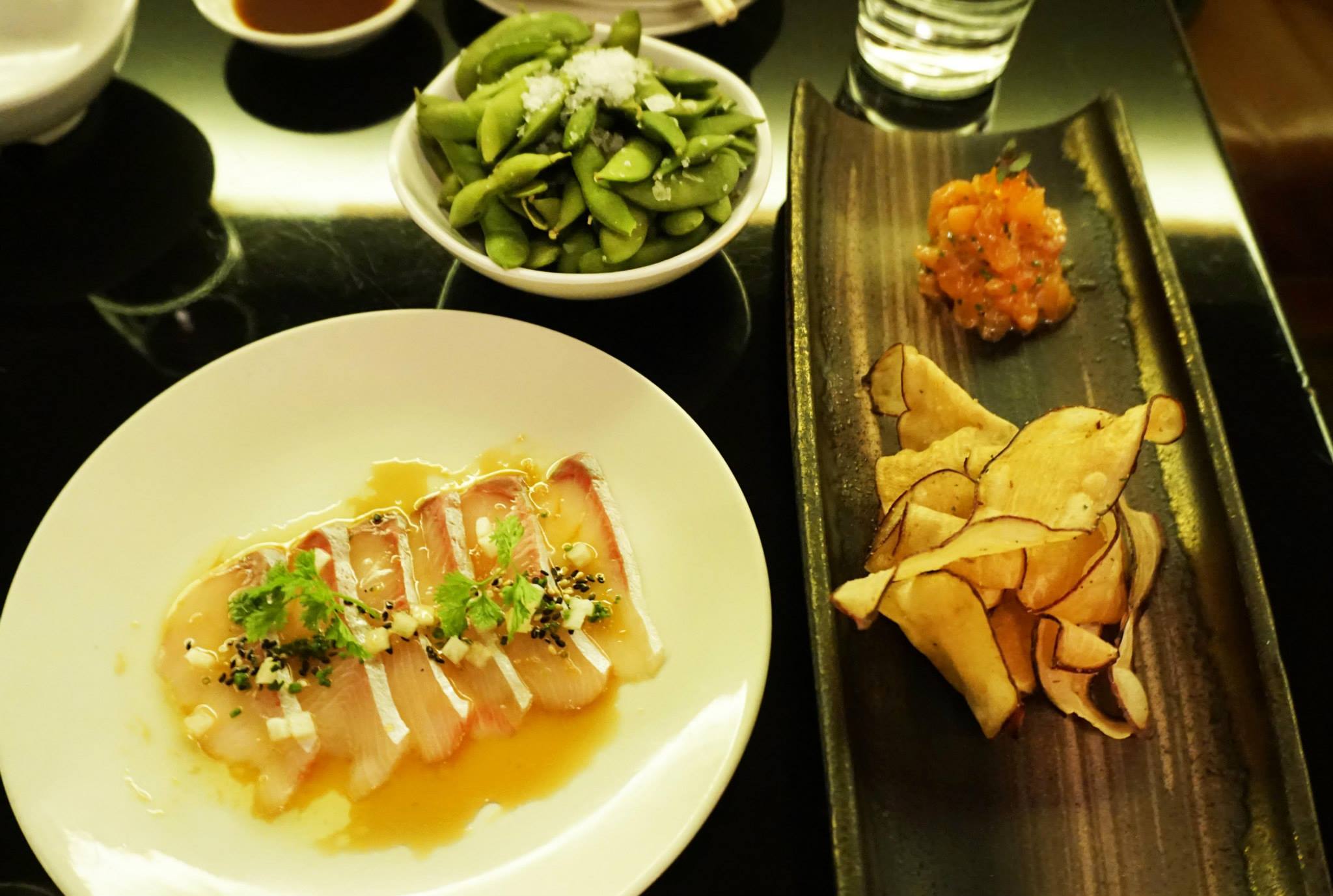 A few weeks ago we had dinner at Tokonoma Lounge which is the relaxed version of the very popular Toko Restaurant which we also visited recently. The two restaurants share a common kitchen and menu so the dishes are exactly the same, the only difference it seems is that Tokonoma has more lounge style seating (there is one VERY big lounge seat, pic below) and a casual atmosphere with more relaxed music.

First to arrive were the edamame. I’m personally not a big fan of these because I have to get through the soy beans before I get to the edible part which tastes a little bland, Mr C loves them though and wouldn’t stop eating them. My favourite was easily the sliced kingfish because I’m a big fan of the citrus taste of yuzu and ponzu dressing, the salmon tartare was also really fresh and comes with a hint of wasabi. 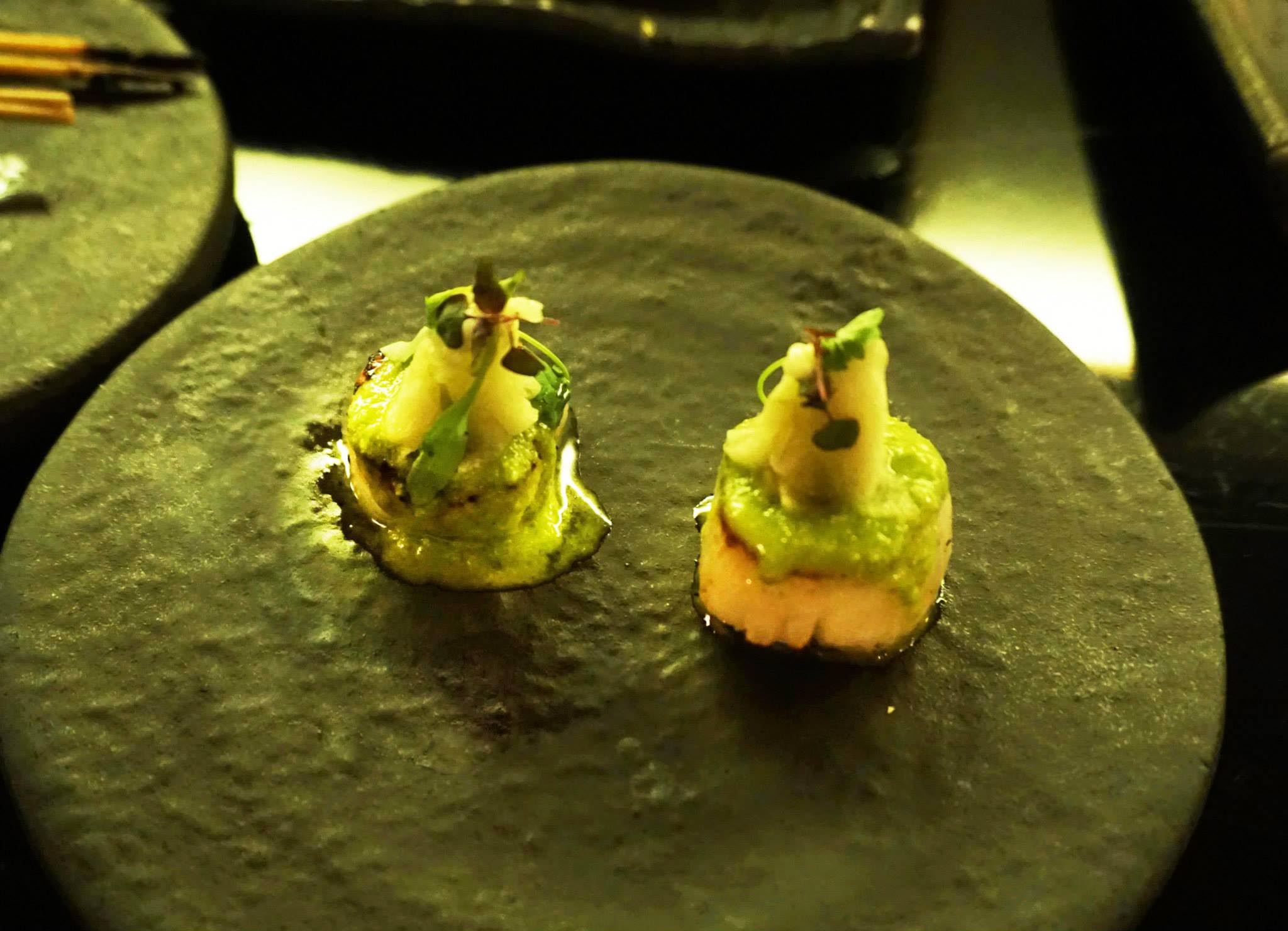 Hooray for scallops, there always seems to be a different way to serve these and Toko has easily topped the list for most interesting! The jalapeno and garlic sauce gives it a very distinct spicy yet slightly sweet flavour which is something that struck me as quite memorable. 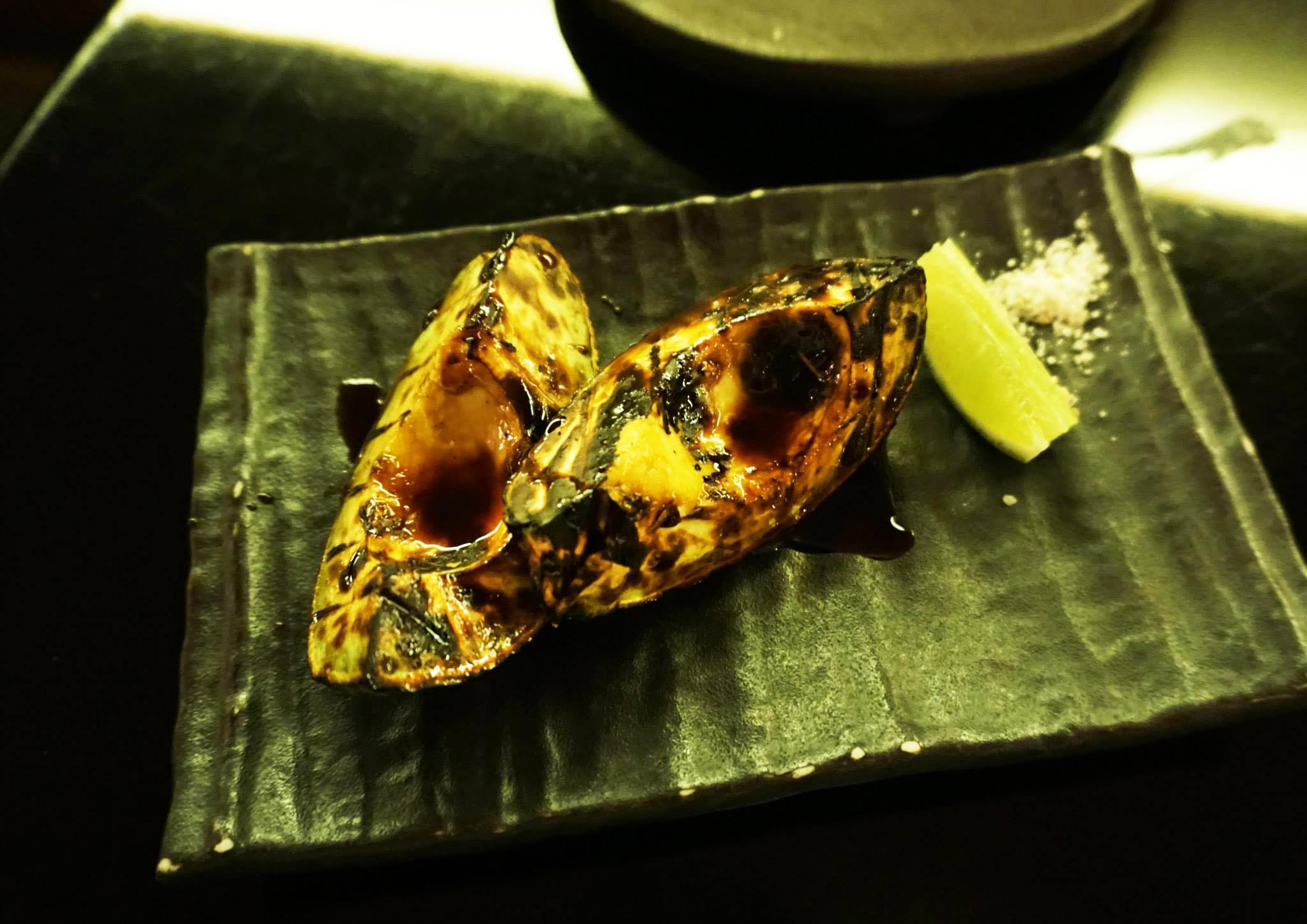 I don’t think I’ve ever heard of grilled avocado before but having tried it now, it’s something I want to try and make for myself! It did have quite an odd texture at first but a touch of lime makes it a seriously delicious piece of avocado, the best part was the char grilled taste which I’ve never associated with avocado until now. 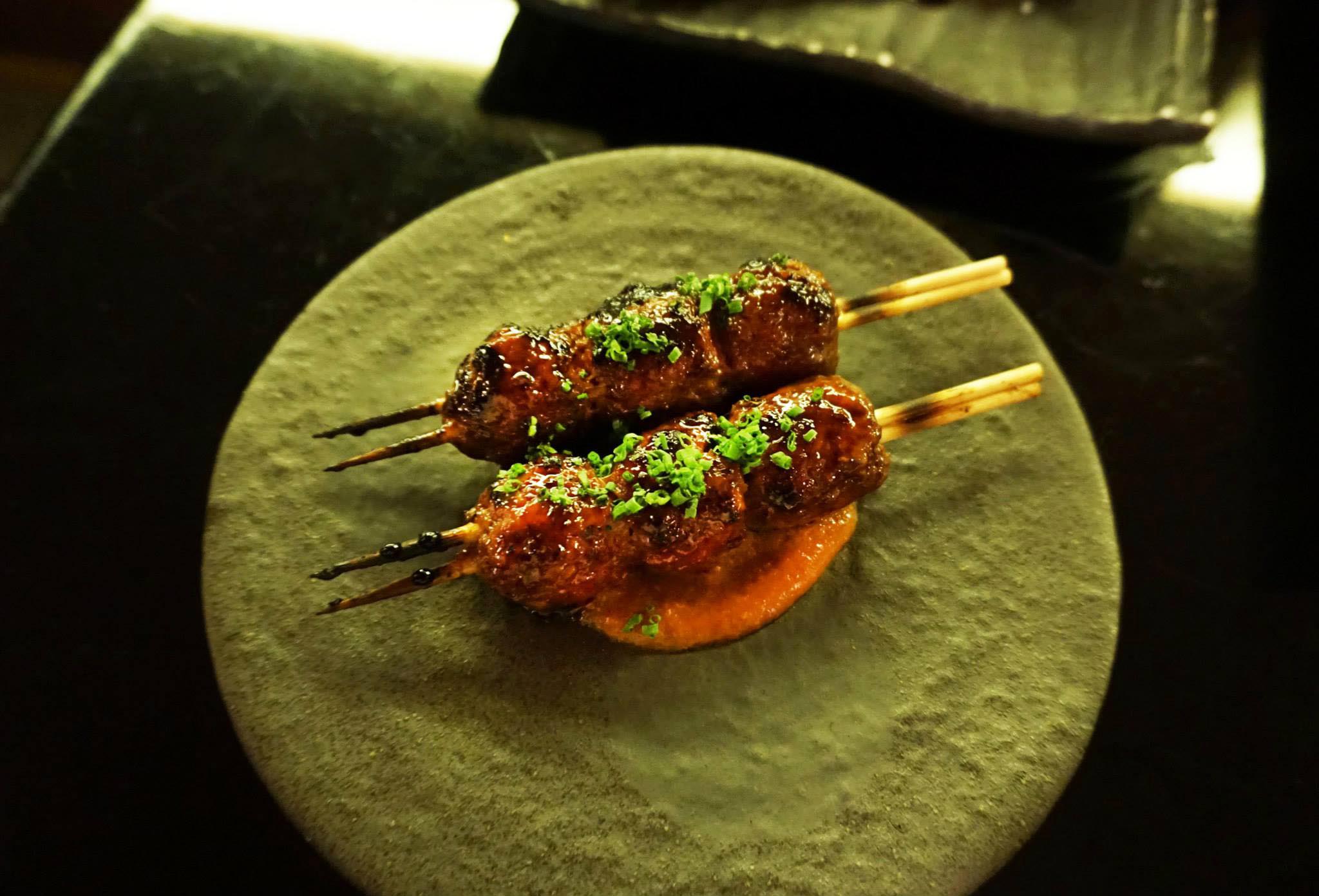 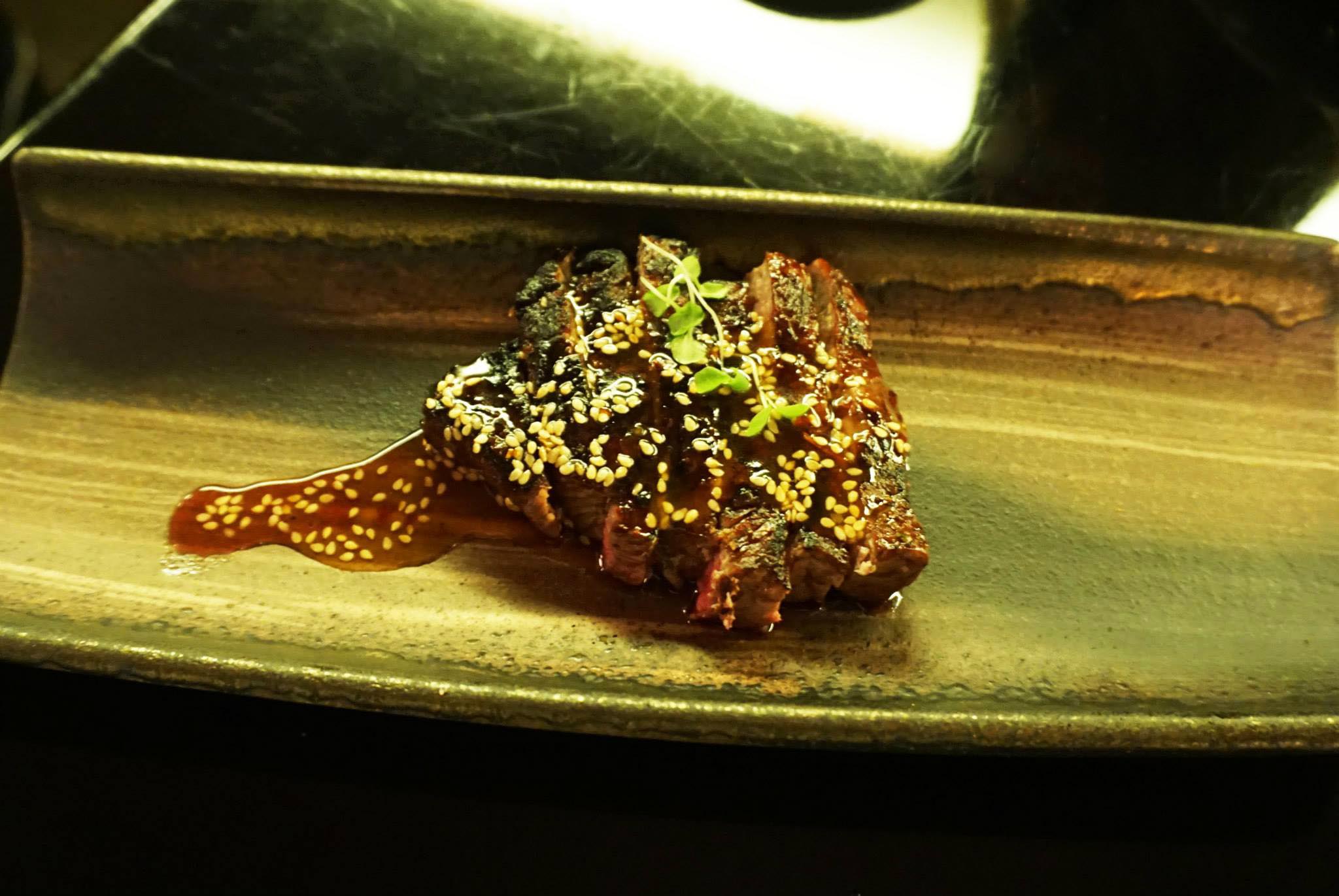 The lamb and steak were next to arrive, Mr C must really like the fact that I don’t eat lamb as he ended up taking this whole dish for himself and from what I can tell it was a really delicious one! I loved the smoky and burnt flavour to the scotch fillet, it was marinated with amiyaki sauce that brought a nice sweet taste. The meat was fairly tender and slightly dry but the sauces made up for that. 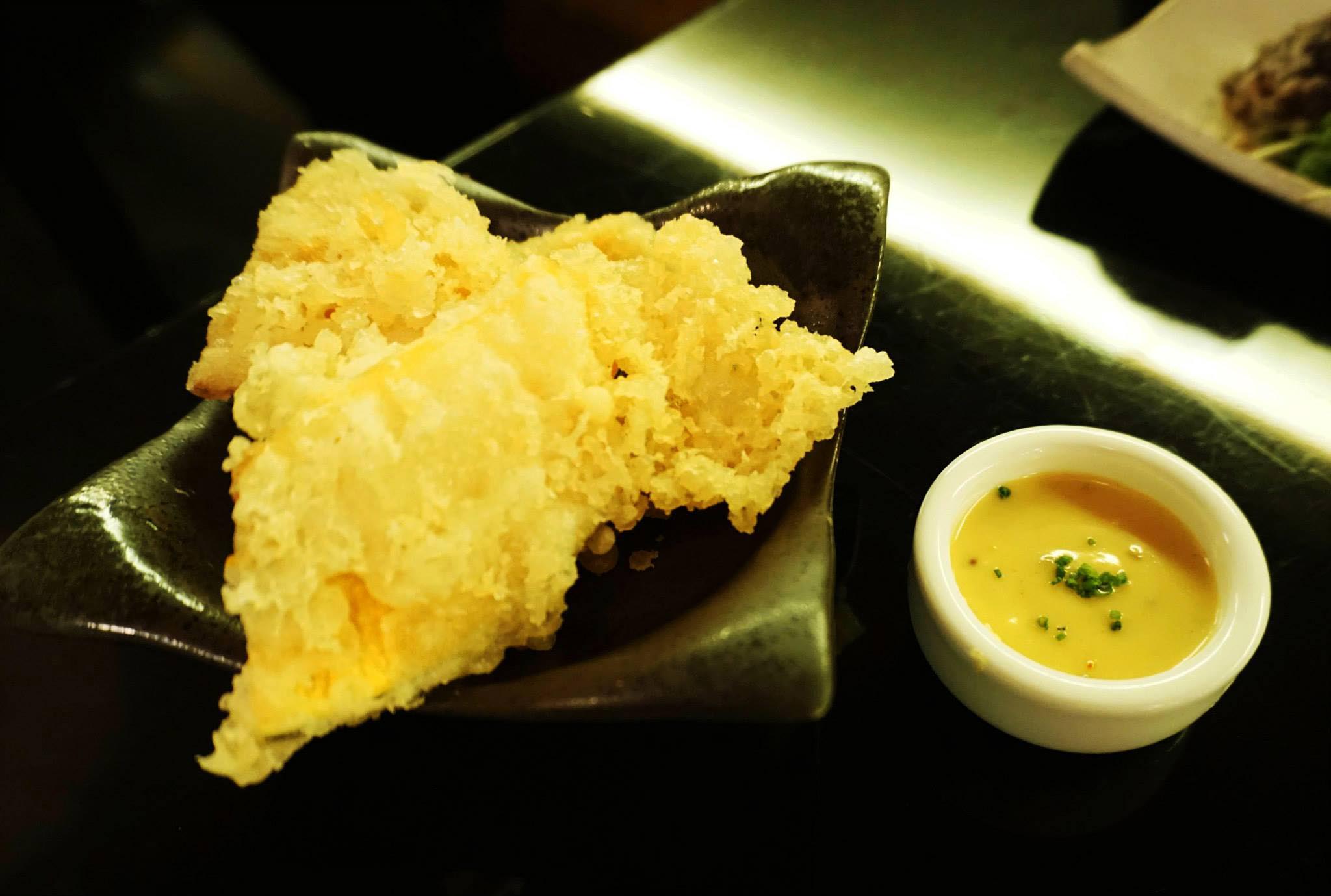 The pumpkin tempura was cruncy and nice but I thought it was a bit of a filler dish, neither of us found anything special about this dish that wowed us in any way. 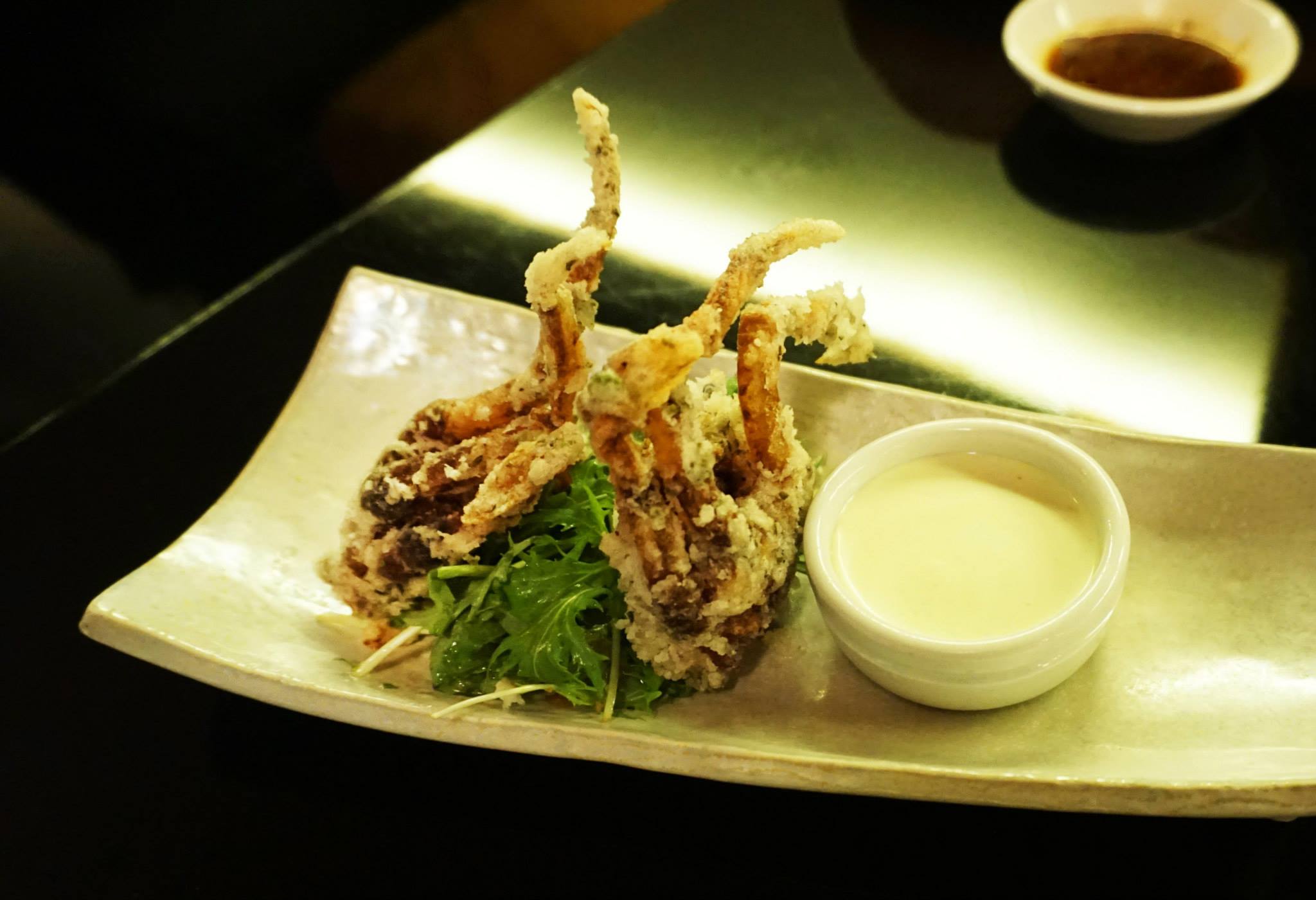 Since Mr C doesn’t eat soft shell crab (like I don’t eat lamb) this dish was completely mine. The crunchy and tasty crab was really nice and the best part would definitely have to be the wasabi mayo, I already love wasabi and mayo on their own but a combination of both is heaven to me. 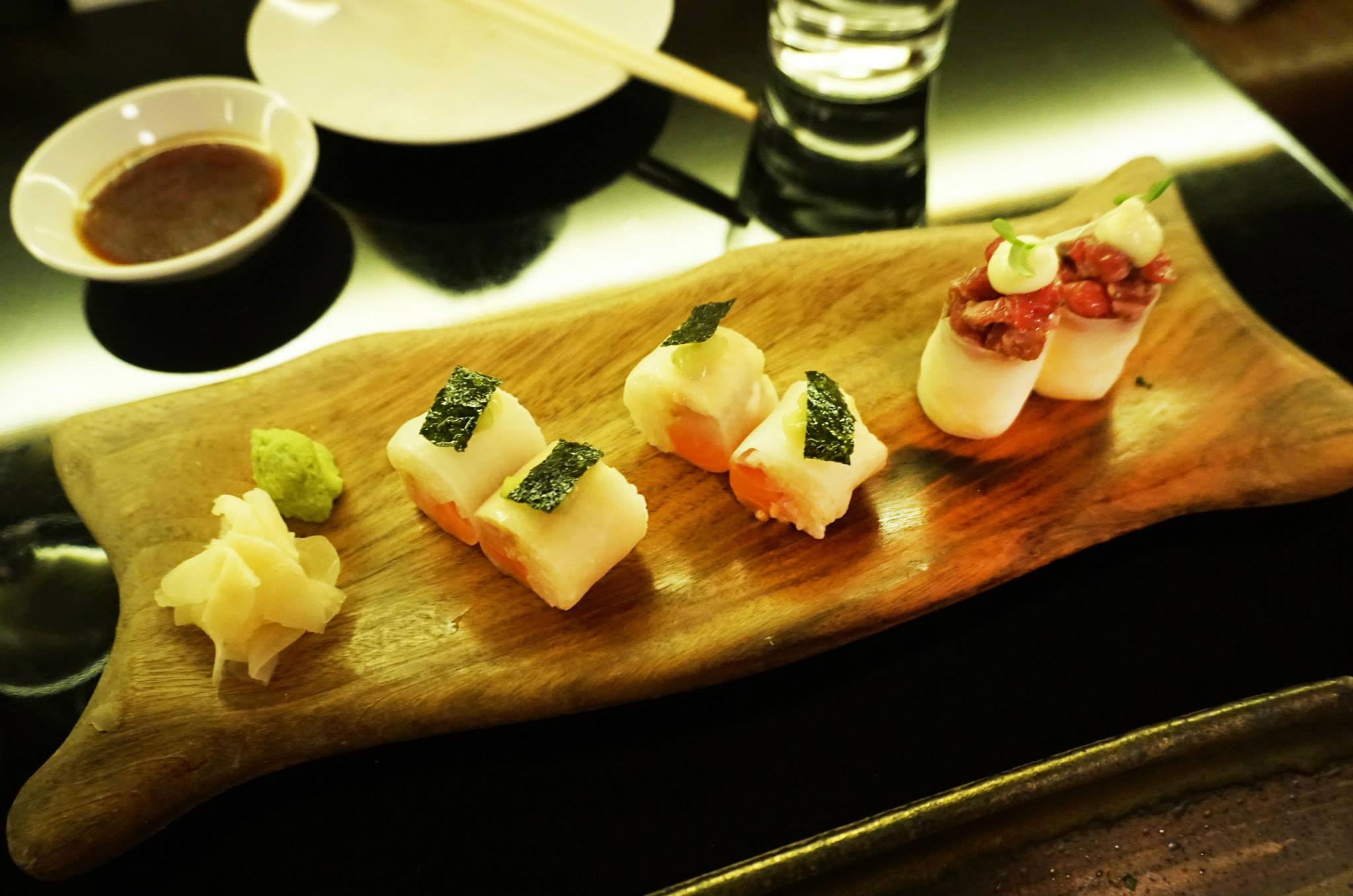 I know this is a mix plate of tuna, salmon and beef sushi but I just want to say upfront that the raw beef sushi was definitely the stand out. We’re huge fans of beef already but the texture and flavour explosion from the beef, mayo and rice was a clear winner. The sushi in general are very fresh and are prepared with an interesting skin of radish (or apple?) rather than seaweed which I actually preferred. 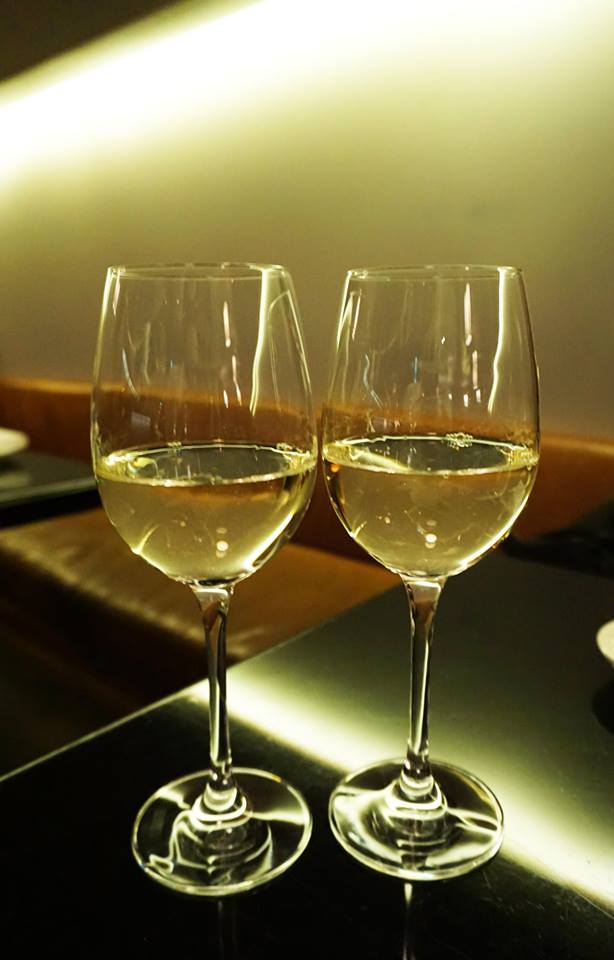 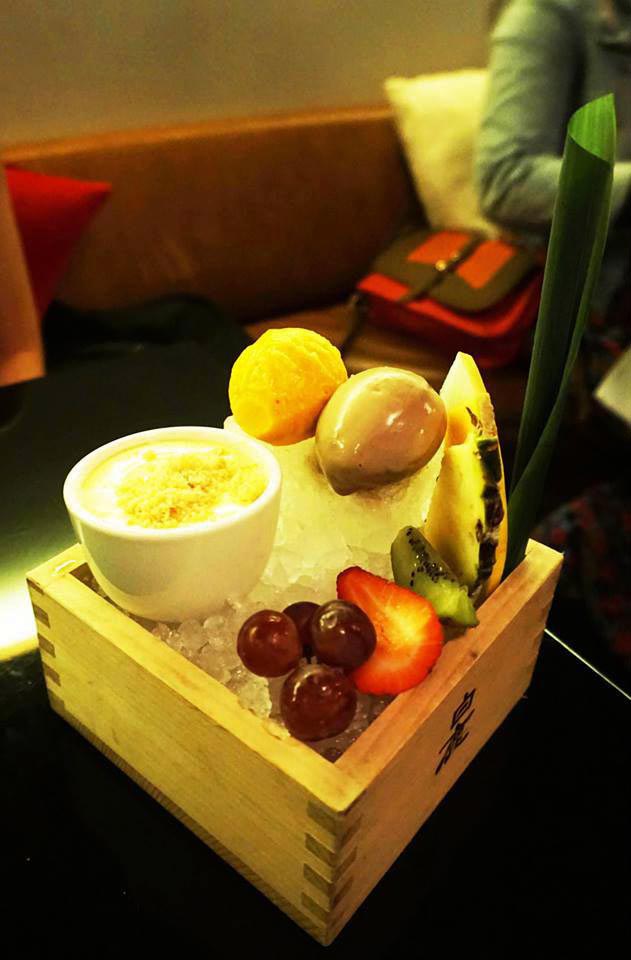 Our meal came with two glasses of white wine, they were a little bit average and we never figured out what wine it was exactly. The dessert on the other hand was quite interesting and we liked how it was served. The sorbet and gelato were really nice despite almost being melted when they had arrived, the rest of the dessert was a nice way to finish off the meal. 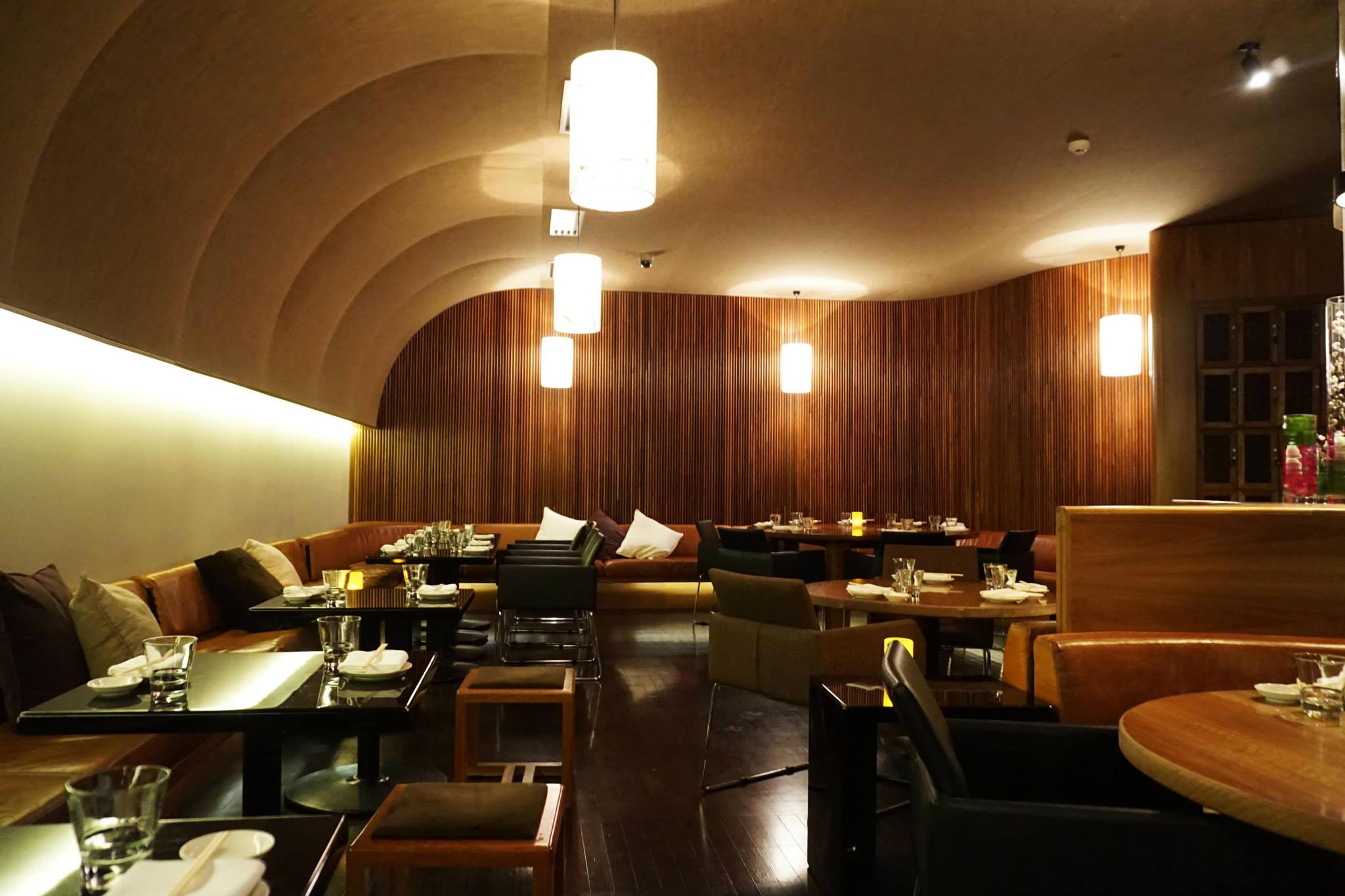 We tend to have our dinners a little earlier than most people, you can still see the huge lounge seating that goes around the edge of the whole restaurant, the space was eventually filled with people.

We really enjoyed our relaxed dinner at Tokonoma, the quality of the ingredients are really good and the majority of the dishes are done well. This multi course meal was bought from Groupon so it is very likely that the full a la carte menu is even more better in quality.