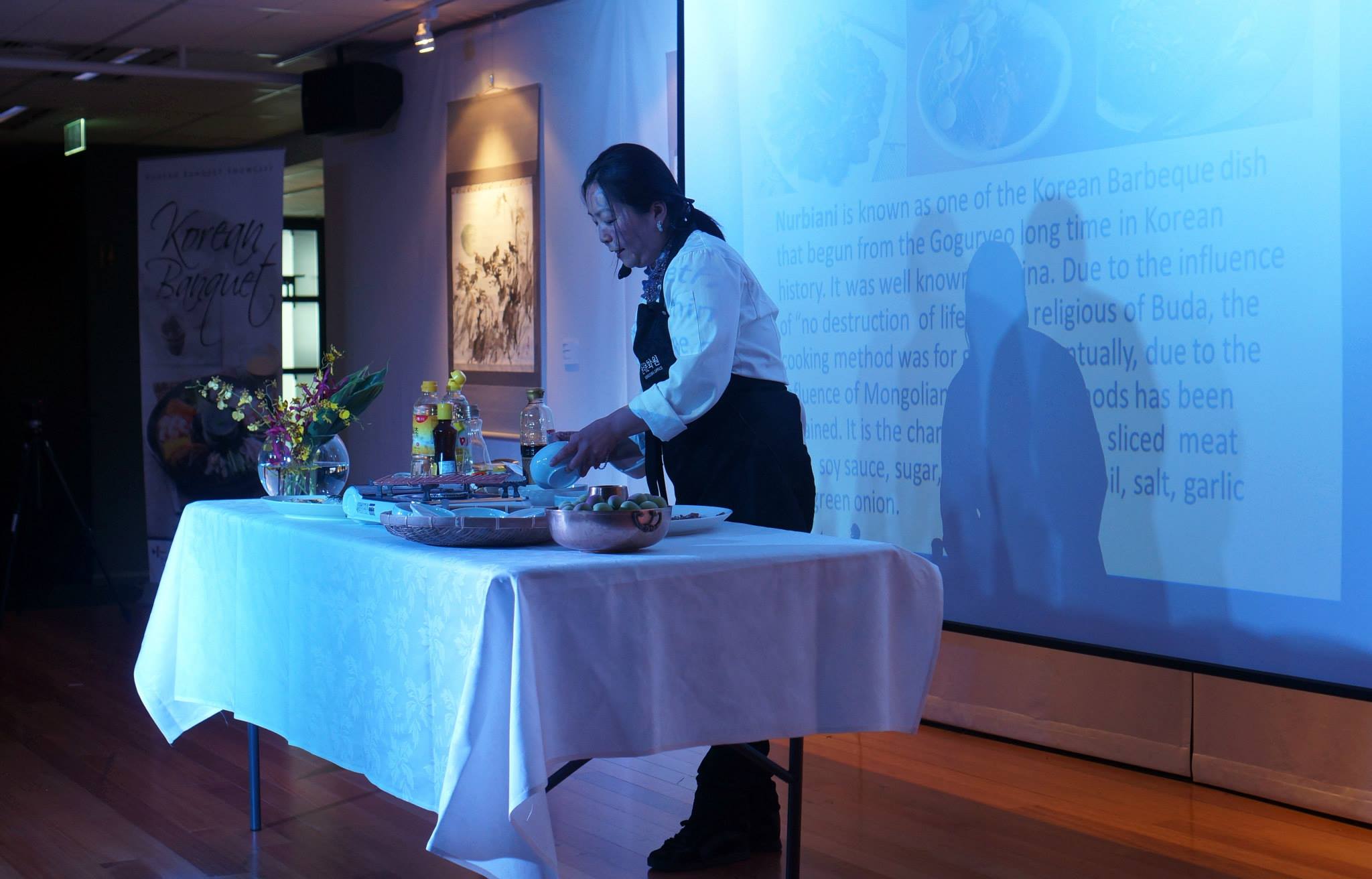 Miss K and I were recently invited by Irene Woo from the Korean Cultural Office to attend a Korean Banquet Showcase held at the KCO Arirang Hall next to Hyde Park. The event was attended by both traditional and blogger media as well as officials from the Korean community in Australia including the consulate general in Australia to promote Korean culture by way of introducing people to the cuisine.

The venue was beautifully laid out with traditional art and decoration adorning the walls and the tables set out very decadent. On the way in we noticed there were many gift hampers which we were quite excited to see – they turned out to be a heap of interesting Korean ingredients for cooking as well as plum and raspberry wine. 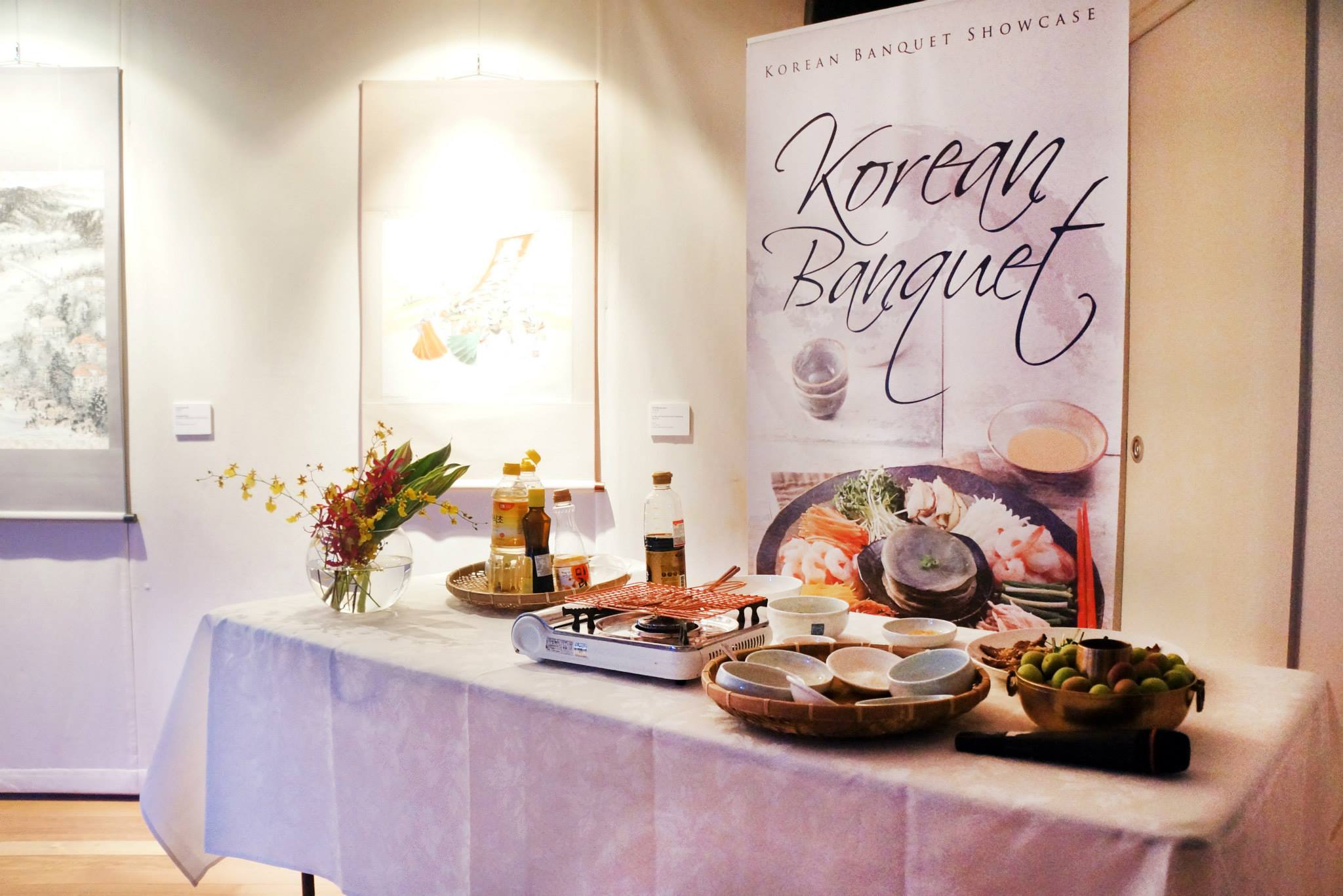 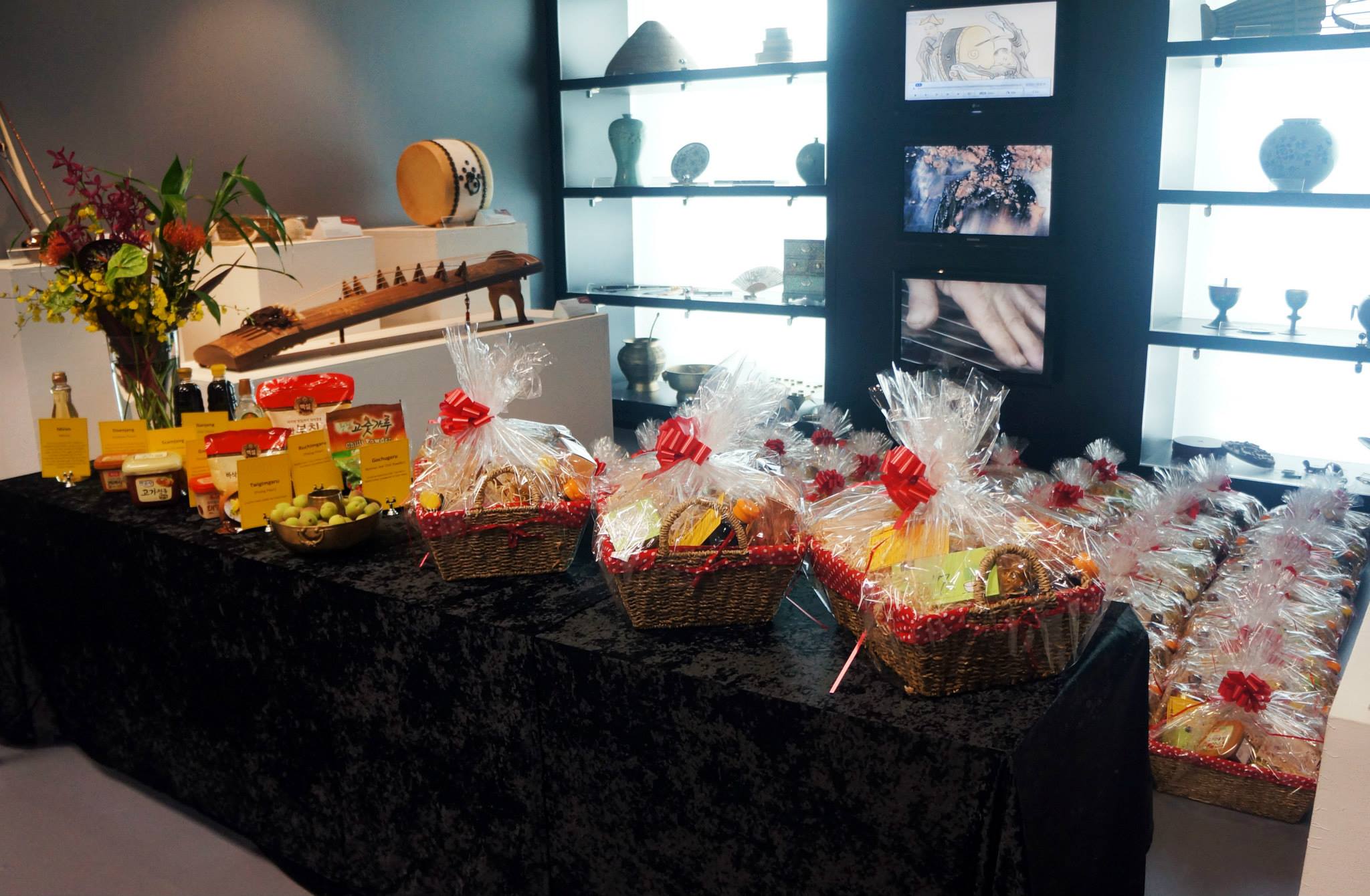 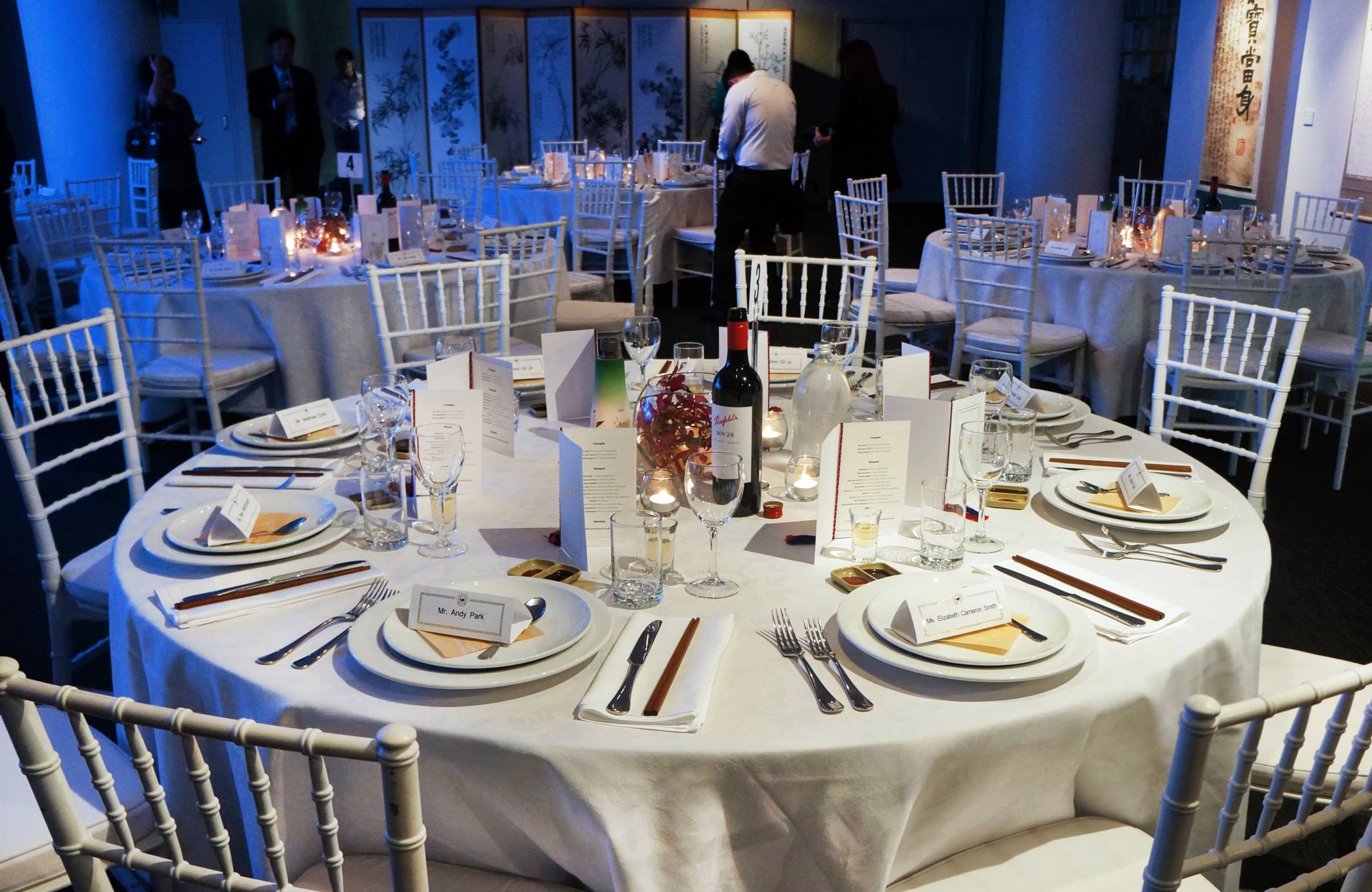 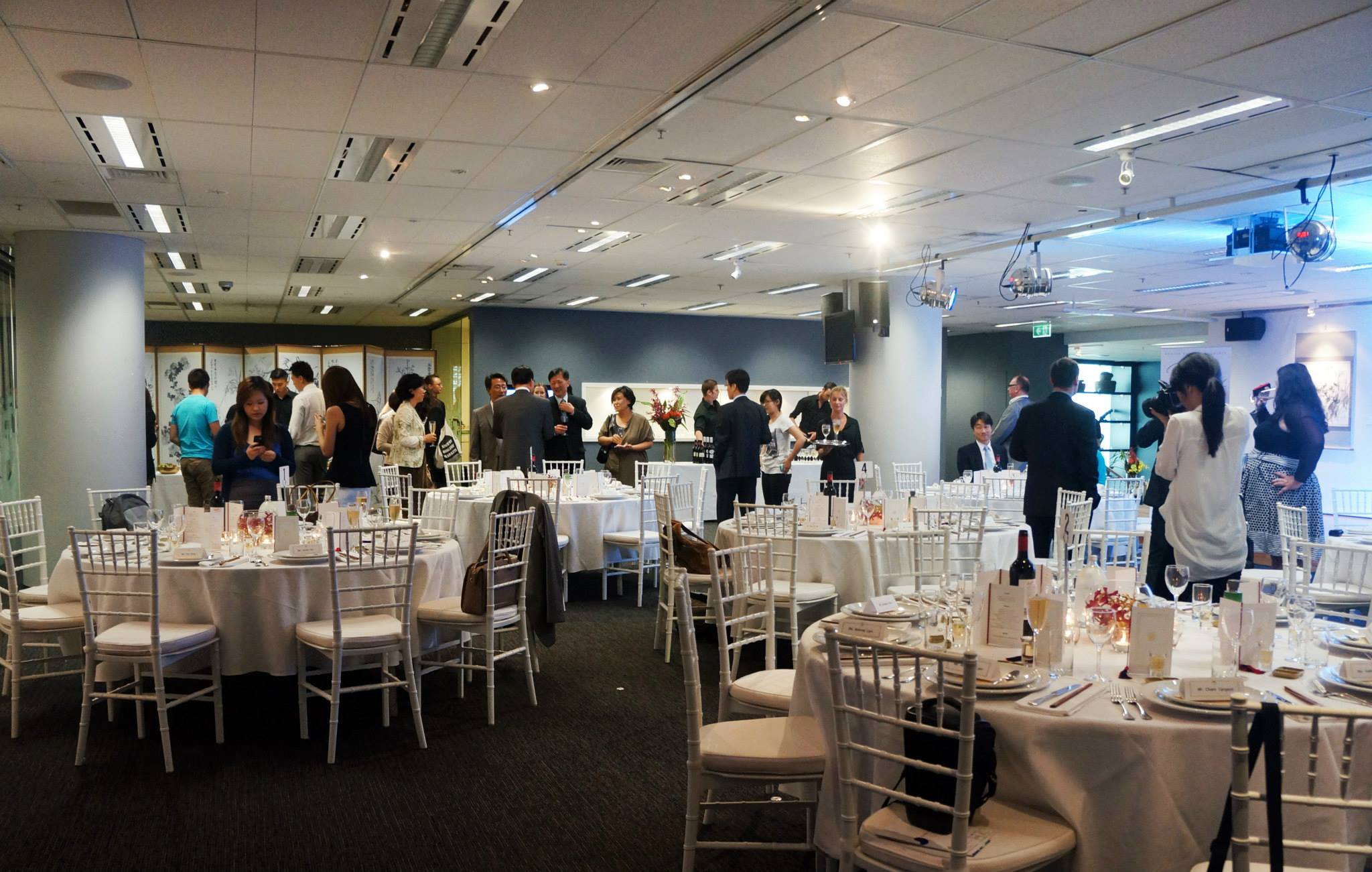 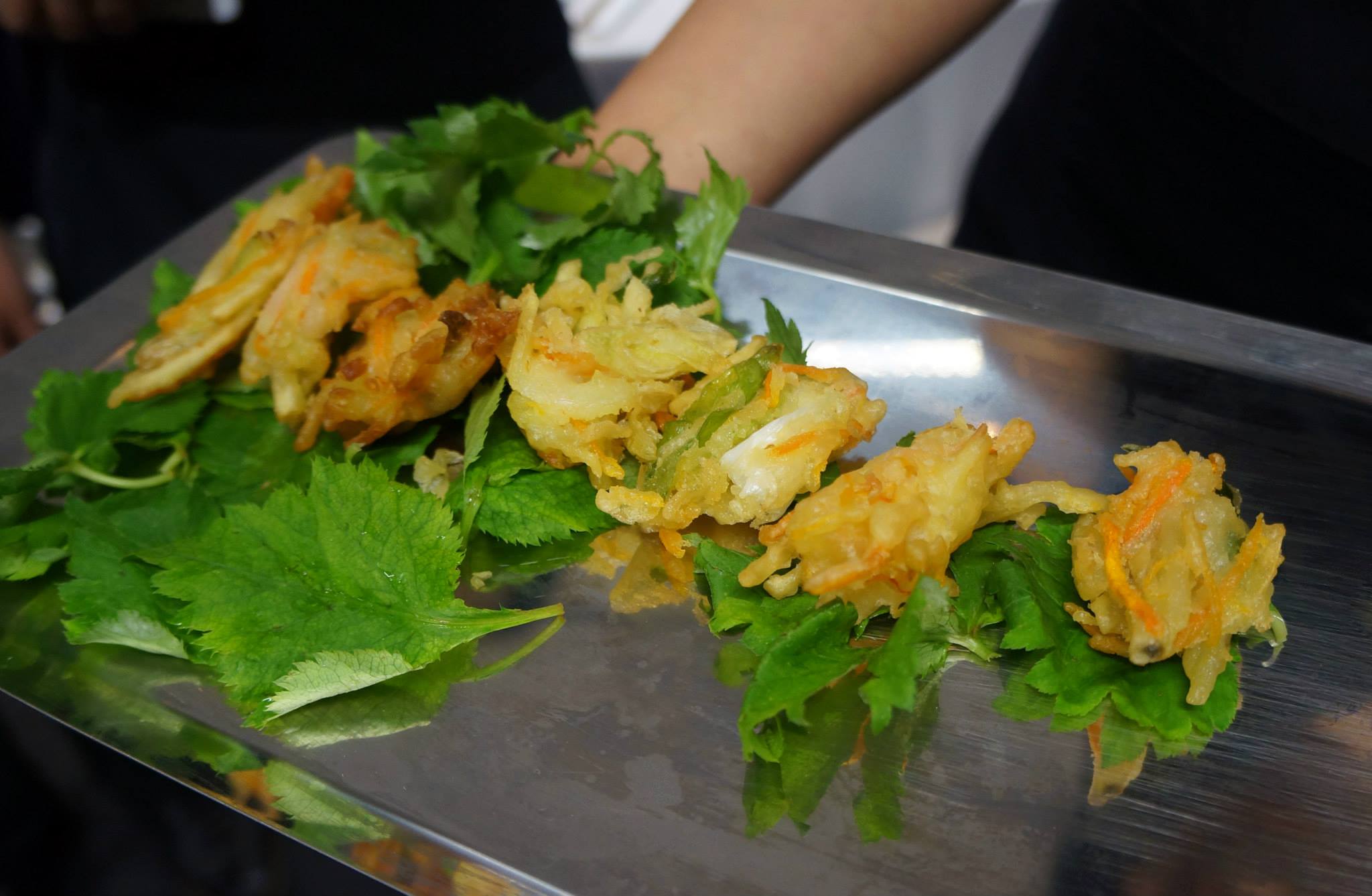 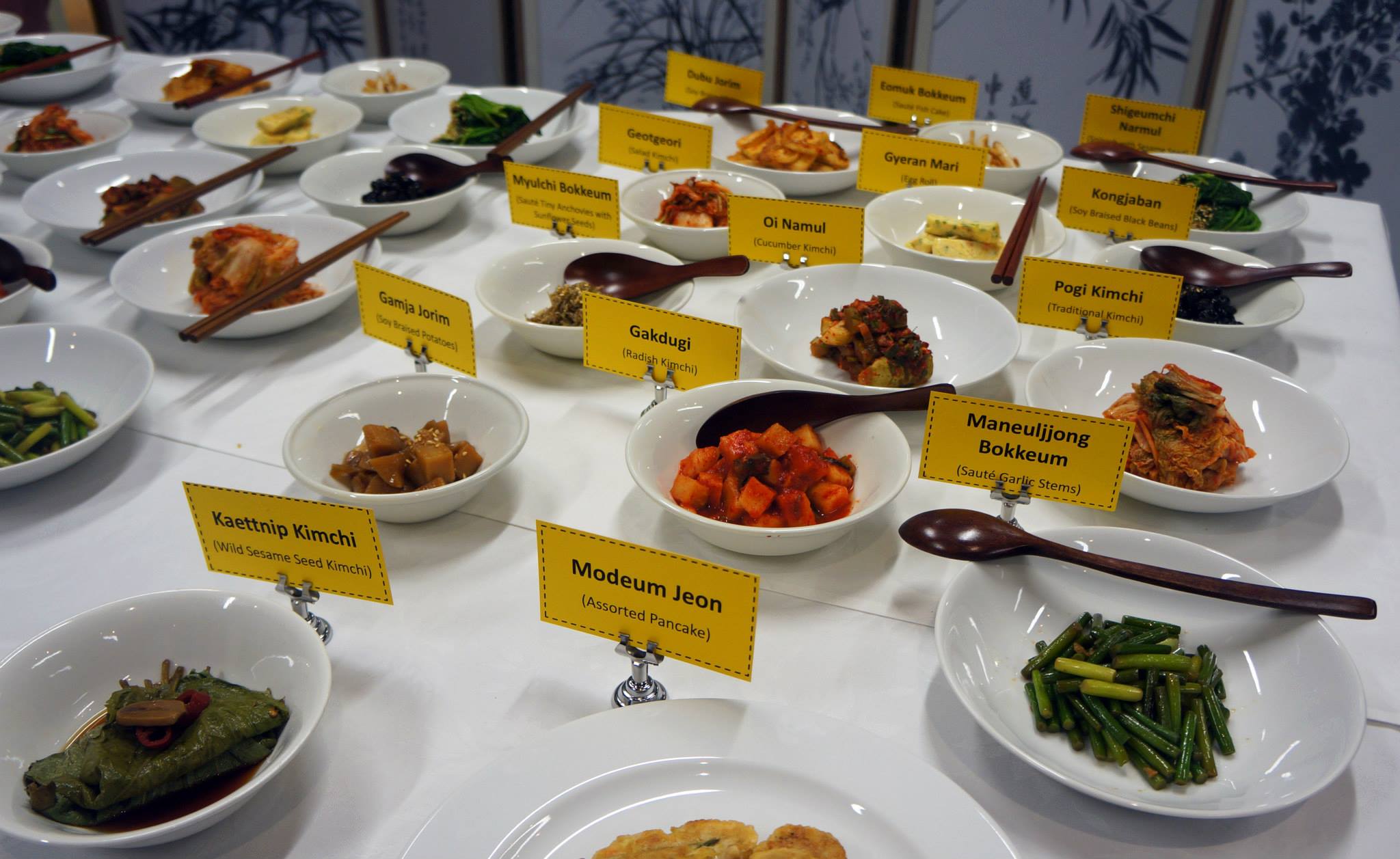 The evening started with canapes and drinks being offered to guests while they mingled around in the dining hall, seating was allocated to everyone and we quickly found our table and put our stuff down so that we could explore the venue and chat with some of our fellow food bloggers.
A table near the front of the room was piled with a huge variety of traditional banchan prepared by the head chef Heather Jeong who is a famous celebrity Korean chef in Australia, she later did a cooking demonstration before dinner was served. We were told that anyone could go up during the dinner to pick out anything that we wanted to try and bring it back to our table to accompany the mains which were being served. 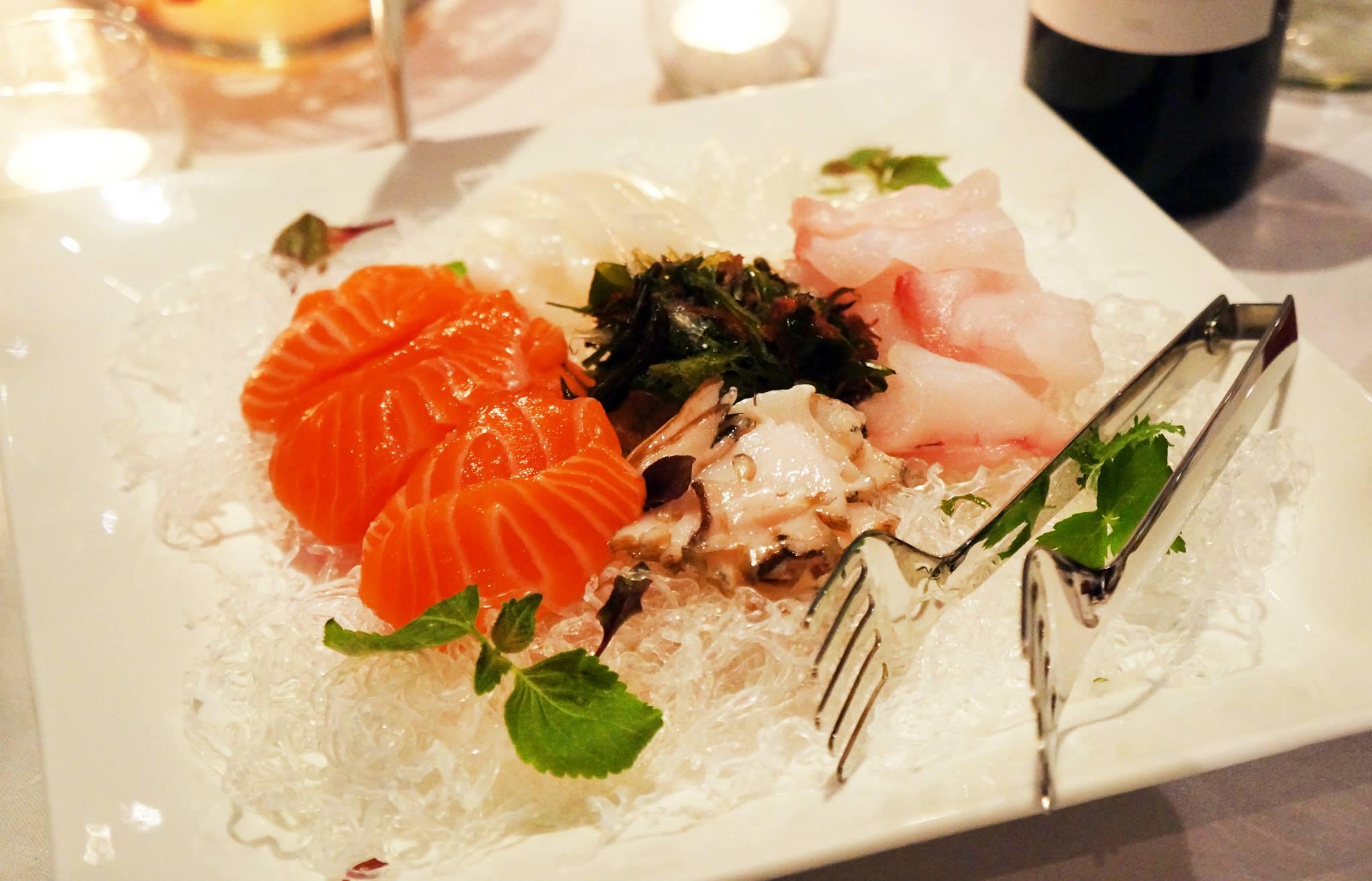 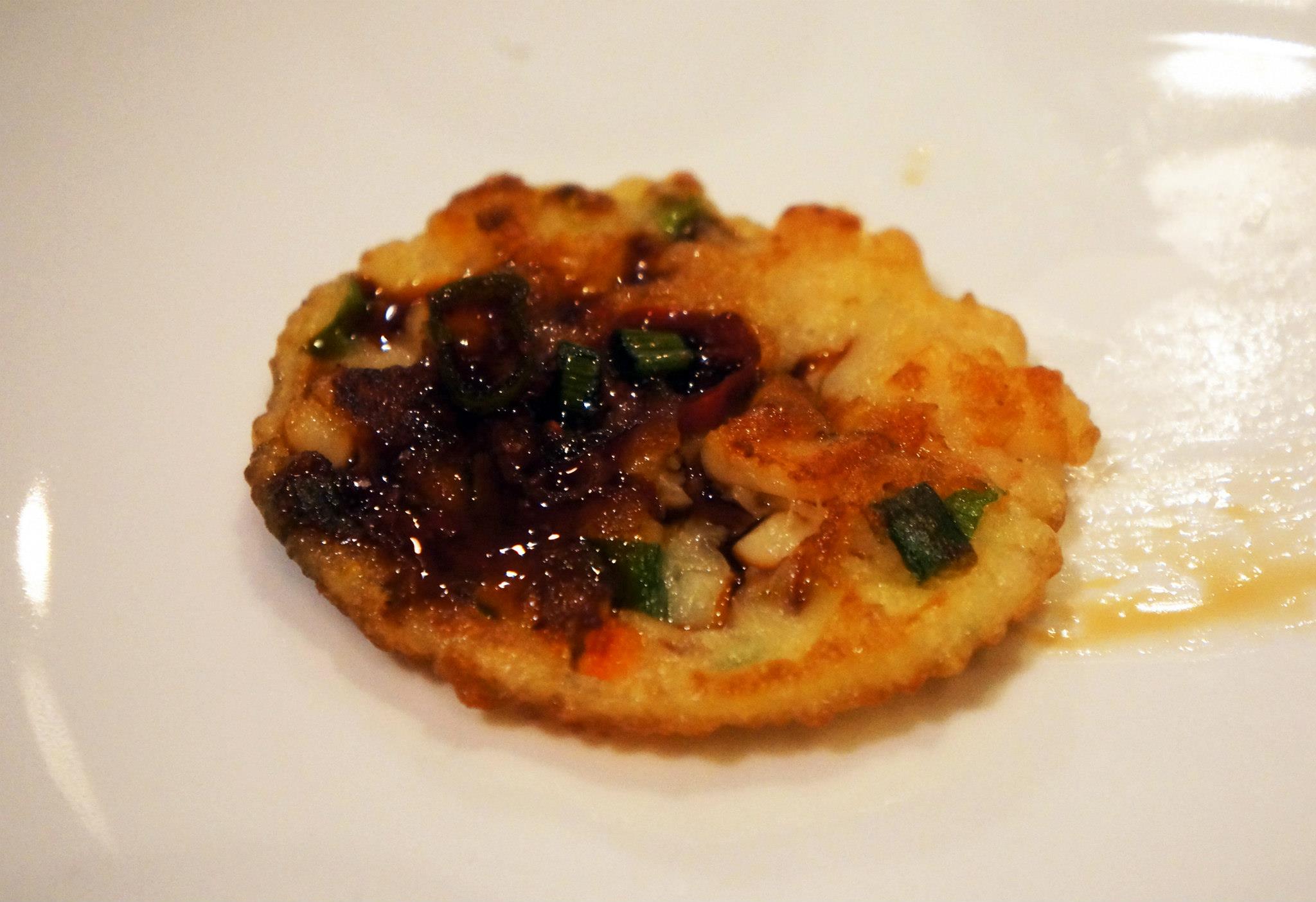 The first dishes to arrive were both seafood dishes, Korean Style Sashimi and Seafood Pancake along with a shot of soup similar to pumpkin which unfortunately we didn’t get a photo of. The salmon and kingfish sashimi was very fresh and served chilled with soy sauce, Miss K and I were very happy with the taste and texture and would rate it up there with the best Japanese restaurants. The seafood pancake was equally tasty and consisted of a very nice crisp batter and seafood mixture smothered in sauce. 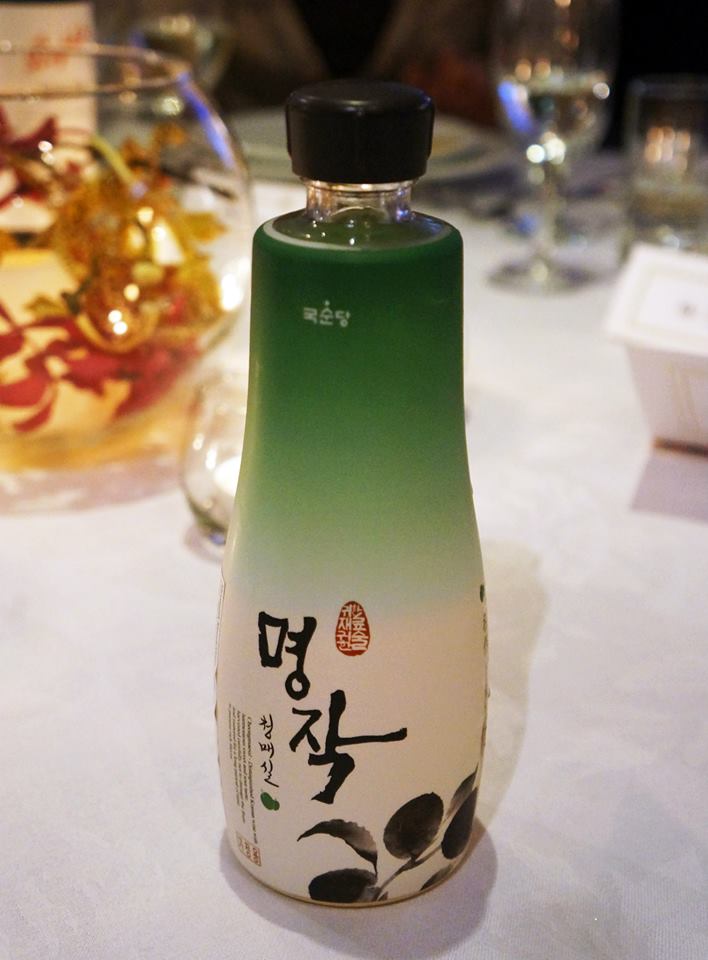 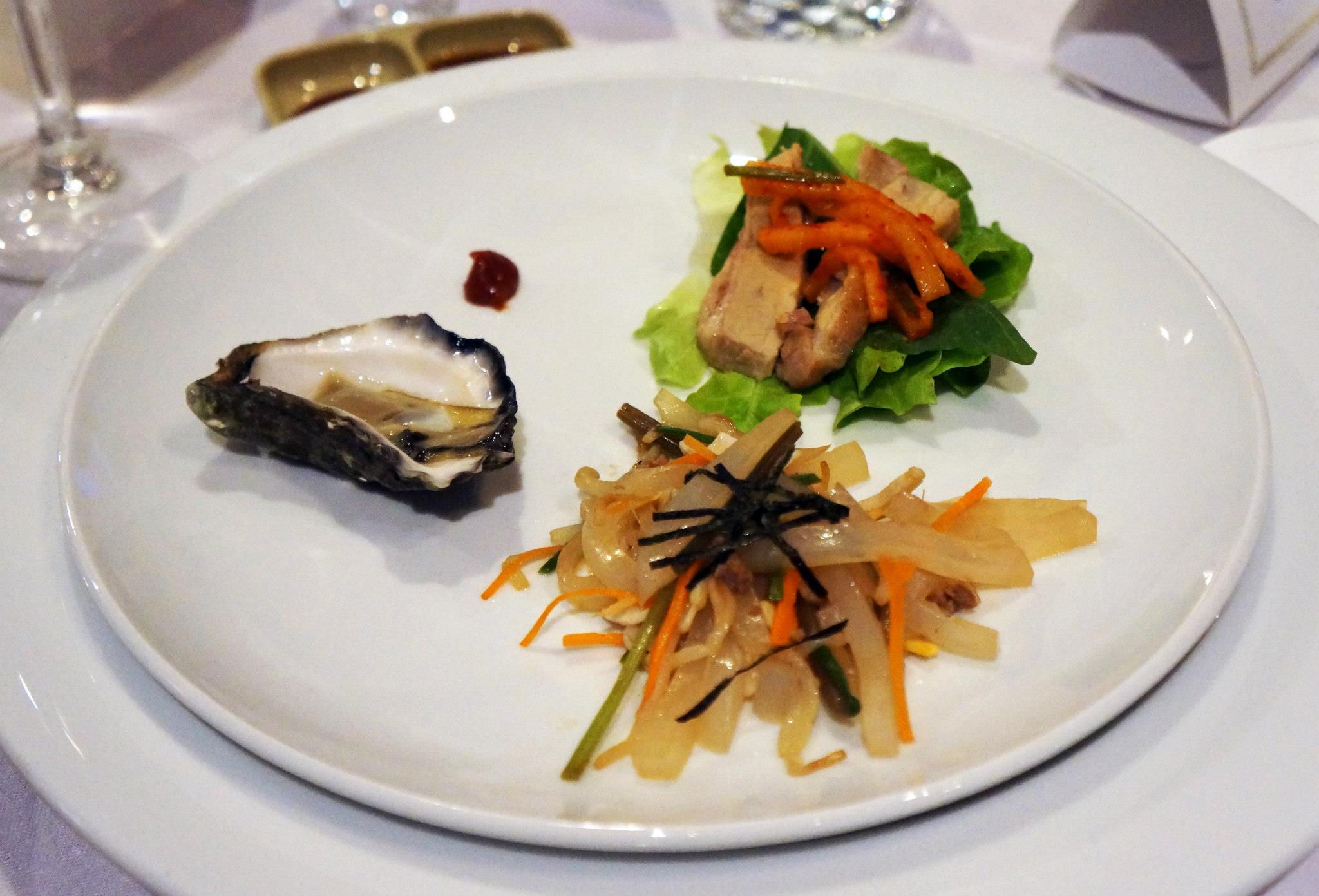 I’m always a fan of pork so this dish was great, especially with a side of delicious bean jelly. Miss K took my serving of oyster because she knows I’m not a fan of shellfish (aside from Scallop), she definitely enjoyed the oyster and noted that it was very fresh.
Along with the pork and oysters we also had a bottle of plum and raspberry wine to share between the table and I must say that it was a very refreshing and a perfect drink to go with the meat, something I would consider purchasing to have at home. 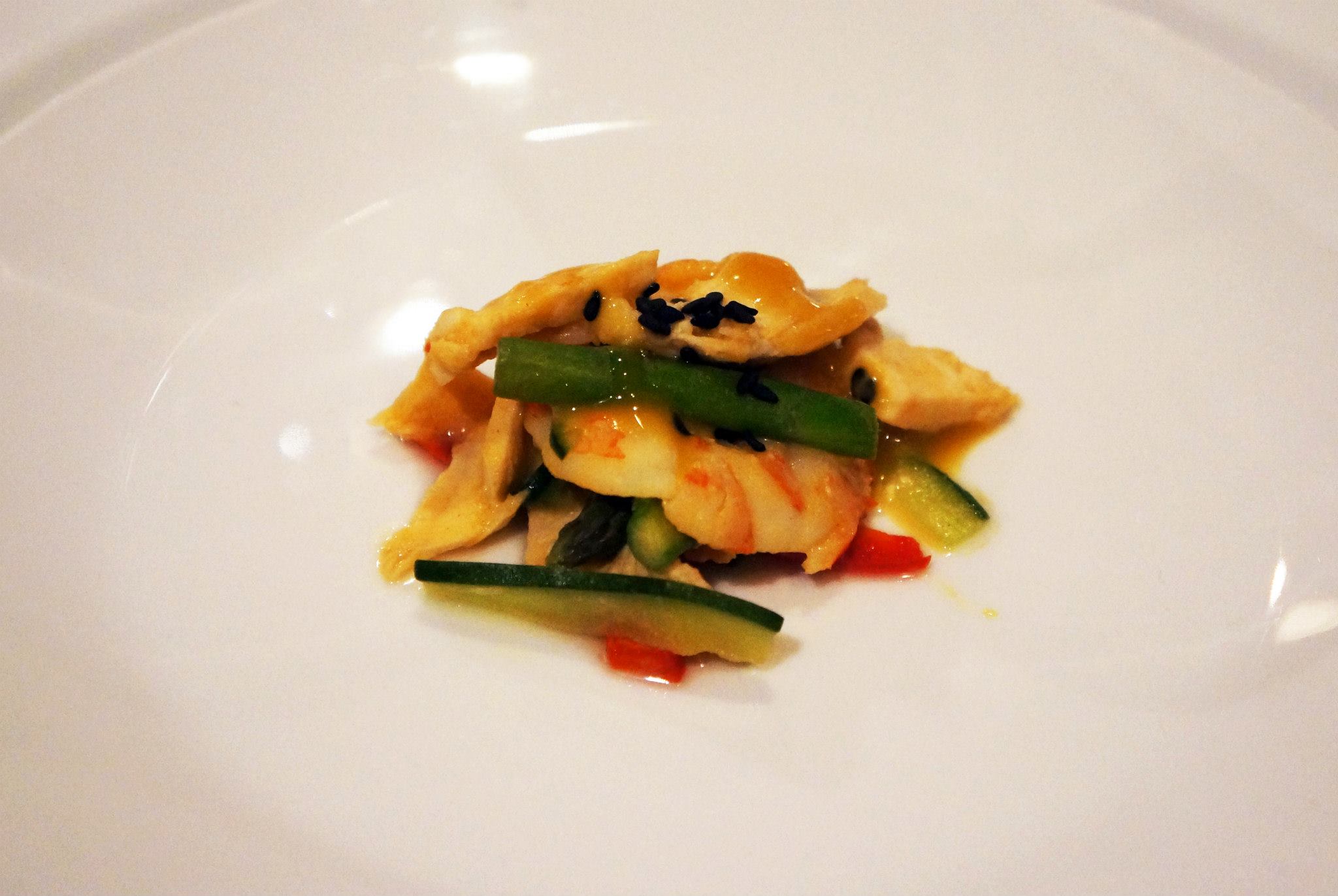 This was probably my least favourite dish of the night because I’m not really a fan of mustard, the salad itself was bland aside from the mustard dressing so I didn’t enjoy this dish very much. 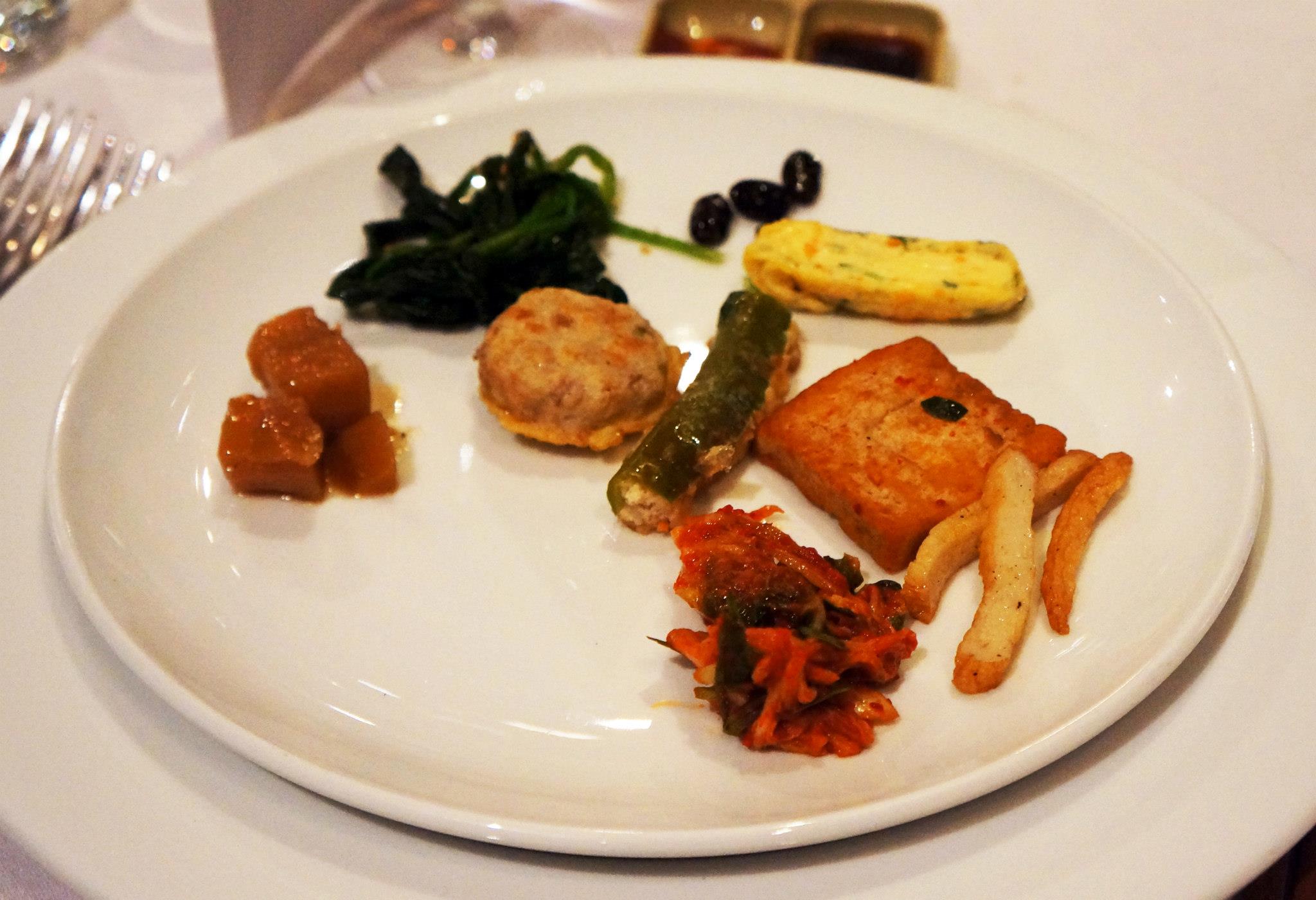 At this stage we decided to go up and grab some of the banchan to try out so we picked some of the dishes such as Kim Chi, tofu, fish cakes, omlette and radish. Daikon radish is a big part of Korean cuisine and is quite similar in taste and texture to potato so many people can easily enjoy it. 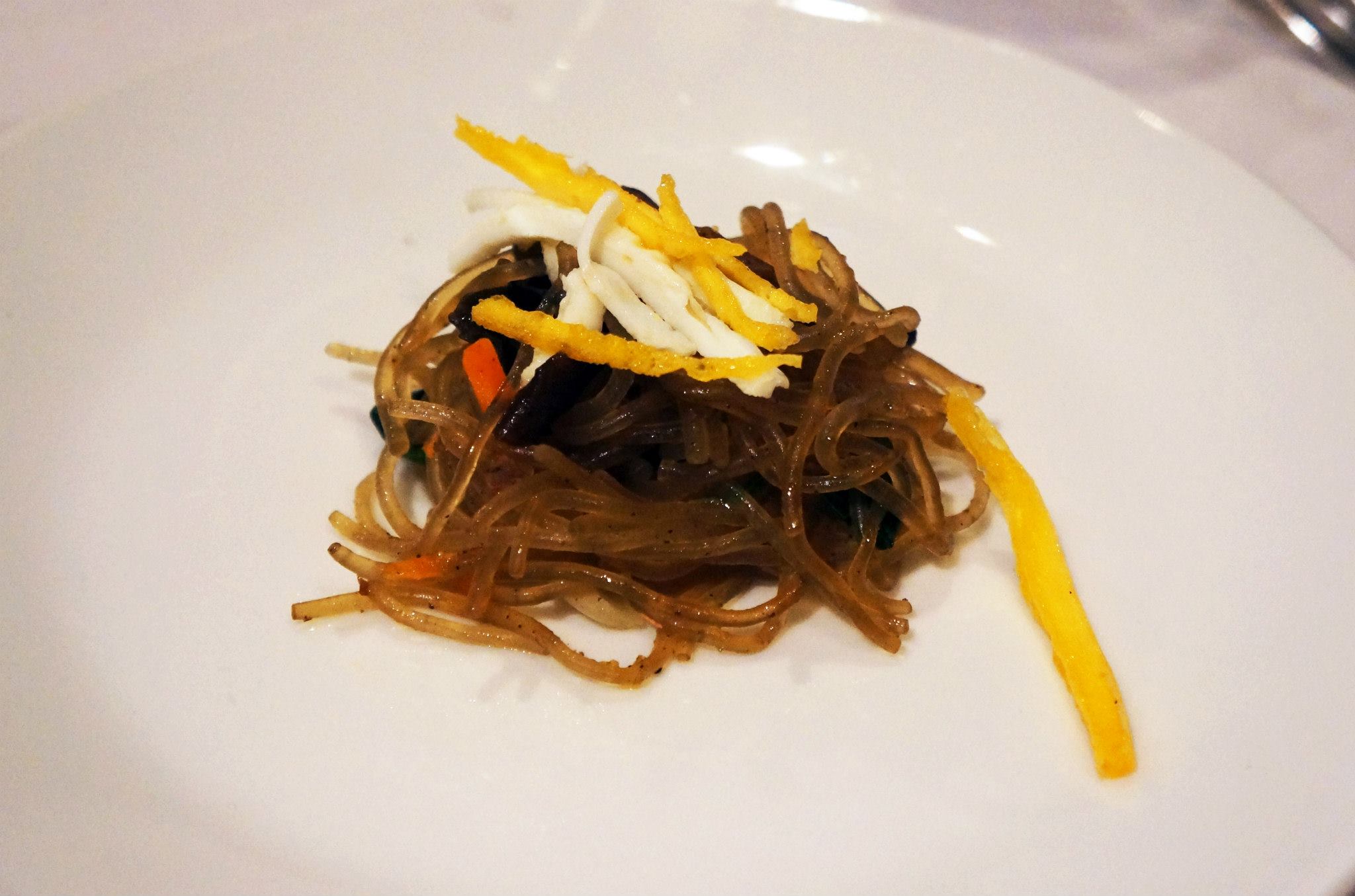 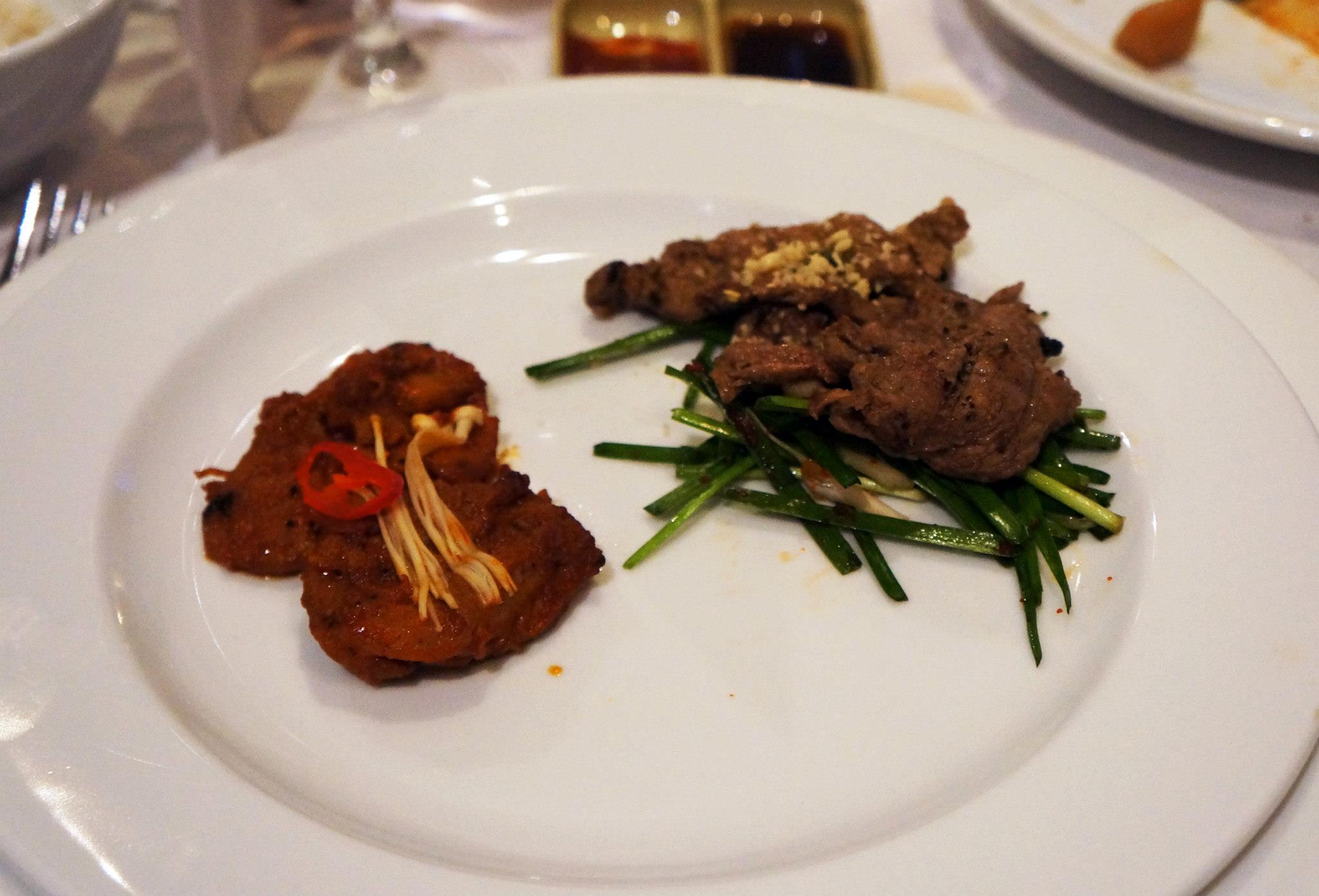 Having always been a fan of potato noodles I knew I would definitely enjoy this one when I saw it on the menu, the potato noodles were served warm with a delicious mix of vegies and meat, nearly all Korean restaurants in Sydney serve this so be sure to give it a go if you’ve never had it before.

Finally the dish I had been waiting for all ngiht arrived, the Fire Chicken and Beef Fillet – I’m always a sucker for any sort of meat but chicken in chilli sauce is definitely at the top of the list. This particular main was also served with rice and the meat was divine with soft tender meat and delicious marinades. 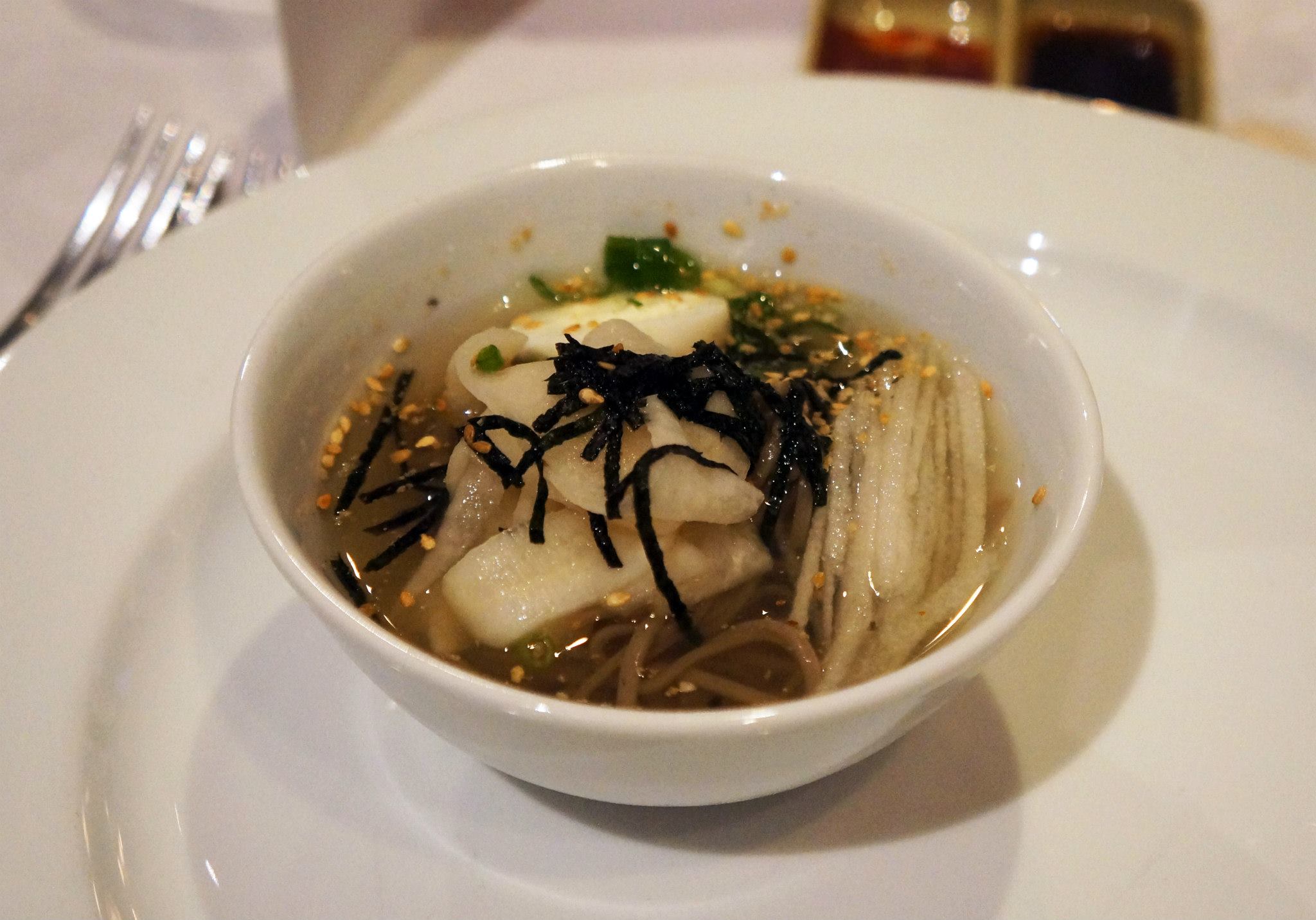 To finish off the night we were served Cold Soba Noodles which although were tasty (especially with the cold broth) we thought was kind of odd as a last main course.
The night ended with on a high note with thank you speeches from the KCO director and light dessert drinks. Make sure you go out and try some different styles of Korean dishes because there’s definitely more than just Korean BBQ out there which are unique and amazing!

Mr C and Miss K attended as guests of the Korean Cultural Office.
All views and opinions expressed are our own.